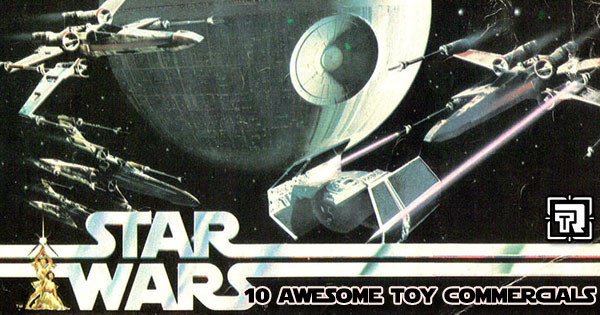 With #StarWarsDay on May the Fourth we decided to shift the focus f our weekly Saturday toy commercial column to Star Wars toys. Now, we didn’t want to just focus on the typical ones. Don’t get us wrong, there are plenty of great ones out there, we just thought we would focus on the more obscure ones like Ewoks, Droids, and even a few of the later ones. So stay in your Star Wars pajamas, grab that box of cereal, squeeze yourself some blue milk, and enjoy "10 Awesome Star Wars Toy Commercials"!

Star Wars Droids
As a rabid Star Wars fan, I have one regret, never buying anything from the Droids line. They are now rarer than finding a mint condition Yak Face. There are so many cool figures and toys in this line.

The Empire Strikes Back - Slave 1
I think it's funny now that the spot says "figures not included" yet it comes with the only way, at the time, you could actually get Han Solo in carbonite. It became a sought-after commodity despite Kenner actually making the figure after Jedi was released.

Yoda and R2-D2 (Sensor Scope) Figures
Why didn’t Kenner make a blue ghost Obi-Wan back in the day? They could have used the same mold and created a whole new figure. Hasbro certainly hasn't been shy about doing that for numerous incarnations of Jedi ghosts and holograms.

Star Wars Power of the Force - Special Edition Creature Pack
All right, the Jabba is terrible. With that being said, The Dewback is one of the best creatures ever produced by Hasbro. The Ronto also makes a fairly decent background filler too.

Ewok Toys - Kenner Preschool
If you are a younger fan of Star Wars, who didn’t grow up with the films arriving initially in the theaters, you may not understand why older fans detest the Ewoks. After watching this spot for Kenner’s Pre-School line, you may have an inkling as to why some of us did. Why make this stuff Kenner, when there were so many characters that never had figures made?

Electronic Naboo Fighter and Droid Fighters
Yes, to this day Naboo is still getting pounded.

Imperial Shuttle
To date, still, one of the best Star Wars toys ever made!

Star Wars Stuffed Ewoks
Wait a second, they have these kids on bikes and boxcar racers instead of the Star Wars Huffy Bike that was released? Yes, there was a Biker Scout Bike released.