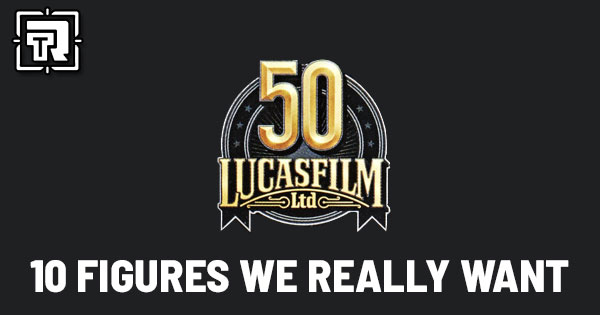 It appears that Lucasfilm Ltd., with Hasbro’s assistance, is celebrating the company’s 50th anniversary by releasing action figures to commemorate the occasion. I find it odd they are celebrating by releasing action figures from Star Wars and Star Wars only. The company was founded in 1971 and produced films before Star Wars. Since they are celebrating, I decided to deep dive into their character archives. I propose Hasbro should release a few other Lucasfilm Ltd. characters as action figures too. That is if they are going to commemorate the occasion.

The original Jabba the Hutt had a very human looking stand-in. Declan Hullholland played old Jabba and a figure of him is long over due. Hasbro has already made deleted scene figures of Camie and Fixer, as well as a few others. Declan’s appearance is close enough in our books and worthy of the 50th anniversary.

An action figure of the Death Star’s trash compactor monster is long overdue. It has appeared in video games and again (we think) in The Bad Batch. Where is our action of this monster? Hell, we got a Rathtar already.

The Droids cartoon series is ripe for figures that could be re-released for the 50th anniversary of Lucasfilm Ltd. I’ll be practical and know that it will probably be Boba Fett, R2-D2, or C-3PO. However, how great would it be to see the likes of Jann Tosh or Thall Joben?

Again like Droids, Hasbro and Lucasfilm Ltd. will probably give us a well-known character from the series, Wicket, all so they can re-use the mold. We'll probably see Wicket for the first time in the Black Series on an Ewoks cartoon series card. However, mix it up Hasbro and give us the Ewok villain from the series, Dulok Shaman.

Indiana Jones - Raiders of the Lost of Ark

Wait, what? Hasbro has the sculpt of Ford’s head countless times over. Why not release Ford’s Indiana Jones from the first film. It may be only a matter of time, like when Indy 5 arrives in theaters, but it’s the 50th anniversary of Lucasfilm Ltd. Why not flex those muscles and get Hasbro to bring back their Indy figures (especially in the style of the Black Series).

Yep, I said it. HOWARD THE DUCK. Sure there are probably all kinds of crazy likeness rights issues, but isn’t he a Marvel character (owned by Disney)? Wait, where are you going? Finish the article first before you start typing the legality of why we can’t get a movie-accurate Howard the Duck figure.

Lucasfilm Ltd. not only redefined the character of Indiana Jones but television too with this phenomenal series. Young Indy also help shape the technology that brought us the prequels. Why not give us Sean Patrick Flannery in his Verdun 1916 outfit?

Yes, it was produced by Lucasfilm Ltd. It features the King of Pop, Michael Jackson, in one of the best and craziest sci-fi musicals you will ever see. If they are celebrating their 50th anniversary, a Captain EO figure would be the perfect Disney Park Exclusive.

Again, it comes back to already having the Harrison Ford face sculpt from that era. Let’s do a figure of Ford as Bob Falfa and give us his insanely cool 1955 Chevy too. American Graffiti ushered in the era of George Lucas as a force at the box office, before Star Wars. The film deserves at least one figure.

Now ideally, a figure of THX 1138 played by Robert Duvall would be great. However, who wants a young, bald Bobby D in white pajamas? How about Lucasfilm Ltd. tap Hasbro to make one of the Android Police Officers. Die-hard fans of the film and Lucasfilm Ltd. would line up for these at Comic-Con.

Just a quick list. One that simply exists as wishful thinking on my part. Having more Star Wars figures is great but let’s fully embrace the Lucasfilm Ltd. plethora of characters for this 50th anniversary. Hell, I got close to putting General Walt Whalen on here from Radioland Murders (all in tribute to the late great Ned Beatty).