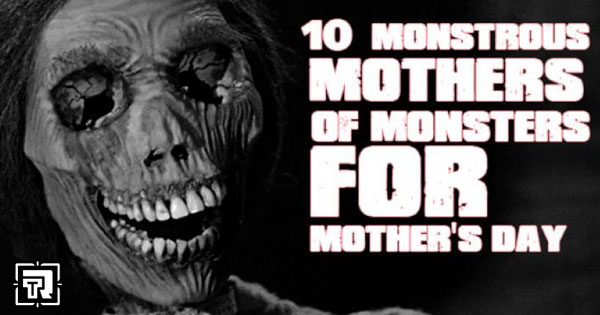 In celebration of Mother’s Day, we decided to pay tribute to the mothers who laid the groundwork for some of the most recognizable evil characters in film. Interestingly enough, Carrie White seems to be the only female monster with mommy issues.

Definitely the most badass of all alien moms. I mean, who else can give "birth" to that many kids, have her fallopian tubes ripped out by grenades, and then still have the energy to chase Sigourney Weaver up an elevator shaft before being vacuum sucked into space?

Okay. Would Grendel have been slightly less messed up without his creepy mom whispering evil in his ear all the time? Probably. Nevertheless, Beowulf put the tortured creature out of his misery and had to deal with the devilish beauty, himself.

Who hates the sight of their own child so much that they cover its face the first chance they get? The answer? Erik's (a.k.a. the Phantom of the Opera) mom. Her hatred and abuse of her deformed child rooted a sense of self-hatred and violence in the murdering, musical genius he became.

There have been hundreds of years of literary speculation as to the legend surrounding Morgana of the Arthurian legends. But, for our purposes, we shall refer to the movie, Excalibur. This ravishing, malicious temptress slept with her half-brother (Arthur) and the resulting son, Mordrid, was cursed. He grew up a disgrace to all that Arthur stood for and ended up killing him.

She always told her son she knew he’d be a dentist because he had a “talent for causing things pain.” Orin Scrivello D.D.S. knew his mother was proud of him for becoming the creepy, violent man of the tooth he was. He even gave poor Audrey routine black eyes! Just another mamma pleasing psychopath.

This mean mama was the ringleader behind the Fratelli brothers as the three of them chased the Goonies through the tunnels in search of treasure. While poor Sloth was in chains, this family of thieves would stop at nothing to kill the group of kids in their way.

Poor Frank. He was merely the product of a coke snorting slut of a mom who was out every night and never gave a hell about him. He grew up sobbing to his dead mother during and after every grizzly kill.

Not only was Pamela massively overbearing, but she was also more the insane antagonist of the first Friday the 13th. It wasn’t until a mysteriously revived Jason hides her head and remains that he takes over as the unstable, vengeful slasher we all know and love.

Norman takes the award for the man with the most mommy issues in film history. A horribly disturbed woman in life, Mrs. Bates continues to haunt her troubled son to the point where she overtakes his brain completely and, well, we all know what happens after that. People stopped taking showers.

Perhaps what is most unsettling about Margret White is that mothers like this are very real and even more common than we’d like to think. Twisted in religion and madness, Margret builds a monster in her daughter, Carrie, that is just waiting to break out and destroy anything in its path.