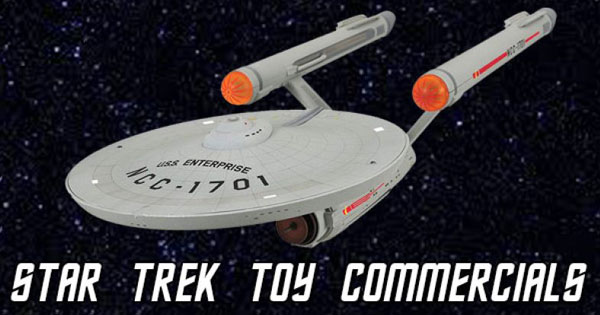 This week, in honor of the Star Trek Day 2020 (9-8-20, the anniversary of the first episode of TOS) we thought it was high time to celebrate Trek all over again with a look at some vintage toy commercials. It's just what we love to do on a Saturday! Enjoy Trekkies!

Mego Star Trek 3-Inch Toys
Apparently, the makers of the commercial knew nothing about Star Trek.

Star Trek: Intergalactic Projector
Really cool and awesome that it still exists, the commercial, on YouTube.

Star Trek: The Next Generation (Galoob)
I have never seen that cardboard cut out of the Enterprise before!

Star Trek: The Next Generation Toys (Playmates)
Love the lighting that is used here. This was after Season 3 and 4, clearly by the costumes and the Borg figure.

Star Trek: The Next Generation Bridge Playset (1994)
I am thoroughly impressed with how STTNG they cover here in figures and story.

Star Trek: Generations Action Figures (1994)
If only the movie would have been as cool as this TV spot.

Star Trek: TNG - Action Accessories
The Starships were great but it took a lot of complaints to get them to manufacture stands for them!

Star Trek: The Animated Series - Nickelodeon Commercial
We are big fans of the animated Star Trek series. Check out this vintage spot from Nickelodeon.