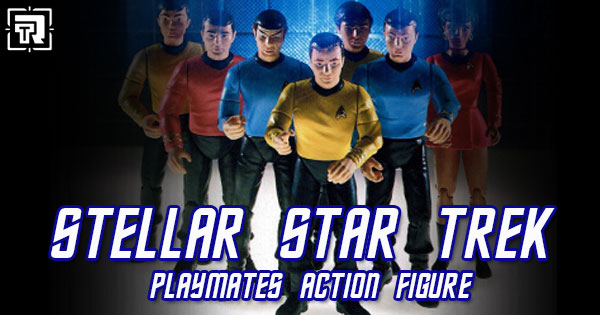 We decided to scan the entire Star Trek Playmates Action Figure line (from 1992 to 2009) and pick a top 10. There were a lot of figures in that line. Some varying in size and scope (meaning interactivity). We decide to keep it to just the 5-inch line and leave the starships for another day. Which means the Captain Picard Talk Series figure is out as well as that awesome Enterprise B. It also eliminates the far superior 9-inch Star Trek line. So before you shake your Tribble at us, this is a top 10 list for the 5-inch line. That run alone encompasses at least 100 figures.

The following are in no particular order.

Ah, the Gorn. Playmates tapped this character for his first action figure in decades. He is by far one of our favorites. If you feel the need to own a Gorn figure, this one should be easy to find (at a convention). However, the new Mego line has recently put one out (seen HERE).

If you can believe it, there is actually a variant to this figure (without gloves). Either way, you are getting Christopher Plummer as the Shakespeare quoting General Chang. One of the best Klingon characters to own, ever.

Here is the first Khan figure in Star Trek's entire history. That reason alone allows Khan to hold a special place for us. Which is the main reason he is in our top 10. If you need a better figure, Diamond Select Toys has released numerous and better versions as of late.

Yes, that is Doc Brown (from Back to the Future), Christopher Llyod under all that makeup. He certainly was the most cutthroat of Klingons in the Trek films, until General Chang. Our only complaint is that he does not come with his dog.

This Picard is one of the limited edition 1701 figures (they only made 1,701). Here we have Picard in the "It's A Wonderful Life" episode of STTNG called "Tapestry". In your opinion, was that really Q or was it God?

If you can believe it, this one was one of the first figures released in the Playmates line. If you collect Star Trek toys this is a must-have. The first part of this season finale still lingers in our memories with all the possibilities that might have played out.

This action figure of Admiral Kirk, from Star Trek: The Motion Picture, righted a lot of wrongs. The figures released for that film were terrible. They were either the 3.75" Mego or 12-inch plush dolls. This one is perfect. It even makes that uniform look good.

What? Who? Yes, we added the Andorian Inmate from "Whom Gods Destroy" because this figure is freaking awesome. Everything from his fuzzy boa to his space chair marks a significant turn in the whole line. Sadly, figures of this quality were few and far between.

Another figure on our list to have a variant (the other had all black accessories). We couldn't have a top 10 Star Trek list with without Mr. Spock and this is our favorite. Again, you can see how Playmates was really given their all towards the end. We're sure this is still tough to find, on the cheap, at a convention.

We tried to keep it to single figures, the "Fistful of Datas 3-Pack" came really close to being on here, but when it came to uniqueness and sculpt, the Species 8472 figure with Ensign Harry Kim is one of the best, if not THE best Star Trek Playmates figure.

It would be unfair not to mention this incredible box set of the original crew from the original series. Complete with bridge display, Playmates enabled fans to get them all in one shot. They were limited edition of course, but back then, it really held no weight with collectors. Still, a cool figure set and one worth getting if you can find it in good condition.