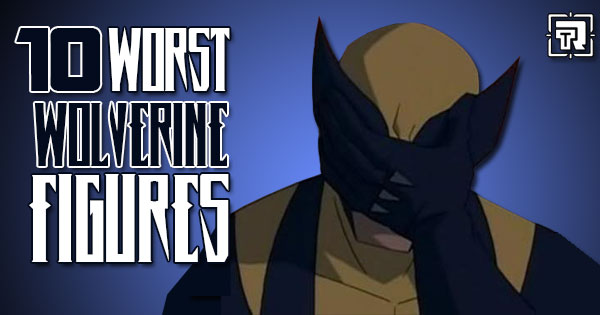 With all movie likenesses, cartoon likenesses and the all-important comic book renditions, there are a lot of Wolverine figures out there. The amount of Wolverine figures may actually outnumber the amount of Spider-Man figures. Wolverine, in action figure form, may escape some of the more ridiculous figures made of old webhead (I saw a Spider-Man action figure with a soccer ball and another with a surfboard once) nonetheless, he cannot escape the poor renditions and gimmicks of the toy makers.

I have to say that the majority of the list comes from a dark time when action figures were crap. They were cheaply made and uninspired. It is funny, though. If we go back further to the eighties and seventies we will see that many figures have endured and are still classics to this day. He-Man, Star Wars, MEGO, and G.I. Joe figures are still sought after by collectors. The following are not. So without further ado, the '10 Worst Wolverine Figures'!

10. Marvel’s PVC Wolverine
The early nineties were a tough time for action figure collectors. However, it was a time when properties like the X-Men finally got mass produced. Unfortunately, almost of all them were cheaply done. Marvel’s PVC “figures” were about as cheap as you can get. This Wolverine here wasn’t even featured with his mask on. It really was nothing more than a nineties version of a plastic army man.

9. X-Men 20 inch plush Wolverine
In 2000 the X-Men finally came to the big screen in Bryan Singer’s realistic portrayal of the characters. The marketing machine was in full force and what could be better than a 20 inch talking teddy-bear-like Wolverine for your kid to hug. Wait a second. How did your kid see this movie anyway? It was rated PG-13.

8. Spider-Man Origins Marvel Signature Series: Wolverine
MEGO style action figures never really have great crossover appeal from collectors to the kids. Hasbro released the Spider-Man Origins Marvel Signature Series and put all the characters in that line in their original outfits for when they debuted. Why there was a Black Suited Spidey and a Scarlet Spider-Man escapes me because the line was called “Origins”. They did put out a Wolverine for line and it was terrible. Mean-faced to add some savagery but his sleeper pajama outfit is just plain terrible.

7. X-Men Classic Wolverine (Light up Weapon)
This next Wolverine became an instant bargain store throwaway. Toy Biz produced a line of X-Men that had a light up feature giving a character like Gambit an appropriate burst of light. This was completely cool and fitting for the character. Wolverine with a light up gun, on the other hand, is as bad as his purple and blue suit. The screaming rage is a nice touch but he is too big, bulky and fat to be Wolverine.

6. X-Men Classics Wolverine figure (with Sentinel Attack Action)
He should have been dubbed "Saturday Night Fever Logan” or perhaps even the “David Hasselhoff”. This Wolverine is just plain goofy. It really is more like a Baywatch action figure doing a Bee Gees pose. Yet, let us give Toy Biz a little credit in that he is an improvement from its early uninspired days.

4. X-men Onslaught Wolverine
In its wake “Onslaught” created all sorts of problems for the Marvel Universe as heroes were left behind and other heroes were “Reborn” in yet another Marvel Universe. At least this failed attempt eventually gave us the Ultimate Universe and all became right with the world. What isn’t right with the world is this super savage Onslaught Wolverine. It’s only proportionate to young Franklin Richards. Sure figures based on comics are always fun for the collector but who really wants this Hulk-sized version of Wolverine?

3. Wolverine Weapon X
All right kids here is your birth of Wolverine figure complete with Speedo and television set helmet. At least the majority of the wires are painted on but this figure is as busy and the comics were in the day. The Toy Biz machine tried for something different but this wasn’t their lowest moment.

2. Talking Wolverine Action Figure
This action figure, released in 1991, did not talk but had a backpack to house the voice chip that did. He said 2 phrases: "Take your best shot." and "I've got claws. I can use 'em" and was supplied with the sound effect "Snikt!". A true nineties gem if the figure looked halfway decent. The samurai sword does not make up for the short claws or the unusually small head. Toy Biz obviously spent more money on the talking feature than designing a decent figure.

1. X-Men Marvel Civilian Wolverine Projector Action Figure
Complete with three different images from the 1995 show that Civilian Wolverine can project from his chest. This was not Toy Biz’s only attempt at such a figure but one has to wonder why Wolverine? Clearly, this could have been a perfect feature for a Professor X figure or even for Cyclops. Here Wolverine projects images of himself attacking others, which to me places this figure at number one on the list. No imagination or moving the figure is required because Toy Biz has placed a light bulb and lens inside Wolverine’s chest. They didn’t even hide the lens well.

In Stores This Week: Castlevania, Cthulhu and More from Diamond Select Toys!