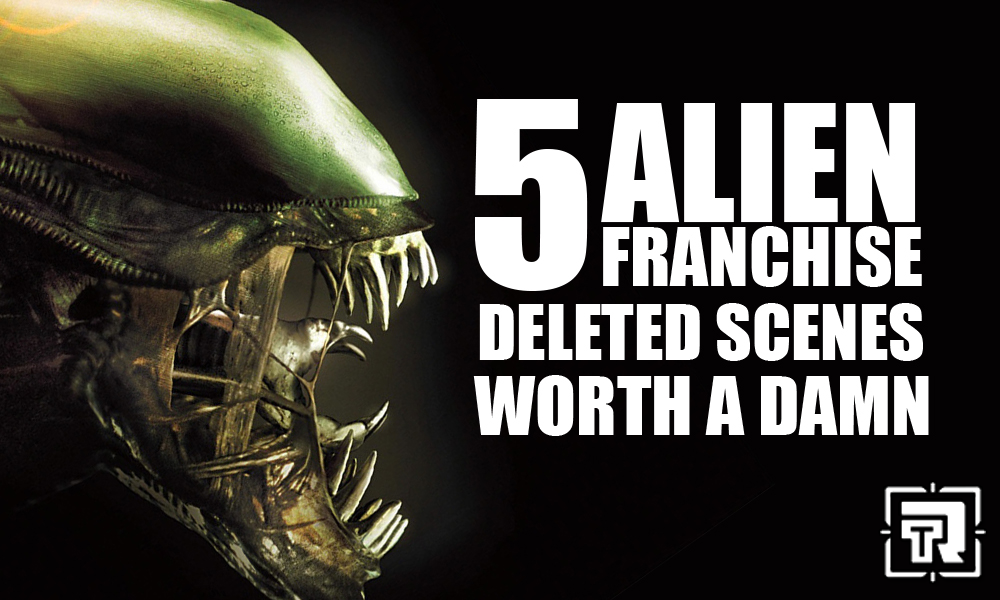 In celebration of #AlienDay (April 26th) 2020, we have combed the Alien Quadrilogy box set and our Prometheus Blu-ray (not Alien: Covenant) for all the scenes that ended up on the cutting room floor. What is truly amazing is how a select amount of those scenes have now become essential parts of the overall story that is the Alien franchise. There are a lot deleted scenes, many of which we had never seen before. To be honest, we fell down numerous rabbit holes on YouTube trying to locate them. When all was said and done, we came up with five deleted scenes that are worth a damn. If you haven’t seen them before, you truly need to pick up the next Alien Box set.

Writer’s Note: We tried to find something of note in the deleted scenes for Alien 3 and Alien: Resurrection, but it seems that they are as good as they ever will be.

Alien - The Cocoon
This scene is a great foreshadowing of things to come, however, it made the cutting room floor in the original Alien film. Thankfully, director Ridley Scott included it among the scenes he re-incorporated back into his director’s cut.

Aliens - Robot Sentry Guns
A fantastic scene that has made its way into the official director’s cut. It is an incredible tension builder and reveals a great deal about the Marines' opponents. A scene like this falls into that gray area where it isn’t 100% essential to the film, yet sheds the proper light on the nemesis who’s characteristics are revealed through their actions.

Aliens - Amanda Ripley
A sad scene, but another that found its way into the official director’s cut. This scene really cements Ripley’s relationship to Newt and adds another reason as to why she goes looking for her. The scene, also makes the opening events of Alien 3 all the more difficult to bear for Ripley’s character.

Aliens - Hadley’s Hope
This scene has also been placed into the director’s cut of Aliens. It is worth it because it establishes not only the world in which the colonist inhabit but who how profit drives people and corporations to do dumb things. Which is, essentially, the main theme to the Alien franchise.

Aliens - Burke Cocooned
This is the scene all Alien fans talk about. Yes, Ripley finds the sleaze-ball corporate guy, Burke, cocooned to the wall waiting for his fate. I only wish that Ripley would have left him there with no out. It reveals the depth of her humanity that she gives him a grenade and that is a great telling of not only Ripley’s character but Burke’s as well. He would never have done that for her. This scene has been omitted from any subsequent releases of Aliens.