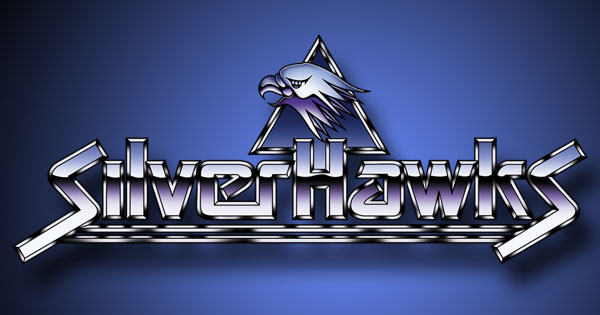 SilverHawks was a cool show if there was nothing else on. Seriously, if you could blindly watch the show, it was fun. If you watched the ThunderCats however, the parallels were too much. With that being said, I did sit through the SilverHawks, enough to never have seen Bluegrass (voiced by the ThunderCats' Lion-O, Larry Kenney) transform into one of the SilverHawks. Which was to actually pull his mask down and throws his wings out. This never happened, he just flew things and played his guitar. That became such a sore thumb to me... I am digressing. The cartoon was short-lived, the toy line was around long enough to sprout a Happy Meal tie-in. Enjoy this fun and sleek toy line from Kenner!

Quicksilver & Buzz-Saw
A lot of cool products revealed here, but what's up with the cyborg businessman (better known as Stargazer)?

SkyShadow and The Mirage
I love old school vehicles and these are really sweet!

Sky Shadow and Stronghold
I wondered why they doubled on so many vehicles and figures in different commercials. the line wasn't very big but a variety of products and characters help sell the brand better.

Tally-Hawk
So Bluegrass played the guitar and that became a weapon, but did he ever transform in a hawk?

Burger King SilverHawks Meal Pack Commercial
I actually had the two showcased in the spot!

Sprinthawk and Hardware
I still see Sprinthawk from time to time at conventions. It must have been massed produced.

Silverhawks (KCIK Promo) TV Commercial
Here is a taste of the show.