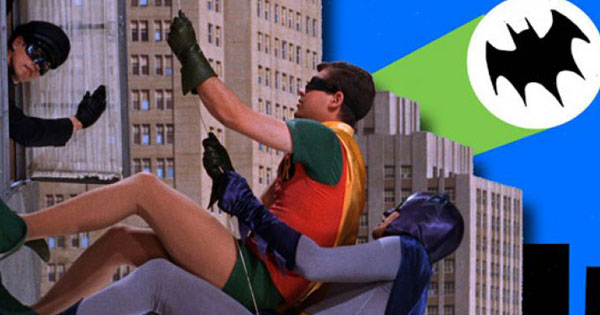 The series was only on for three years. It left an impression on the pop culture universe that has never dissipated. Since it is 80th anniversary of Batman we thought we would have some fun with the caped crusader and celebrate his “Crazy 8 Batman Window Cameos” Since the series went off the air, Bat-Fans have been subjugated to faded telecasts and cut up episodes. One of the many things that ended up on the chopping block was Batman’s famous “Window Cameos”. They are a collection of talent that crosses not only time but the impossible. Like much of the Batman 1966 series, just go with it and try not to think too much.

We could have shown YouTube clips with this article, but haven’t we seen enough of them; grainy and fuzzy completely not worth it? Check out the touched up Blu-ray collection for pristine visuals!

Cameo: Jerry Lewis
Episode: 29 - The Bookworm Turns
Air Date: April 20th, 1966
Villain: The Bookworm (Roddy McDowall)
This is the very first one, so it automatically makes the list. I’ve never been a fan of Jerry Lewis, but it was nice to see someone else deliver one of Robin’s “Holy...” lines.

Cameo: Dick Clark
Episode: 35 - Shoot A Crooked Arrow
Air Date: September 7th, 1966
Villain: Archer (Art Carney)
Batman and Robin are actually going down here. Clark has no idea who they are, but Batman knows he is from Philadelphia because he dipped his dip thing.

Cameo: The Green Hornet (Van Williams) and Kato (Bruce Lee)
Episode: 41- The Spell of Tut
Air Date: September 28th, 1966
Villain: King Tut (Victor Bruno)
The first of three occurrences where the Green Hornet and Kato are either mentioned or appear. Oddly enough, in this episode, they are known to Batman and Robin as crime fighters. When they appear in “A Piece of the Action” (Episode 85) they are believed to be criminals.

Cameo: Sammy Davis Jr.
Episode: 45 - The Clock King’s Crazy Crime
Air Date: October 12th, 1966
Villain: The Clock King (Walter Slezak)
Only the Candy Man, Sammy Davis Jr., would invite the Dynamic Duo into this pad to hear him rehearse. Then he tops that invite by asking them to come to his next show. If only Sammy would have made a full appearance on Batman.

Cameo: Werner Klemperer as Colonel Klink
Episode: 60 - It’s The Way You Play the Game
Air Date: December 1st, 1966
Villain: Shame (Cliff Robertson)
Wait... what? Yes, somehow Col. Klink has traveled through space and time and left WW2 Germany for 1966 Gotham. What is even more confounding is Robin telling him to say high to Col. Hogan for them.

Cameo: Santa Claus (played by Andy Devine)
Episode: 66 - The Duo is Slumming
Air Date: December 22nd, 1966
Villain: The Puzzler (Maurice Evans)
Batman sums it up perfectly, “If you can’t trust Santa, who can you trust?”