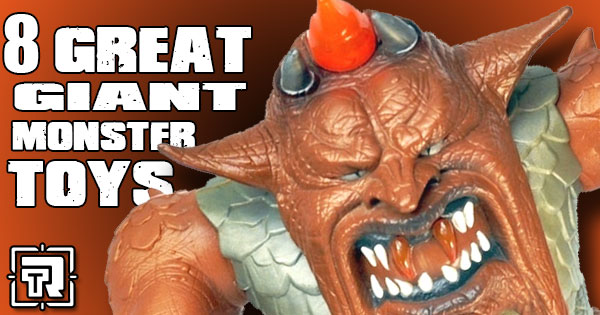 Big toys are always the best and when they are monsters, even better! I started thinking of all the big monster toys that I really loved and which would reign supreme. First up, I knew there wouldn’t even be a G.I. Joe toy in this lot. Golobulus, though very cool, can’t stand up to any one of the Inhumanoids. So, which are the “8 Great Giant Monster Toys”? Well AFJ has that answer for you!

Imagine you are a Geologist and you uncovered a secret passage to the Earth’s core. Now imagine you unleashed a horrible collection of monsters bent on conquering the world. That was the premise for The Inhumanoids. The leader of the three giants was Metlar, a sinister villain that would make Hades himself turn and run. As Herc Armstrong (great name by the way) you had your work cut out for you.

By the point this badass showed up, Aragorn seemed unstoppable. He had killed just about every kind of bad guy in Middle Earth. Naturally, they had to throw a monster at him that was larger than life. Even though he was a bit dumb and slow he still gave our hero a quick run for his money.

One of the best Marvel Universe Titans is Galactus. Complete with his herald, Galactus is an intergalactic monster. Equally impressive is his everyman adversary, Norrin Radd; a man who will stop at nothing to protect the world and woman he loves (not pictured).

4. The Kraken - Clash of the Titans - Mattel

Standing at an impressive fifteen inches tall, the Kraken is the crown jewel in the original Mattel Clash of the Titans line. As the original monster big boy, this was the one to have if you were a fan of the film. Can you believe that Medusa didn’t even have a figure?

It was the stuff of old myths and even Godzilla movies. How does one take down a 5-story beast? How does a Jedi do it without a lightsaber, too? Great stuff and a perfect monster of a toy, if ever there was one. Which one is your choice,  the original, the POTF, or The Force Unleashed?

There are plenty of big Transformers out there. Many of these have an equal. None of them compare to Unicron. He was only the size of a planet. For a monster that wiped out whole worlds, Rodimus Prime certainly had his work cut for him.

He is the “King of Monsters” and a true hero, well one that unleashes a fury of destruction, but a monster of a toy nonetheless. Mattel’s Godzilla, from the late seventies (early eighties), is still an incredible toy with its fiery breath and rocket shooting hand. Mattel has relaunched a lot of great products over the years, this one needs to make a come back as well. Whether it be yard sales or flea markets, I’m always on the lookout for this monster toy.