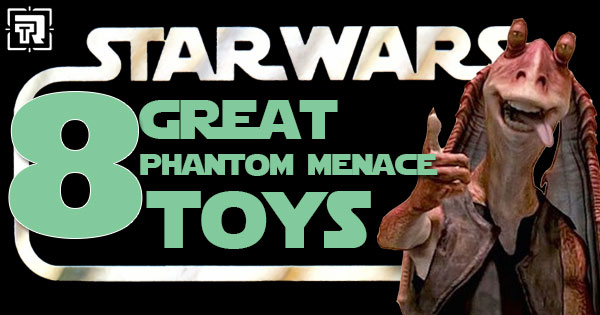 Who else stood in line at midnight at a Toys R Us or a Wal-Mart in 1999? The hype was building and the frenzy was practically ravenous. We charged in with our wallets wide open and bought two if not three of the same figure that night. Not many of us did this for Episode 2, but by then we had learned our lesson. Admit it though; the spring of 1999 was a grand time. Star Wars was coming back. There were happy meals, new novels; another incredible score by John Williams, and above all, the hype was better than any drug (legal or not). With all its warts Episode 1 did have some bright spots and produced some great toys. Here are our of "8 Great Star Wars: The Phantom Menace Toys".

See our "8 Not So Great Phantom Menace Toys" HERE.

This one was tough to equip with a pilot. Before the movie Anakin and Ric Olie were both fighting for the pilot seat. Afterwards it became a sweet ride for Obi-Wan (despite, never having flown it in the movie). Whoever you got to fly it, you can’t deny how cool this fighter was. When the Episode 1 toys went on sale, two or three of these ships quickly found their way into our closets.

The single packaged Darth Maul figure was incredibly bad assed. This one however came with the cloak, his bike, and was a hell of lot more poseable. After seeing the movie (and all of Ray Park’s moves) we had to have a Darth Maul that could do it all. It was this one.

Mail away figures had become fashionable again thanks to Hasbro. While waiting for the Episode 1 toys to arrive Hasbro gave us two sneak peek figures. This figure of Samuel L. Jackson quickly found its way into fanboys’ mailboxes and their hearts.

No, he was not a Conehead. He was in fact Cerean and the star of Dark Horse’s Star Wars prequel comic (Prelude to Rebellion). His figure (though his lightsaber color was later proven to be incorrect) was the first unfamiliar “alien” good guy Jedi in the first wave. To have a character with a comic backstory, who appears only on screen for a few lines and wields a lightsaber was the perfect combination to get the imagination spinning. Ki-Adi-Mundi rightfully deserves a place on our list

Taco Bell, KFC, and Pizza Hut had a huge assortment of “Happy Meal” toys for Episode 1. Several where incredibly lame while a few like this one had that sweet retro charm. Yoda as a magic eight ball, complete with his sayings, is a win.

Who doesn’t love big toys? Big beasts of burden are practically a Star Wars staple and this FAO Schwarz exclusive was no exception. The Fambaa beast came with the real feel skin and a Gungan Warrior, too. No battle for Naboo is complete with out at least two or three of these giant lizards.

There was an earlier 12-inch Darth Maul, but he was kind of frumpy. This one not only had the demonic snarl, but came with lightsaber swinging action and sound effects. This is the Darth Maul to have, well next to a Sideshow Collectible one.

This was, literally, the crown jewel of the Episode 1 toys. It came complete with an escape vehicle, sound effects, an Enemy Fighter Droid, and its own R2 Unit. It was the Millennium Falcon of Episode 1. It retailed for $100. However, it was easy to find for a lot less after Episode 1 failed to win over the fanboys. This is an essential piece to building your Episode 1 collection.