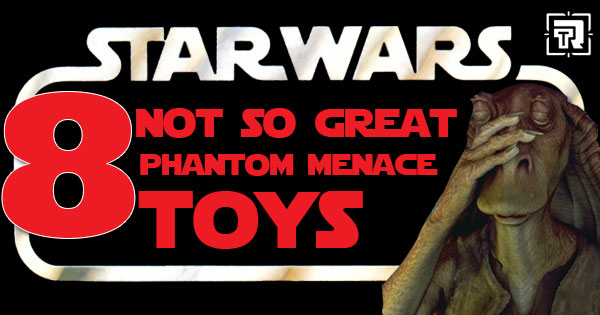 8 Not So Great Star Wars: The Phantom Menace Toys

May 19th is anniversary release of Star Wars: The Phantom Menace, aka Episode One. Prior to the film being released, there was behemoth of toys and products that landed in toy stores and toy aisles (then littered the shelves for years). Today we are looking back at the terrible Episode One toys that were released for the film. Here are 8 of my favorite “Not So Great Phantom Menace Toys”.

‍We understand that America is the land of capitalism, but as action figure aficionados it was down right crappy of Hasbro to do this. Apparently overseas Episode 1 figures came packaged with a droid. The very same droids we had to buy separately. It would have been nice to have a Battle Droid Army purchased right along with my regular figures.

‍All right, when the hell did this happen in the movie? Perhaps this was a cut scene or a story board that someone saw and thought it would make a great toy. Well, they were wrong. Star Wars has a great assortment of beast figures and this one is just plain horrible.

Initially Boss Nass is a bit of a heel. You have to admit he did set up the Jedi to get eaten. Why Hasbro green lighted a 12 inch version of this do-nothing character is beyond us.

We all wanted to reenact the Jabba spitting scene. We did, we really, really did. Oh and we also wanted that two headed announcer fellow. We did. We wanted him so bad that we had to buy Spitting Jabba to get him. This two pack is such a win win.

They are called Battle Bags yet where was the battle for the swamp creatures and the fish? The swamp creatures had a stampede and the fish swam by the Bongo (“which is a transport, I think”). These packs were incredibly lame and hung on the shelf long after the movie was out of the theater.

Sebulba did have the best pod racer, a cool figure, and an awesome cinema scene. Yet, I have to wonder why they thought Star Wars Koosh Balls would be a good idea? I don’t even think kids wanted this.

Toy Companies are always trying to make things more hip and more interactive for kids today. The CommTech Reader does this. It also eliminates imagination and keeps kids from creating their own stories. In all honesty, it was cooler to have a stand for the figures than to have them actually talk. Hasbro has brought back variations of this for Solo: A Star Wars Story and Star Wars: The Last Jedi.

No, not his action figure, or his Happy Meal Toy, or even his 12 inch doll can compare to this. Just look at that picture. Look at it!