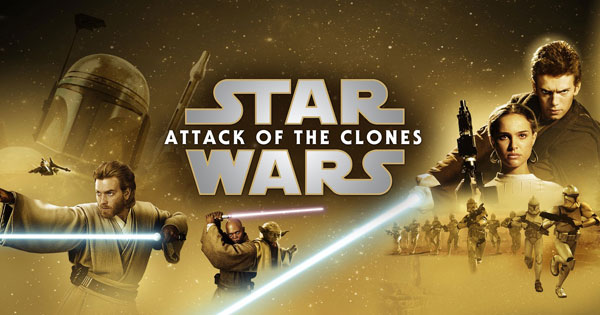 8 THINGS WE LOVE ABOUT STAR WARS: ATTACK OF THE CLONES

May 16th is the anniversary release date for the Star Wars prequel known as Episode II. Instead of compiling a list of dislikes or sore thumbs, we decided to bring you an array of things we love about George Lucas’ second prequel in the Star Wars saga. Here are "8 Things We Love About Star Wars: Attack of the Clones".

Obi-Wan Kenobi vs. Jango Fett
Not only do we finally have a proper fight between a Jedi and a Bounty Hunter, but we have it take place in a rainstorm on a water planet. There is a lot to this scene, as we are sure you know. Why we love it is that it further highlights the prowess of both combatants.

John Williams' Score
The Maestro was in rare form in this era, coming off both Steven Spielberg’s A.I. Artificial Intelligence and Chris Columbus’ Harry Potter and the Sorcerer's Stone. However, in Episode II, Williams found a way to create a new epic love theme and still give us all the great movie cues that we love in a Star Wars film.

Star Wars: Bounty Hunter
Released in the fall of 2002, for multiple systems, the LucasArts’ game, "Star Wars: Bounty Hunter", was incredible. It featured, the now dead Jango Fett in a story which took place before the events of Attack of the Clones. This game sprawled numerous worlds, had you collect bounties, live out a good story, and was just plain fun.

Star Wars: Battlefront (2004)
With events and gameplay taking place in both the prequels and the original trilogy, this game unleashed the soldier in all of us. It also satisfied the need to actually see the Clone Wars and participate in them. Attack of the Clones may have ended with a grand battle on Geonosis but in "Battlefront" we got to pick which side we were on. This game also ushered in a whole new Star Wars franchise which continues to this day.

Count Dooku vs. Obi-Wan Kenobi, Anakin Skywalker, & Yoda
It does not top the Qui-Gon Jinn, Obi-Wan Kenobi, and Darth Maul duel of Episode I. Yet it does reveal a lot about all the characters involved. Let us also be honest, who didn’t cheer when Yoda walked into the room?

Star Wars: Clone Wars (Macro Series)
Again, we look to the expanded universe that directly pulled from Attack of the Clones. George Lucas releasing a micro animated series by Genndy Tartakovsky was a brilliant stroke of both marketing and storytelling. This series, which debuted in installments on the Cartoon Network, filled in the three-year gap Attack of the Clones and Revenge of the Sith, all the while supplying character development and additional missteps by Anakin Skywalker. Thus making his journey towards the Dark Side complete.

Anakin Skywalker’s Fall
It is hard to blame Anakin for the slaughtering of the Tusken Raiders that killed his mother. However, it marked a turning point from which he could not return. He was supposed to be better than this, however, emotion often shapes our future. Did you know that in Marvel’s current “Darth Vader” comic, Vader returns to Tatooine and continues this practice?

Star Wars: The Clone Wars - TV Series (Complete) and Film
Attack of the Clones also supplied us with 7 years and one theatrical film of Star Wars: The Clone Wars. The TV series supplied an ample backstory to our cast of characters that was glossed over in years between Episode II and Episode III. It also established new characters such as fan favorite Ahsoka Tano. Furthermore, it illustrated that an animated weekly series for Star Wars had an audience.