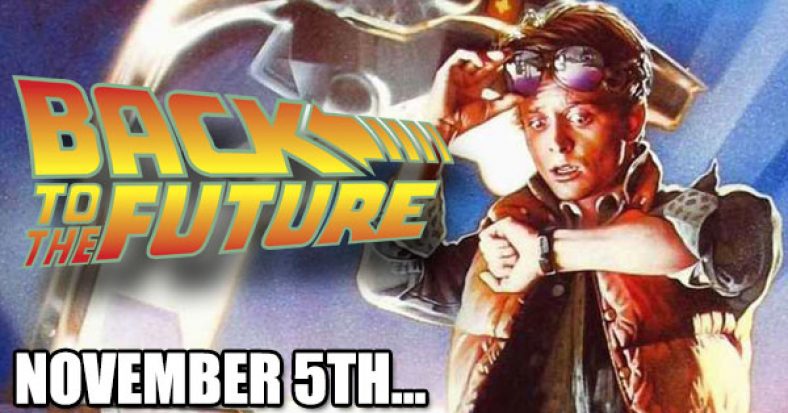 While I was living in Los Angeles, where they make movies, I thought it would be fun to travel around the neighborhood and visit some famous locations. The Griffith Observatory alone could fill volumes of famous movies that have been filmed there. I went after a few locations for a movie that is very near and dear to my heart. I went in search of Back to the Future locations. This couldn’t be too hard since I lived in Los Angeles and the majority of the movie was filmed close by in Pasadena. My goal was to do as many as I could in a single afternoon all in hopes to go Back to the Future.

Address: 9303 Roslyndale Avenue, Los Angeles, CA
The Eighties McFly ‘Lyon Estates’ home is beneath the power pylons of Arleta in the San Fernando Valley. It is a quiet town right off the 134 expressway. To look up and down the very same street Doc’s DeLorean traveled on gave me immediate chills. This was the road they took to where they didn’t need roads.

The Burger King (near Doc’s garage)

Address: Burger King, 535 North Victory Boulevard, Burbank, CA
Huey Lewis and the News started jamming “The Power of Love” and Marty took off on his skateboard right in front of this Burger King. I walked in to see if there was any poster or plaque. Sadly, there was nothing. But damn if that wasn’t the cleanest BK I had ever been in.

Address: 1177 Hillcrest Avenue, Oak Knoll, CA
1907 RR Blacker House, a Japanese-inspired design by Charles and Henry Greene. It was in an incredibly ritzy part of town. The only life that looked to inhabit that area were the gardeners working outside. If you are a big fan of the Father of the Bride, that film’s house was right around the corner.

Address: 4 Westmoreland Place in Pasadena, CA
1908 Gamble House at 4 Westmoreland Place in Pasadena. Doc’s house is on its own street right next to a children’s day school. This was by far the best location and was easily accessible (despite being closed the day I was there) too. I ran from the front door to the garage saying, “Then who's Vice President, Jerry Lewis? I suppose Jane Wyman is the First Lady? And Jack Benny is Secretary of the Treasury? Oh! I've had enough practical jokes for one evening. Good night, Future Boy!”. It was my true Geek moment for the day.

Address: Puente Hills Mall - 1600 Azusa Avenue, City of Industry, California, USA
If you don’t visit the mall, then it isn’t a true Back to the Future adventure. Malls rarely come and go so quickly so I knew this one was going to be easy. The JC Penny’s wasn’t there anymore and it wasn’t nighttime, but I think I found the right parking lot where the Libyans chased Marty. The coolest part was checking in via Facebook and someone already created the Twin Pines Mall location tag!

River Road Tunnel – Back to the Future 2

Address: 2800 East Observatory Avenue, Los Angeles, CA
Where Doc and Marty steal back the Almanac from Biff is in a tunnel you have to pass through if you visit the Griffith Observatory. Director Robert Zemeckis used this location first for the tunnel to Toon Town in Who Framed Roger Rabbit. You really shouldn’t walk it and it is not as well lit as it is in the movie.

Address: First United Methodist Church of Hollywood, 6817 Franklin Avenue, Los Angeles, CA
Yes, it was actually filmed in a church. The First United Methodist Church of Hollywood is up the street from Hollywood Blvd and a short walk to Grauman's Chinese Theater. I tried to get in to see the backside where the filming was done, but the attendant wanted $10 just to park my car for a few minutes.

Address: Universal Studios Back Lot Tour, Los Angeles, CA
No trip to the future would be complete without a trip to Hill Valley’s Town Square. It still stands on the Universal Back Lot Tour. However, if a TV series or film is using the location then it is off the tour sites for the moment. Keep your eyes open because there are a few other props here and there around the lot.

My road trip did have its disappointments. Hill Valley High School is completely fenced in and barely looked like it did in the film. I found the location to Lorraine’s House but the GPS couldn’t find it so that was off the trip. As for Biff’s Grandma’s House, well that must have been a set or part of the back lot because I couldn’t find anything on it but YouTube clips.

Back to the Future 3 – The Old West/ Train Station

Address: Monument Valley, Utah/ Arizona
I did my homework and found all that I could. In my research, I did learn that Robert Zemeckis did travel to Monument Valley to film many parts of Part 3. Thankfully, I already drove through that on my Road Trek across the country. I also learned that the train station used in Part 3 still stands. It is just a short 5-hour drive to Sierra Railroad, Jamestown, California (on Route 108, East of Stockton). The train station was also used for High Noon.

In Hollywood, California these are just places used for filming. They really don’t hold any stature unless they are a famous piece of architecture (like the two Doc Brown locations). Do these people know how special we, the Geeks of the world, find it? I can only hope so but highly doubt it.