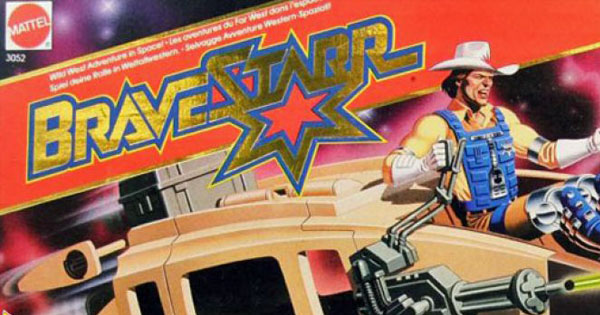 On the planet New Texas, in the 23rd century, a new Lawman has arrived to bring order to the lawless world. Meet Bravestarr kiddies and he was Mattel and producer Lou Scheimer's follow up to He-Man and She-Ra. Based on the producer and those other two properties it should be easy to guess what the plot of the cartoon episodes was like. The toys, by Mattel, were not on the He-Man scale but 8-inch and had some interactive parts (a la Laser Tag). Sadly, as the show failed to connect with kids the toy line died a swift death. AFJ celebrates the line with a quick jaunt down the YouTube Rabbit Hole. Fear not, we supplied you with a TV spot and trailer for the cartoon series too.

Bravestarr and Tex Hex
A quick showcase of the two main characters (the hero and villain). Care to guess which one was named which?

Bravestarr (UK TV Spot)
I don't remember a time when I played Bravestarr and it was this epic.

Skullwalker and Thirty-Thirty
So the bad guy gets to fly and the good guy gets to ride his partner? Wait... is that 90210's Brian Austin Green?

Bravestarr Neutra-Laser
Damn, I want 2 of these now. Again, is that Brian Austin Green?

BraveStarr: The Legend (1988) - Theatrical Trailer
This is a bit long but it will give you a general idea of the property.

1987 Cartoon Commercial
It wasn't that bad of a show, really!