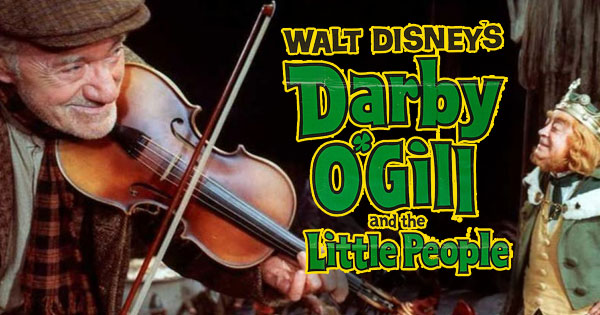 There is a great family tradition in my house to watch two movies on St. Patrick’s Day. The first is John Ford’s classic The Quiet Man (1952). John Wayne stars as Sean Thornton, a boxer who returns home to Ireland and falls in love with the sister of his biggest rival. A true classic if ever there was one. The other film, more in our realm, is Walt Disney’s Darby O’Gill and the Little People (1959).

For those unaffiliated with this classic, it tells the tale of Darby O’Gill (Albert Sharpe) and his battle of wits against Brian, King of the Leprechauns (Jimmy O'Dea). Darby, a widower, looks after his young daughter but knows that he won’t be around forever and hopes to find his daughter, Katie (Janet Munro), a husband. Enter Sean Connery, yes that Sean Connery. Walt Disney cast a pre-James Bond Connery in the heroic role of Michael McBride. This role is the one that launched his career after James Bond producer Albert R. Broccoli saw this very film. So Darby, with the reluctant help of King Brian, arranges for the two to have plenty of romantic moments.
‍

Now just wait a minute, this isn’t just some magical love story concocted by Walt Disney. Yes, there is a love story but at the same time, it is one of the great technological achievements of its day and completely horrifying as well. Fifty years ago there were no blue screens and CGI like there is today. Disney seamlessly used matte paintings and forced perspective to create the illusion that Sharpe was several feet taller than O’Dea and standing right next to him. To watch this now one can only be in complete awe as it still remains a wonder to behold. Disney’s mastery of this technique and its influence can clearly be felt in such modern films as all three Lord of the Rings.

The other unique thing about this Disney film is that it is a ghost story as well as a love story. When Darby refuses to listen to King Brian’s warnings about holding him for so long his lieutenants put “the come hither” on Darby. Darby already has himself protected with his first wish so the vengeful Leprechauns send out the Banshee to collect Darby’s daughter.

The Banshee with her wail rivals Cruella De Vil and Maleficent as one of the best visually horrifying Disney characters of all time. Throw in the Cóiste Bodhar (the death coach) and never before has the end of a Disney film looked darker. Well, not up until The Black Hole (1979) anyway.

It all ends with a wink and smile, rest assured, but no other Disney film runs the gauntlet of emotions and has something for everyone. It just doesn’t end there. Walt Disney in his infinite wisdom filmed a fake documentary about making Darby O’Gill and the Little People for his “Wonderful World of Disney” television show. It features Walt Disney himself and “Darby” visiting “King Brian” and asking for his permission to make a film about the Leprechauns. Disney the master craftsman was never better in selling the audience that he did indeed go to Ireland as well as film the movie there. In actuality, the production never left California. All his wizardry is later revealed on more recent retrospectives about the film but it is Disney’s “I Captured the King of the Little People” that sticks with you long after the film is over.

I doubt too many people get out their old dusty VHS tapes or break out The Leprechaun saga starring Warwick Davis on this holiday. Darby O’Gill is extremely easy to come by and totally worth the trip to the ruins of Knocknasheega. Trust me if you have never seen it, it is in every sense of the word a classic.

Take Note: Currently, the Disney+ version is the re-release edition. After a poor box office return Disney went back and softened the accents fo the Irish players. All so that they were "easier" to understand. Hopefully, Disney+ will correct this version to match the DVD and what originally aired on the Disney Channel.