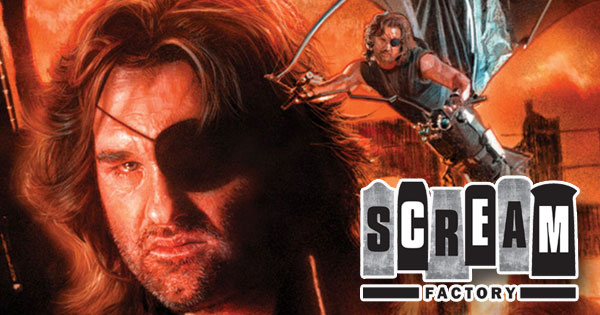 I remember it like it was yesterday: the summer of 1996. It was the summer of Roland Emmerich’s Independence Day and Peter Jackson’s The Frighteners, a mixed bag of movies, that do not have the same impression on you today as they did back then. Who knew that Peter Jackson would take his fledging WETA company and produce the Lord of the Rings on the back of The Frighteners, or that it would take Emmerich 20 years to produce a sequel to ID4 and then have it flop? This brings us to the end of the summer’s Escape from L.A. John Carpenter, Debra Hill, and Kurt Russell re-team to deliver a sequel to the 1981 cult classic, Escape From New York. The film thudded hard with general audiences, but the die-hards have kept it alive and it has since become a cult classic. Much to the die-hards’ joy, Scream Factory has released a Collector’s Edition of the film, which brings us to our review.

As I mentioned, I remember it like it was yesterday. My friends, and Mom (of all people) rented the original on VHS and sat down and reacquainted ourselves with Snake Plissken (Russell). It was a wise move since some of us hadn’t seen the film in years and at least one of us had never seen it (it was not my Mom). Also, watching the original again, just mere hours before an 8 PM show, highlighted how much in step the sequel was. This is a key factor in delivering what fans want, whereas the caveat is that they also want something new.

In Escape from L.A. we find Snake Plissken is once again taken captive and moments before being thrown into another maximum-security prison, he is offered a deal by the US government. He must find the President’s (Cliff Robertson) daughter, Utopia (A.J. Langer), who has stolen a device that can put entire countries into a new stone age (with an electromagnetic pulse). Again, Snake has no choice and is injected with a killer flu. He has to get in, bring back the black box, and kill Utopia. His reward is living and a full pardon.

This time around, Carpenter takes Snake into a ruined Los Angeles that was decimated by an earthquake. It is there, as in first film, that we have a unique collection of characters that provide more of a backdrop than actual set backdrops. In the first film, Carpenter had the charred remains of a burnt-out section of St. Louis to film his vision of New York City. He used several real locations but matte paintings help provide the real illusion perfectly (see Scream Factory’s Collector’s Edition of the original film for more details). In this film, it greatly suffers from 1996 low budget digital effects that have not aged well, a slight hurdle for non-fans or new fans that are accustomed to better graphics. Why you will be completely forgiving on that matter is because Carpenter brought together the likes of Steve Buscemi (Reservoir Dogs), Bruce Campbell (Evil Dead), Peter Fonda (Easy Rider), and Pam Grier (Jackie Brown) to deliver a modern Grind House Film before Quentin Tarantino and Robert Rodriguez made it fashionable again. It is these characters that help make Snake Plissken the quintessential anti-hero you are there to cheer for. They also provide enough gusto in their short scenes that you will be talking about them after the picture is over.

Escape From LA. still has that same impression on me today as it did then. It’s a fun movie with a solid cast of fun extras. Today, I have a great appreciation of all those involved, particularly Peter Fonda and Pam Grier. As for the film itself, it does have a few eye-rolling moments that the original did not. The surf scene (though fitting for the Fonda’s character), and Pipeline iare a but much as Snake rides a wave and then leaps onto a moving car. However the ending is perfect and a bit of a let down.  Due to a poor box office return, a third Escape film never happened. The picture quality is great, the new interviews with Stacey Keach and Bruce Campbell are fun, and the second time around with Russell as Snake is worth the ride.