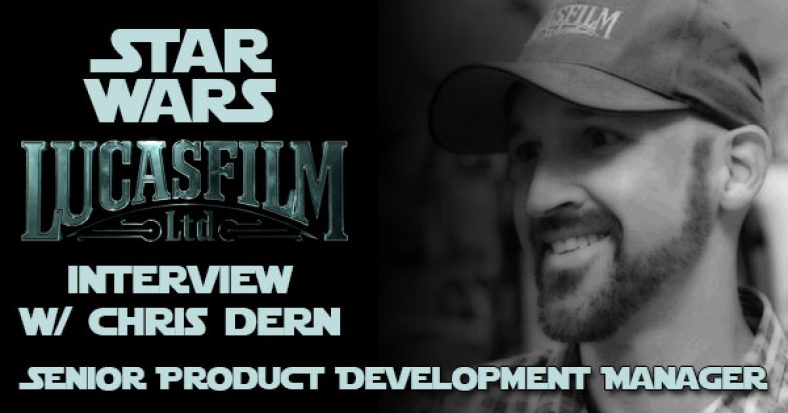 Our own Bob Trate went to Lucasfilm for the Triple Force Friday press event. While there, Bob had the chance to speak with Chris Dern, the Lucasfilm - Senior Product Development Manager. Chris has been with Lucasfilm since 2014. Before that, Chris worked for Hasbro as the Director of Product design (2006 to 2014). So, in short, Chris has helped to craft a lot of toys and action figures for Star Wars.

NOTE: This interview is a repost from our old site and originally shared on October 3rd, 2019.

Instead of asking Chris questions that he would probably not answer or have to dodge (about yet to be released figures). Which is standard practice for Hasbro and Lucasfilm employees. We thought it was better to ask Chris about his Star Wars fandom and what action figures he likes from the Lucasfilm brand.

Bob: (laughing from Chris’s answer) All right. Who is your all-time favorite Kenner Star Wars figure?

Chris: Bespin Luke. It was the first time the lightsaber was detached. You got two accessories in the package. That was my favorite.

Bob: Who was your favorite Hasbro figure?

Chris: Does it have to be Star Wars?

Chris: My favorite line was the Indiana Jones line, Temple of Doom wave that never came out or it was really hard to find. That was my favorite. That is when we hit it with all strides. It looked fantastic. The Indy character looked fantastic, plus, he came with the machete, he had the ripped shirt. That, that was one of my favorites. As for Star Wars, it is always tough because there are so many. I’ve always loved Bespin Luke.

Bob: I just missed a Willie Scott, two weeks ago at a convention. Someone just bought her.

Chris: That dress, when we were doing research, was gorgeous, that red satin dress. It was so tight but gorgeous.

Bob: Do you prefer: Ewoks: The Battle for Endor or Caravan of Courage: An Ewok Adventure?

Bob: Is Steve Evans (Hasbro’s Creative Director of Consumer Products) really British or is it all a clever plot developed by the Empire to make him more charming?

Chris: He is so British. We love to tease our Steve.

Bob: Do you have to go out toy hunting or do they send them to your office?

Chris: I haven’t toy hunted in a long time because of the industry I work in and I miss it, quite frankly.

Chris: That was kind of fun, back in the day. That was Power of Force by the way.

Bob: That was fun.

Bob: How many Jabba’s Sail Barges do you have?

Bob: Do you know who Constable Zuvio is?

Chris: (smiles) Yes. I think I do. I think I have a few of those in my office (laughs).

Bob: Oh, that’s easy. Jedi Luke Skywalker from Return of the Jedi. He had that cloth robe, the green lightsaber, and that odd gun which he only held for a minute. When you took the robe off it was Luke from the end of the movie. It was like getting two figures.