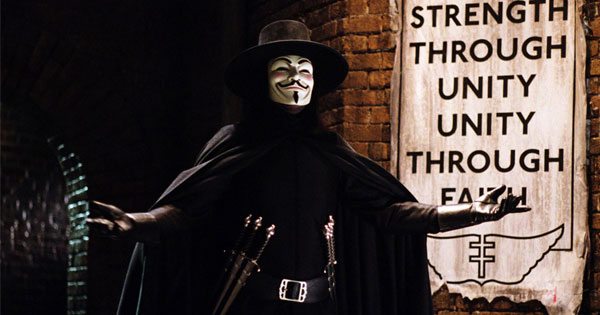 On this the 5th of November, AFJ would like to take the opportunity to remember one the great films of the new century. Let us always remember the 5th of November and V. To celebrate this day, enjoy AFJ’s "Five Vivacious Moments from V for Vendetta".

V makes his first appearance in the opening of the film just as the vulgar Fingermen are closing in on a frightened Evey. With a stunning combination of both thrashing violence and classic poise, V vanquishes these insignificant villains and thrashes his way into our senses, demanding the interest of both Evey and the audience.

#2 The Destruction of Old Bailey

On the rooftops of London, just at the dawn of November the 5th, V gives Evey a front row seat to a vivid and masterful display of both valor and horror as the old Bailey is lit up to the tune of the 1812 overture.

The horrors occurring at Larkhill relocation site are documented n the journal of Dr. Delia Surridge, as she is haunted by the visage of a prisoner/subject who escaped the facility in a terrible fire. He becomes the vengeful face of all the people she helped to kill.

Facing his own death, V delivers himself to Creedy deep in the London underground and unleashes a  victoriously gratifying massacre after having already been pumped full of enemy bullets.

With the Sutler dead, V uses his dying breath to give Evey the control and decision to follow through on his promise to destroy the House of Parliament. In the last scene of the film, the building magnificently blows and lights up thousands of Guy Fawkes faces who are finally united in hope.