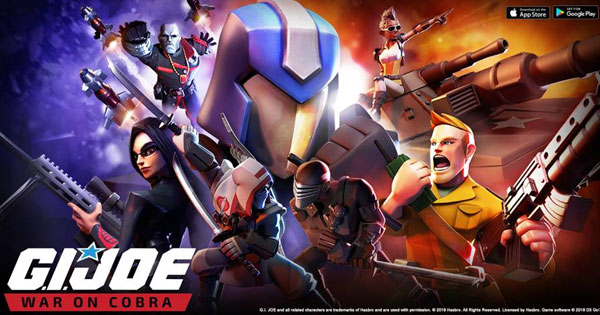 From time to time we will cover video games or mobile device games here on Total Toy Recon. The big deal, for us, about the G.I. Joe: War on Cobra is that Hasbro has just announced the the first new G.I. Joe product in years. Could this be an indication that action figure for the property will be revealed at Toy Fair 2020? We shall see, YO JOE!

Press Release: Jan. 7, 2020 -- G.I. Joe is here! D3 Go! and Emerald City Games along with Hasbro, Inc. announced today that G.I. Joe: War on Cobra is coming soon to mobile devices. Launching worldwide on the App Store, Google Play, and Amazon Appstore on January 20, 2020, G.I. Joe: War on Cobra is full of epic new missions and features a wealth of fan favorite heroes, villains, and vehicles from the 1980s animated TV series and iconic action figure line. Choose your side, build your team, and engage in strategic battles with other players by land, sea, and air!

“For us, G.I. Joe is more than just a brand. It’s a shared piece of cultural history that’s near and dear to fans worldwide,” said Brian Etheridge, Vice President of Publishing at D3 Go! “With a proven track record in the mobile space and a passionate team of creatives, we’ve found the right partners with developer Emerald City Games to bring the fun and excitement of the world of G.I. Joe to mobile devices with this game.”

“G.I. Joe has a long, rich history and countless fans around the world,” stated Richard Cleveland, Vice President of Digital Gaming at Hasbro. “We look forward to launching a new way for current and new fans to enjoy the brand, and know that this game brings the brand to life in a new and exciting way!”

In G.I. Joe: War on Cobra, choose a side and fight! The War on Cobra wages on, but where does your allegiance lie? Fight for freedom and save the world from total chaos by joining the Joes. Or show your might in your quest for world domination by joining the forces of Cobra. The fate of the world is at stake. Will you be its savior or conqueror?

G.I. Joe: War on Cobra includes many of your favorite heroes, villains, and vehicles. Here’s just a small sample of the fan-favorites players can look forward to collecting to build their ultimate team at launch!

·       Compete with other players in PvP battles and work your way up the ranks!

·       Equip your Squad and defend your base from land, sea, or air assaults with special defenses, including Turrets, Sea Mines, and Troop Depots.

·       Choose a side! Both G.I. Joe and Cobra factions have unique Units and Buildings with different playstyles for a truly substantial experience.

Knowing is half the battle! Visit the game website for game information and stay up to date on the latest news for the game by visiting the official website at www.gijoewaroncobra.com  and signing up for the official email newsletter. Join the community on Facebook, Twitter, Instagram, and YouTube. Now you know!

D3 Go! is a leading worldwide publisher and developer of original and licensed interactive entertainment video games based in Encino, CA.  D3 Go! is dedicated to creating the best player experience and support on all major gaming platforms and mobile devices.  D3 Go! is a subsidiary of D3Publisher Inc. and is ultimately owned by BANDAI NAMCO Holdings Inc.  For more information, please visit https://d3go.com.

About Emerald City Games
Located in Burnaby, British Columbia and founded in 2008, Emerald City Games has assembled a team of the industry’s most talented developers. They have consistently pushed the boundaries in gameplay and art to create successful, award-winning games such as Sacred Seasons 1 and 2, Lionheart Tactics and Lionheart Dark Moon. With their latest endeavor, G.I. Joe: War on Cobra, the studio aims to push things even further in their quest to create the next Top 10 game for mobile.

Hasbro (NASDAQ: HAS) is a global play and entertainment company committed to Creating the World's Best Play and Entertainment Experiences. From toys and games to television, movies, digital gaming and consumer products, Hasbro offers a variety of ways for audiences to experience its iconic brands, including NERF, MY LITTLE PONY, TRANSFORMERS, PLAY-DOH, MONOPOLY, BABY ALIVE, MAGIC: THE GATHERING and POWER RANGERS, as well as premier partner brands. Through its entertainment labels, Allspark Pictures and Allspark Animation, the Company is building its brands globally through great storytelling and content on all screens. Hasbro is committed to making the world a better place for children and their families through corporate social responsibility and philanthropy. Hasbro ranked No. 13 on the 2019 100 Best Corporate Citizens list by CR Magazine and has been named one of the World’s Most Ethical Companies® by Ethisphere Institute for the past eight years. Learn more at www.hasbro.com, and follow us on Twitter (@Hasbro) and Instagram (@Hasbro).