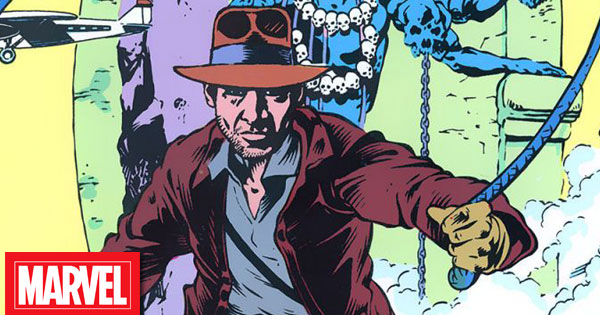 It seems hard to imagine that I once sat in a non-crowded theater in anticipation of the second Indiana Jones film. I say it wasn’t crowded because my parents took me to a matinee and the film was already riddled with controversy. Kudos to my Mom and Dad for putting trust in the men who delivered to the world E.T. the Extraterrestrial, 3 Star Wars movies, and, of course, Raiders of the Lost Ark. I didn’t catch the time difference at the beginning (Temple of Doom is actually a prequel), nor did I see that Indy was actually in Club Obi-Wan. I did, however, realize the opening was an homage to James Bond, that the blonde woman screamed way too much, and there was a serious lack of Nazis in the film. I could go on and on and about Temple of Doom and its other profound effects on me, my friends, and even my career. This isn’t about that. I wanted to tackle something a little different for the film's birthday (May 23rd), the original Marvel Comic.

Seminal events such as the observations of film’s anniversaries and release dates are customary when you love pop culture. It dates a time and place where our lives changed. Times were different, then. There wasn’t a 3 to 4-month turnaround for films to arrive on VHS, nor were they cheap when they did arrive for Home Entertainment. My first copy of Temple of Doom, not taped off of cable, actually came from McDonald’s when Last Crusade arrived in theaters. Until that film hit cable or the local video store, our best way to experience Temple of Doom over again was the comic.

Marvel and Lucasfilm Ltd. had a long history of co-producing comic book adaptations of their properties. In fact, many believe that it was the original Star Wars Marvel Comic that kept the company afloat during some troubled times. Flash forward to now, and it is Marvel’s parent company, Walt Disney, that owns Lucasfilm, too. I thought it was only fitting, on this anniversary, to go back and read the original Temple of Doom limited edition comic to experience what the Indy fans of the day had to contend with. I say contend because I know, in a long history of reading movie adaptation comic books, that they are never faithful. What the artist chooses to draw and what is adapted by the writer are not the same choices that the director or the actors make on set. I know Temple of Doom better than I know my family’s cell phone numbers. If anything, this was going to be a different kind of adventure.

The original three-issue limited series cost you all of a $2.25. That’s right, it was 75 cents an issue to read Indy’s latest adventure. The adaptation was written by David Michelinie (see work) and the penciler was Jackson Guice (see work). It was published from September to November 1984. I found it strange that they waited to so long to release the comic. The irony is that much time between the film’s release and the comic’s, it would have coincided with the home entertainment release. Were they worried about spoilers? Why not just release it in May for a tease and July to finish it off? It was a different time. There was just a film to worry about and not the media marketing machine that we have today. That alone reminded that this was a simpler time and I should kick back for some fun.

Immediately there are differences in reading the Temple of Doom comic. The first being we learn the cost of insulting Indy. In the film, Lao Che’s son is shown to have a bandaged hand for his attempt at trying to steal Nurhachi from Indy. In the comic, we learn that Indy actually cut off one of his fingers. A pretty gruesome detailed revealed, but this story is riddled with them. Yet in the comic, there is no ripping out of the heart and several other characters meet different ends. I found the difference in violence odd as the film was rated PG (not PG-13, do your homework) and showed a lot of crazy things. The comic cut out the big iconic moments that we associate with Temple of Doom. It would have been one thing to save them for the film in an early release of the comic, but the film had been out for months.

As I read on, I started to realize that many of the best moments that make Temple of Doom were gone. The bug scene and Willie’s encounter with them are gone. Outside of chilled monkey brains, all the food gags are absent here as well. At one point, we even have Indy instructing Willie on how to handle the snake that is wrapping around her. The “I hate that Elephant” scene is very different in the comic.

Now for those Willie haters reading, she is subdued here. We do learn how she got to Shanghai, but she is pretty much just the damsel in distress for three issues. The two major character changes in the comic are Short Round and Mola Ram. I know that Short Round is not a universally liked fan favorite. However, he is Indy’s salvation in the film. Without that personal stake and someone who believed in him, the world would be run by the Thugee. In the comic many of his best lines are gone or given to Indy. It’s almost as if he is there to burn Indy, wake him up, and then go back to the shadows. By the end, he is reduced to simple one-liners.

Mola Ram also has his character cut from him. It does say something about the presence Amrish Puri brought to the role. He was terrifying and brought a true evil to the screen. I believe this fault falls on penciler Jackson Guice. Never once does Guice give the character a panel to have him stand out. The terror of Mola Ram is non-existent and his character is about as menacing as the numerous guards Indy encounters.

It’s fun to venture back and see how much comics, movies, even marketing have changed. On occasion, we do have comic adaptations of movies. Today though, even Marvel and DC know how quickly those books end up in the bargain bin. Prequel comics or preludes are now the motifs for comics and their movie counterparts. I would have loved to read three individual prelude stories for Indiana Jones and the Temple of Doom.  To start with a story on how Indy, Short Round, and Wu Han met each other would have been great, followed by how Indy got the remains of Nurhachi. The third and last story would have been why the Sultan of Madagascar was going to cut off Indy’s “head”. None of these would have spoiled the film. This limited edition comic wasn’t even the Cliff Notes of the movie or the G-Rated cut. A shame really because it was a wasted opportunity for some great storytelling.