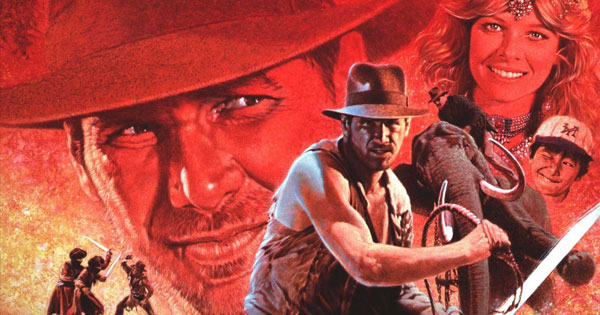 "If adventure has a name... it must be Indiana Jones." In 1984 Doctor Jones' action-packed globe-trotting would once again break box office records and make a generation of little Han Solos switch out their blasters for a bullwhip. At least for a little while. Much like the mine cars our heroes use to escape the hidden temple, the legacy of the film is filled with roller coaster-like ups and downs. A controversial tone for the time gave way to contrived outrage and the inevitable comparison to its predecessor.....but is it a balanced view? Ultimately, over-thinking Saturday Matinee escapism (even if it is full price, a-list escapism) can be a futile endeavor. As a dyed in the wool fan, I swim in the pop culture water teeming with negativity and criticism. If you believe in something you can defend it and, like it or not, time has shown Indiana Jones and the Temple of Doom will not be dismissed.

"Indiana Jones goes to Hell" is one way George Lucas and Steven Spielberg describe their idea for the second installment in the series, a feeling most would agree was achieved. If you take a look at some of the posters for the film, you'll notice something unusual in the form of a box at the very bottom. It reads, "This film may be too intense for younger children". This "intensity" gives Temple the distinction of bringing the PG-13 rating into existence. Released on May 23rd, 1984 under a PG rating the MPAA was in a quandary about how to deal with a film which was insanely dark and violent for a PG rating, but undeserving of an R. Gremlins, produced by Steven Spielberg and released the very next month, posed the same problem. With everyone in Hollywood, who saw the film in advance, screaming for an R rating, Spielberg decided to work with the Motion Picture Association of America rather than fight the system. A smart move if you've ever seen the documentary This Film is Not Yet Rated (2006) in which the MPAA is shown to almost hold a film hostage from wide release if producers don't go through the "non-mandatory" system they have set up. Spielberg suggested the new rating to Jack Valenti, head of the MPAA, and in August of the same year, Red Dawn would be released as the first PG-13 film. It seems upon the release of Temple the sky never fell. There were no incidents of children ripping each other's hearts out. The film would go on to become one of the top ten grossing films of all time, a list it would stay on for many years to come.

Under the Black Sleep of Kali

‍Set in 1935, Temple of Doom is a prequel, not a sequel, to Raiders of the Lost Ark, which is set one year later. The change in tone from Raiders is one good reason to set it earlier in history, but it also freed the creative team to set Indy's adventures in whatever period they wished - much like Jones hopping from one part of the globe to another. George Lucas spoke of creating this chapter, “I was going through a divorce and I was in a really bad mood. So I really wanted to do dark. And Steve then broke up with his girlfriend, and so he was sort of into it, too. That’s where we were at that point in time.” Breakups usually equal art of any kind getting weird in a good way. One must give credit to George and Steven for trying something a little edgier than the projects they were known for at the time. As dark as it may be, the film is a true tightrope act between horrifying, heroic and downright funny. Nearly every sequence is peppered with an unexpected moment to let the light into this subterranean nightmare. That tone is usually where the conversation ends, but remarkably overlooked is how this chapter is the closest embodiment of the Saturday Matinee cliffhangers the entire series purports to emulate. The other movies pay homage to the adventure films of old with a modern sensibility, but TOD is as close to a recreation of those films as they get. Like a colorized film of yesteryear, it shares this distinction with only a few others like The Rocketeer (1991) and The Artist (2011), for example. It's all there to tell us this is a different ride, from the opening Busby Berkeley-like musical number to the spunky side-kick, to the damsel in distress, Willie Scott, who is the exact opposite of independent kick-ass, Marion Ravenwood. All Indy films have a light-hearted, wink-toward-the-crowd approach, but 'Temple' doesn't play like its brethren. Where 'Raiders' redefined non-stop action a few years before, TOD daringly leaves even less room to catch our breath.

The two previous subjects of this article certainly influenced some critics to go outside of the normal parameters of film review. Criticizing the pace, tone, humor characters, and comparing it to Raiders is something I'll live with. Though Indiana Jones is my all time favorite film character, not all of his adventures are for everyone. To this point, criticism is simply a matter of taste. The atmosphere surrounding Temple, at the time, was a fine pre-internet example of what we see every day online, fake outrage. Literally reaching for reasons to constantly claim we are offended has been taken to almost an art form (no offense to art) and has developed into the modern equivalent of a mob calling for someone's head. A few critics of the day exclaimed racism when it came to their reviews of TOD. They claimed that Indy was, in this instance, "the great white hope" rescuing the poor helpless people of another ethnicity. Of course, the movie is full of inaccuracies regarding Indian culture and history. Most notably, the depiction of the Goddess Kali representing death and evil. While she is sometimes portrayed as violent and dark, she is also revered as the "redeemer of the universe" and the Goddess of Shakti, otherwise known as empowerment or energy. The dinner scene in Pankot palace is another notable gross (literal and figurative) inaccuracy of Indian culture's taste for the bizarre. However, there are other angles to keep in mind when looking at Temple of Doom.

First, we could try the shallow and desperate sounding point that is tantamount to "Some of my best friends are...(fill in ethnicity)." The filmmakers' personal lives hardly convey any notion that they are racist. It insults and belittles their work towards all creeds and cultures, not to mention their families both by marriage or through adoption. As I said, this is an argument you grasp at when attempting the impossible task of showing someone what is or isn't in your heart. So, let's try another approach.

Next is something obvious. If Hollywood made films for accuracy, Blockbuster Video stores would have had one shelf for documentaries, prompting them to go the way of the DoDo decades before they closed their doors forever. Temple presents things like the dinner scene and the deity the Thuggees worship as would an old travel adventure film presenting "a far off and exotic land". Indy lives in a world that is strange, perilous and where dangerous wonders lurk around every corner outside the confines of the professor's classroom. It is in this spirit that embellishments become expectable devices pushing the limits of suspending our disbelief. If you meet someone who says "I would never go to India, they eat eyeball soup.", they've done you the favor of cueing you to walk away immediately and not waste your time.

Finally, anyone who lends credence to racism in Indiana Jones movies doesn't understand the character any farther than the fact that he packs a punch and hates snakes. While Indy, as a scientist, never takes superstition at face value, he deeply respects the people of other cultures he comes in contact with and studies, a lesson he learned from traveling with his parents as a young boy as seen in The Young Indiana Jones Chronicles. He has friends from every corner of the world ready to lay down their lives for him and vise versa. When Willie refuses to eat the food the Indian villagers have presented, Jones whispers "That's more food than these people eat in a week. They're starving. You're insulting them and embarrassing me. Eat it." He isn't simply telling her to avoid losing the village's help to get to Delhi, rather he is sincerely embarrassed to see such lack of respect.

Indy didn't study so many languages and customs just to have the connections to the black markets or the best guides in each country. It was instilled in him that to learn about the world is to enrich the experience of life. It's not a pseudo-Christian relic he finds enlightenment from this time around, but the Sankara Stones which are just the regular Macguffin threatening the world once again. The immediate stakes are much higher in Temple than in the other films. Children enslaved by the power-hungry Thuggee is the cause he cannot help but get involved with. Having procured the stones in the second act, Indy is free to return the stone to the village, tell villagers where their children are and ride off to Delhi with the other two stones safely in his satchel (NOT a purse). Instead, we recall him looking in the eye of the escaped slave child who gave Indy the Sanskrit manuscript and understand his look the moment he hears another child's scream while at the Kali alter. Henry Jones Junior couldn't ignore the injustice on his worst day. That is what elevates him from grave robber who is after his "fortune and glory" to a true hero.

Time, and let's face it, Kingdom of the Crystal Skulls has shown 'Temple of Doom' to be credible entertainment worthy of being a chapter in Indiana Jones' exploits. It has action, adventure, and a John Williams score, which is a jewel in the most wonderful hot streak we may ever witness in film music. If you love it, never let others tarnish that passion for it. The next time you hear someone say "Temple of Doom sucks", ask them if they mean it's the weakest in the trilogy (not a typo). However, as a film in general, you don't get action/adventure much more entertaining than this. It might not be THE best compared to Raiders and Last Crusade, but to millions of fans like myself, it's still like having the 3rd best meal you've ever had in your life. "I understand its power now."