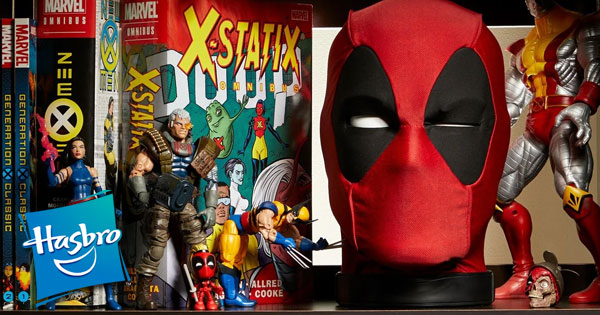 Hasbro has opened up preorders from its recently revealed Marvel Legends Interactive Electronic Deadpool's Head. A great office accessory, if ever there was one! Order your's HERE from Entertainment Earth with FREE SHIPPING!

From the jerks who brought you Marvel Legends, including that shiny, expensive glove, a bunch of helmets with glowing eyes (oooOoooOhhh!) and a ton of Build-A-Figure pieces that you’ll step on one day, comes the premium, interactive, app-enhanced, Deadpool's Head. Features over 600 lines of content that are absolutely not guaranteed to be funny, because is anything in life really guaranteed? But we tried. We really, really tried. A bunch of comic book writers, editors, stand-up comedians, and hacks from Hasbro worked as hard as they possibly could to make you laugh. So we hope you laugh. WE NEED THIS, OKAY? Ahem, anyway. It’s definitely a head that looks like Deadpool’s head, though, if Deadpool were a real person with a head.