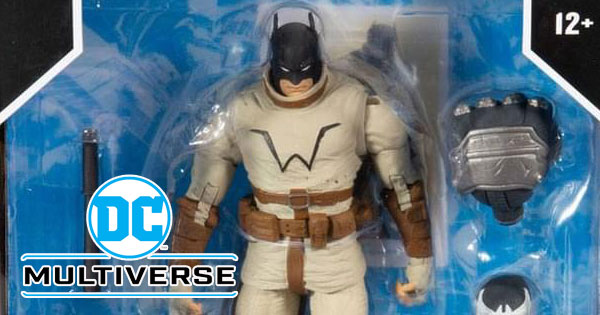 Let's start this off with I am a diehard DC fan. I collect all things DC from the Dc Direct line which is unfortunately now no longer. To Mattel's sometimes good by mostly disappointing waves of Dc figures. It was starting to look very bleak for us the few and the proud Dc collectors. However in our darkest hour a ray of light was shined upon our poor souls. McFarlane Toy Company acquired the license to release Dc figures for 2 years. At first we were all a little worried after being battered by the last few years worth of Mattel figures. However right out of the gate this line showed real promise and has been picking up steam ever since. That gets us to today. We had seen some teases from Todd Mcfarlane himself of this upcoming wave. But now after seeing the figures themselves Im all in on these ( I was already all in but this took it over the top). The great thing that Todd has done with this figures is to make figures from the newer Dc comic runs that have never had a figure made of them. This is a hot button issue for some who want classic characters. To them I say just relax take a breath because they will come. Any true Dc fan has 4 or 5 of each of the classic characters. So these new figures are breathing new air into these tired collector lungs. Eventually he will of produced all the new comic runs and go to the classics but for now sit back and enjoy the ride.

Twenty years in the future, Bruce Wayne wakes up in Arkham Asylum. Young. Sane. And...he's never been Batman. To piece together the mystery of his past, the Dark Knight embarks on a sprawling quest through this unknown world, meeting futuristic versions of former friends and enemies, including a grisly traveling companion--the Joker's head. Somehow still alive, Joker's decapitated head becomes Batman's ghoulish guide through the landscape of the devastated DC Universe. But to unravel the cause of this terrible future, he'll need to track down the unspeakable force that destroyed the world he once knew. This could be the last Batman story ever told... Collects Batman: Last Knight on Earth #1-3

Special Thanks to The Voice of Reason He is the man when it comes to these early release photos and more give him a follow.His facebook link and instagram handle are below. Also a link to his amazing artwork on Teepublic.

Know lets get to the figures:

The Last Knight On Earth Scarecrow