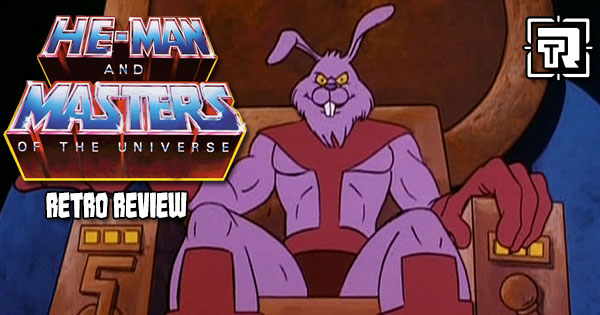 To celebrate the holiday of Easter, I thought I would take a shot at doing a retro review of a holiday-related TV show or movie. Let’s face it, no one should really sit through Night of the Lepus more than once, so I thought the unofficial Easter episode of He-Man and the Masters of the Universe would be a better choice.

Now, to get a few things out of the way first. The episode aired in October, not April. So the creative minds behind He-Man either wanted to avoid the holiday tie-in or this episode was completed and they needed to stay on schedule. Regardless, if you watch 10 minutes, you’ll think it's for Easter, especially since the villain is a giant purple bunny named Plundor. My other little hinge to reviewing this episode is a bit of a hangover from my youth. I liked He-Man and the Masters of the Universe, a lot. My brother and I had a ton of the toys (and still do, actually). One thing that never sat right with me then, and even more so now, is how easily things got wrapped up. I always wanted He-Man and his band of heroes to linger longer and ask better questions. In short, make more of a difference. They did have only 22 minutes to tell their story, but little things like that always bothered me. This brings us to episode 19, “The Quest for He-Man” and a snarky critic tackling a 37-year-old cartoon written for children by the great Paul Dini.

From the get-go, it seems like business as usual. Our band of heroes is enjoying a nice peaceful day in Eternia. Then, before they know it, Trap Jaw and Tri-Klops attack the palace. Much like Clark Kent saving the Daily Planet, Prince Adam changes into He-Man and confronts the two air bound raiders. It is not He-Man who takes down the first bad guy, but Ram-Man. This is amazing to me because Tri-Klops can see in every direction, so why didn’t he see Ram-Man’s attack? Sure Tri-Klops turned to gloat at He-Man, but he definitely should have seen Ram-Man coming.
‍

What amazes me is that Tri-Klops says loudly enough for everyone to hear, "Skeletor’s plan better work", after he is captured. So obviously, this doofus, who has never beaten He-Man, EVER, let himself be captured. Sure, Trap Jaw, on the other hand, actually puts Skeletor’s plan into motion and gets He-Man trapped into some new energy web. Skeletor then appears which prompts He-Man to spout, “Skeletor, I should have known”. To be honest, who else would it have been? Evil-Seed? Hordak? Sure it could have been one of those two other villains, but they hadn’t appeared yet in the series. Who else could it have been, He-Man? Another little question I have is, how did Skeletor and Evil-Lyn sneak onto the palace grounds without being detected? At this point, there are just 16 minutes left in the episode so we had better keep the story going. Skeletor casts a spell and not only erases He-Man’s memory but then transports him to the crossroads of alien worlds. In short, he has no idea where He-Man went but he is gone now. So our story is that He-Man is lost in space, somewhere, and has no memory of who he is.

Now before we get to the alien world, the purple bunny, and the quest for our hero, I have a couple of questions. First up, Skeletor can erase He-Man’s memory but he can't put the skin back on his face? Clearly, I am having fun with you here, but I still think it is a legitimate question. Then, after Skeletor’s plan has come to fruition, more of our heroes show up to take out Skeletor, Evil-Lyn, and Trap Jaw. Trap Jaw, with his laser arm, quickly takes aim at Teela, Man-At-Arms, and Stratos. However, Orko casts a quick spell and turns Trap Jaw’s laser blast into a “Bang!” flag (seen above). This was Orko’s intention, but I thought Orko’s powers worked in reverse in this dimension, which is why he is a great sorcerer on Trolla, but only a Court Jester on Eternia. Has Orko already figured out how to do the reverse of his intentions for his spells? After Skeletor and Evil-Lyn skedaddle, Trap Jaw is imprisoned. They lock up this obviously mentally and physically disabled man and offer him no help whatsoever. Seems very shallow of our heroes.

To track down He-Man; Orko, Man-At-Arms, Cringer, and Ram-Man ask the Sorceress for help. She calls upon this show's “Cosmic Watcher”, Zodac (in his first Filmation appearance). Then it hits me, Zodac (top right) is the Uatu (Marvel's Comic's Cosmic Watcher, top left) of the He-Man series. When he arrives it also hits me, that as cool as this guy is, his action figure had him with bird-like arms and duck-like feet, yet the animated version has none of that. We have to move on though, there are only 14 minutes remaining.
‍

We catch up with He-Man on the planet Trannis before the dynamic trio does. The world we see is a crazier one than Ralph Bakshi’s Wizards (1976), which says a lot considering the normal craziness of Eternia. He-Man, thankfully, falls in with a band of freedom fighters, because of their leader, Gleedal, who reminds him of the Sorceress. She tells them of their struggle to save their world and its creatures because Plundor’s factories are using up all the resources, spoiling the ground with his industrial waste, and causing the extinction of numerous species. Plundor takes a quick interest in He-Man, via his closed circuit TV, and figures that He-Man should be on his side. He sends his giant robotic floating bunny rabbits to retrieve He-Man.

It doesn't take long to see where the final minutes of this episode are going. A lesson about protecting the environment (which is nearly Dr. Seuss’ “The Lorax”) occurs. He-Man, who still does not have his full memory, vows to fight beside Gleedal and stop Plundor. With 5 minutes remaining, the dynamic trio finds one of Gleedal’s friends who takes them to He-Man. Just when things are at their most dire, Orko gets He-Man to recite his Grayskull oath. BAM! Thus, He-Man has his memory returned to him. Yet, shouldn't he have turned back into Prince Adam? Let's keep moving, shall we?

All in all, this is still a fun episode right down to He-Man trying to stop a rocket much like Captain America did in the comics. In doing so, He-Man returns Trannis back into the paradise it used to be. In the episode’s final moments we see Plundor working on the chain gang taking down one of his old factories. Things look okay, but what about all the industrial waste? Are the oodles of creatures that Gleedal informed us that went extinct, magically returned too? These questions aren’t ever addressed because He-Man and the dynamic trio head back to Eternia to settle their score with Skeletor. You know without Skeletor doing all he did, Trannis might have been completely decimated. Maybe for once Skeletor’s evil deed actually saved someone else’s day. Wrap your head around that and have a Happy Easter.

The full episode is posted below from the official He-Man YouTube page! The Plundor (the Evil Rabbit Seeking Riches) figure from MattyCollector is well sought after item.