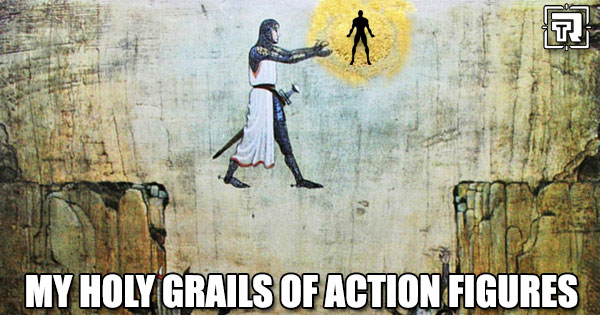 MY HOLY GRAILS OF ACTION FIGURES

They are out there… somewhere. The unobtainable action figure that we hold in such high regard they become “holy” to us. One figure that makes the whole collection complete. A Holy Grail, if you will. Now, there are several Holy Grail Action Figures out there in the world. The list below is for figures that were available to the public, in one way or the other. Obviously, a rocket firing Boba Fett would normally be on this list. However, outside of a few prototypes and one that was given to the original Boba Fett, Jeremy Bulloch, no one was ever given the chance to buy one. This list is for figures that were made available to the public. These are “Holy Grails of Action Figures”.

No, it’s not Yak Face, it’s the Blue Snaggletooth. One summer, at a toy show, I saw 30 Yak Faces in a case for sale. That alone blew him away as a hard to find figure. The Blue Snaggletooth is harder to find. Originally, he was available through the Sears Christmas catalog (1978-1979) in the Cantina Adventure Set. However, the Blue Snaggletooth was not available in every box, thus making him even rarer. He was also a mail-away exclusive with Sears and came with a Greedo figure as well. This two-pack (in mint condition) alone would be worth finding for any toy collector.

THE ALIEN - ALIEN - KENNER
There have been many since, but the original Alien figure from the 1979 film still reigns supreme. What makes this figure awesome is that the inner jaw has a trigger in the head which activates it. Kenner completely captured H.R. Giger’s design. It should also be noted that it was unheard of to have a rated R movie have any toy circa 1979.

GODZILLA - SHOGUN WARRIORS - MATTEL
The 2-foot-tall Godzilla is on my permanent must-have list. Godzilla’s coolness factor hits several points but the biggest was his fist firing hand. There are very few toys that are quintessential for collectors and Godzilla is one of them. Godzilla is not too tough to find. It’s finding one completely intact that makes him a Holy Grail for collectors.

BELLOQ - RAIDERS OF THE LOST ARK - KENNER
The Raiders of the Lost Ark toy line by Kenner could not compare to its Star Wars brother. However, most -if not all- of these figures are highly sought after despite how small the line was. The granddaddy of the set is a mail away Belloq. Here, Belloq is dressed in his ceremonial robes. Mail away figures are always rare and a complete mint condition one is even tougher to find.

THE SPIRIT OF GRAYSKULL - MOTU CLASSICS - MATTEL
At the San Diego Comic-Con in 2008, there was an exclusive that buried them all. The Spirit of Grayskull had only 2 figures ever made (I have read rumors there were actually 5). In actuality, he was just a King Grayskull created in clear blue plastic. One of these was raffled off to a lucky fan. The other went to a charity auction. This could make him one of the rarest figures ever released to the public. A “Spirit” figure was released later, with some changes, however, the original 2 (or 5) are well deserving of the title holy grail.

MICKEY MOUSE COBRA COMMANDER - GI JOE - HASBRO
This Cobra Commander was the last mail-in figure produced with a straight arm (circa 1982). Yes, he was the last one produced before the swivel arm battle grip. Later in that very same year, he would be packaged with a Sears exclusive Cobra Missile Command Headquarters. What makes him so identifiable, besides the straight arm, is his different Cobra symbol. It is referred to as the Mickey Mouse head. To have a complete mint condition hat trick on this figure you also need his dark grey gun.