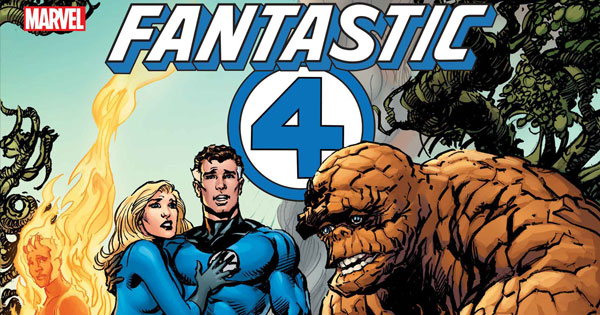 Marvel's next Fantastic Four epic asks the question who is Galactus' antithesis? Check out the press release and cover for this FF story that lands in August!

Press Release: The soaring sentinel of the space-ways may have finally met his match in the all-new series FANTASTIC FOUR: ANTITHESIS – the first full-length Fantastic Four story ever illustrated by industry legend Neal Adams! Adams is joined by Eisner Award-winning writer Mark Waid (Daredevil, Captain America, Fantastic Four), who jam-packs this tale with a fan-favorite roster of Fantastic Four heroes and villains! Together, this celebrated creative team create a new nemesis for the Fantastic Four guaranteed to send shockwaves throughout all of fandom.

“Working with Neal Adams has been a dream of mine since I was a kid. To share the page with a man of his talent is an honor,” Waid says. “The story begins with the Fantastic Four struggling to prevent an extinction event on Earth and just goes more cosmic from there. We all know of Galactus, but until now, no one has met his Antithesis.”

Adams shares his enthusiasm about the project. “I have always had the sense of missing the chance to draw the Fantastic Four. It was a quiet sense, since I’ve had every opportunity to do my favorites. More, I felt Kirby and Buscema had done it all, hadn’t they…?” he begins. “When Marvel’s Tom Brevoort asked if I’d like to do the Fantastic Four, I knew I had to ask for Galactus and the Silver Surfer as well. I am humbled and thankful to Tom for the opportunity.”

Who or what is the Antithesis, and will the combined might of the Fantastic Four, the Silver Surfer, and Galactus himself be enough to defeat it? Find out more when FANTASTIC FOUR: ANTITHESIS #1 hits comic shops in August!