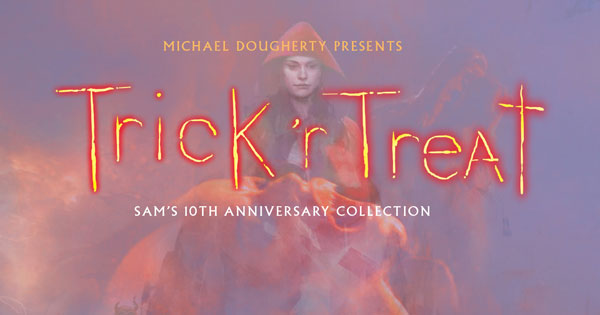 Legendary Comics has released motion trailer for the special deluxe edition Trick ‘r Treat comic book collection, now on sale. From the deliciously dark imagination of the film’s creator Michael Dougherty and perfect for Halloween, comes the celebratory omnibus—uniting the past two previously released graphic novels for the first time ever and featuring an all new special introduction from Dougherty, new cover art and other cool extras.

Press Release: From the deliciously dark imagination of the film’s creator Michael Dougherty (writer and director of Godzilla: King of the Monsters, and the holiday horror hit, Krampus). comes the definitive Trick ‘r Treat comic book collection in celebration of the 10th anniversary of this beloved horror saga.

Trick ‘r Treat, the graphic novel adaptation of the film, reveals four evocatively illustrated tales of horror interwoven into one unforgettable Halloween night as the unsettling figure known as Sam pays a visit to an unsuspecting community, wreaking havoc during the scariest night of the year.

And then, in Trick ‘r Treat: Days of the Dead, franchise icon Sam takes readers on a journey back through Halloween history with four chilling tales. Discover old-world lovers whose romance takes a chilling turn and Western pioneers who discover the dark side of the frontier. Travel to 1950s Los Angeles for a tale of pure horror noir and into the heart of small-town America to see some pranksters taught a lesson they’ll never forget. Across centuries of Halloween horror, wherever fear lies, Sam will be waiting…