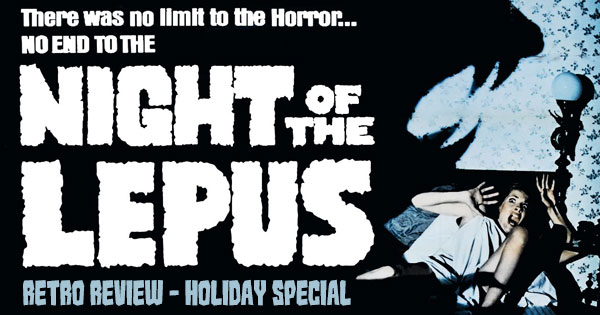 NIGHT OF THE LEPUS – RETRO REVIEW

This is a crazy film. Wait… you probably do not know what a Lepus is?  The word Lepus is the technical term for Rabbit.  So, basically, the title of the movie is the “Night of the Rabbits”.  Yeah, that’s right, killer rabbits almost like the Monty Python kind. However, these rabbits are bigger than a Mack Truck, bloodthirsty, vicious, and highly reproductive. You see, these rabbits are terrorizing a small town.

The plot is pretty standard and hasn’t really changed in the last 48 years. There is an overabundance of rabbits “terrorizing” a farm town in the west. Scientists are brought in to handle the surge in the rabbit population. Without some sort of control or purge of the rabbits, they will wipe out the entire area's farmland and create a desert. The kicker here is that the scientists are out to do no harm to the rabbits. They want to control them, humanly. It is a small child’s love for one of the rabbits that results in it being placed into the wrong cage. The fluffy creature escapes and then gets busy. Thus, a genetically enhanced super rabbit is set loose among the normal rabbits.

Like I said, nothing really new and not something we haven’t seen since. What is then so enticing about Night of the Lepus? Well, to start, the actors involved. First and foremost, many have had little “good” to say about the film after it was released and it became a late-night TV classic. However, I am sure everyone appreciated the money and the work when they got it. Let us remember that acting is a job like any other. Let’s start with Psycho alumnist, Janet Leigh. Yes, that’s right, the prey of Norman Bates is one of the scientists and a concerned mother who has to fend off an attack from the giant rabbits in her camper. Rory Calhoun, better known as Motel Hell’s Vincent is the farmer/ rancher who is trying to preserve his way of life. This guy is great and clearly doesn’t think less of the part he got in the film. DeForest Kelley (yep, that is Bones McCoy from Star Trek ) is in the very last role he would ever have that would not be associated with Trek! Kelly finds a monster rabbit hole and… well, it is fun.

This really is one that must be seen to be believed. The use of miniatures, real rabbits, and red “blood” paint are worth it. Trust me. This is the epitome of campy 70’s horror schlock. You’ll love it when the rabbits start licking blood off their teeth. It’s as cheesy as it can get, in a good way, but the menacing sound effect for when the rabbits are in full stampede is the icing on the cake.

As for the Blu-ray, yes, the brilliant minds at Shout! Factory have done a 2K transfer of the film and supplied new commentary. I dove into pop culture historian Russell Dyball’s commentary and learned more about this “ECO HORROR” film than I thought I would. Never did I know that the news broadcaster at the beginning was an inspiration for The Simpsons’ Kent Brockman (seen below). Dyball did get into the difference between the novel and the film, which I was curious about. He pointed out that two members of the cast were actually doctors on the USS Enterprise. You know one, but you should figure out the other. All the while he gave plenty of info on the crew behind the film. Many did go on to better things post-Lepus.

Shout! Factory again nails it with what B-Movie fans want in a release of this nature. A good transfer, but not one that is so good it ruins the late night B-movie mystique, a helping of new special features to learn more about the film, and, above all, a whole new reason to watch it again and again.