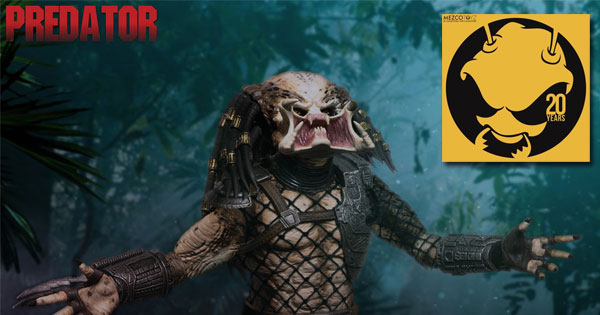 Well, we have had one Planet of the Apes release and now a Predator. Will Mezco release a Xenomorph and complete the more "adult" properties Disney purchased from FOX? The Predator looks incredible, I just wish we could see the box.

Press Release: Predator has arrived to hunt the One:12 Collective!

The One:12 Collective Predator is outfitted in battle armor with thermal netting and a fortified chest plate, allowing for greater mobility while hunting. The ruthless hunter comes with 2 removable bandoliers made from the bones of his prey and features a head portrait with an interchangeable mouthpiece and light-up bio-helmet – all attached via a magnet.

Predator always has the upper hand and comes complete with advanced weaponry such as a shoulder-mounted Plasmacaster with light-up function - capable of firing armor-penetrating plasma blasts at distant targets, wrist gauntlet with interchangeable blades, backpack with removable Medicomp, removable trophy accessories, and a severed spine and skull that can be held.

Characterized by their hunting of other dangerous species for sport and honor, Predators are a superhuman species that use a combination of highly advanced technology such as energy weapons and active camouflage.

THE ONE:12 COLLECTIVE PREDATOR FIGURE FEATURES:

Each One:12 Collective Predator – Deluxe Edition figure is packaged in a collector friendly box, designed with collectors in mind.

The One:12 Collective Predator – Deluxe Edition is available for preorder at https://mezcotoyz.com/one-12-collective-predator-deluxe-edition.