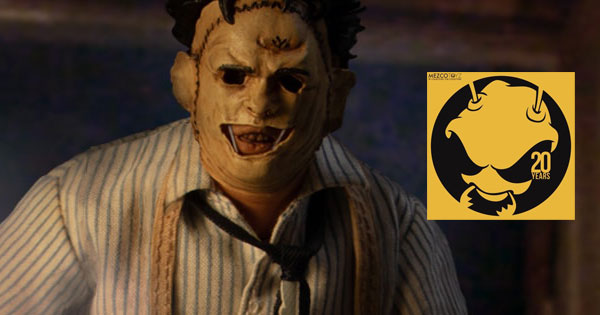 The horror genre is one I wish Mezco would embrace more, however, that makes the likes of Leatherface getting released all the more special! Full details, images and preorder link below. Remember, the saw is family.

Product Details: One of the first and most influential killers of the horror genre, Leatherface joins the One:12 Collective - fully-loaded with every dreadful weapon he wielded in the cult classic horror "The Texas Chainsaw Massacre” including his infamous chainsaw with revving sound!

The One:12 Collective Leatherface comes complete with 3 equally gruesome head portraits, including the infamous "Pretty Woman" and “Old Lady” masks as seen in the film. He is outfitted in a short-sleeved collared shirt and tie, Pam’s bracelet on his wrist, slacks, and cowboy boots. Also included is a removable suit jacket that Leatherface can wear with his “Pretty Woman” mask and an additional removable apron that he can wear with his “Old Lady” mask.

In ‘The Texas Chainsaw Massacre’, a group must do everything they can to escape a murderous group of outcasts including the chainsaw-wielding Leatherface, who wears a mask made of human skin.
‍

THE ONE:12 COLLECTIVE LEATHERFACE FIGURE FEATURES:

Each One:12 Collective The Texas Chainsaw Massacre (1974): Leatherface - Deluxe Edition figure is packaged in a collector friendly box, designed with collectors in mind.

The One:12 Collective The Texas Chainsaw Massacre (1974): Leatherface - Deluxe Edition is available for preorder at https://www.mezcotoyz.com/one-12-collective-leatherface-deluxe-edition.