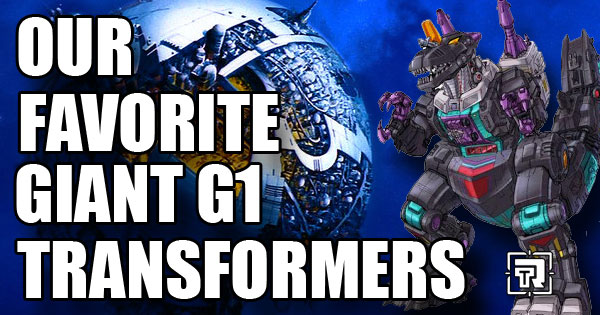 I thought I would look at back at some of the bigger first generations Transformers. Many die-hard fans will argue which of their origins is correct. Is it the one from the comic or the one from the cartoon? Personally, the cartoon has always been the cannon of Transformers for me. Don’t get me wrong, I thought the comic was great and Ratchet seeing all the dead Autobots hanging upside down is still one of the creepiest things I ever read in comics. The cartoon was just phenomenal and on, it seemed every day. It was my daily dose of science fiction right after G.I. Joe. The toys were a must have but the ones that I never got were the big ones. I thought it would be great to look back and see some of the bigger Transformers from generation 1. I included a few clips and commercials from that great era when the Transformers not only ruled television but the toy aisles as well.

He’s big, bad and beautiful or at least he was if you had all the Constructicons. I only ever had Mix Master, the concrete mixer. Once I came very close, with some friends to form Devastator. We were only missing an arm. Regardless this was the first of the big Transformers and the one that drove us all crazy. Sure there would be plenty of other combination Autobots and Decepticons that would create a huge robot but he was and forever will be the best. I was greatly disappointed in Michael Bays’ Devastator that looked nothing like the original design. Come on. How hard could it have been to make it look like just like the real Devastator? Instead of his first transformation scene, I thought Devastator squaring off the Dinobots in the Transformers The Movie (1986) would be more appropriate.

The toy was a bit clumsy but here was the first Autobot base. Complete with sentry tank and rocket launch pad. It was retro cool when the Autobots all looked like cars and trucks on the street. He was a brute and a bit slow but we would later learn in “The Secret of Omega Supreme” that he had a tragic backstory. This story revealed that he was a heroic soldier that lost everything and that the only thing he had left was his revenge. Not a bad character for a show about transforming cars and planes. This was also one of the few Transformers that would operate on batteries, allowing Omega Supreme to walk! The flowing clip is Omega Supreme’s first toy commercial.

With all the little planes, cars, and creatures forming bigger robots there was one that stood out above them all. When you combined all the Predacons they formed Predaking. What made Predaking and all the Predacons so badass was that they were bigger than Jazz, Sideswipe and all the Decepticon jets. These weren’t little robots. They were more on a scale with Megatron than most of the toys in the line. Put them all together and that was one big ass robot. Collectors look for the Predacons with mostly metal parts. They are the ones worth picking up. If you are still lost fear not, check out the Teletran file on the Predacons below.

If you saw Transformers: The Movie in the theater consider yourself lucky. To see Unicron transform on the big screen must have been an incredible sight. Toys R Us had an exclusive on Unicron though sadly he was nearly the same size as most Optimus Primes and Megatron giant-sized figures. Imagine how big he would be if he were to scale with those two robots. It would be awesome. The flowing clip stars Leonard Nimoy as Galvatron and in one of his last performances, Orson Welles as Unicron.

I had to the chance to play with the Autobot city and transform him from robot to car carrier to city. It wasn’t fun and as Tom Hanks says in Big (1988) “…who wants to play with a building?” On the animated series he had some epic battles with Trypticon but let’s face it, Metroplex was not the giant robot to have. Again the scale thing comes into play. If they wanted to build a fort for the Autobots or a playset why not Teletraan 1 or more commonly known as the Ark.

The complete opposite of Metroplex is Trypticon, a huge hulk of a creature that was the Decepticons’ answer to Godzilla. This brute was always ready for a fight. Built by the Constructicons he was once a human city who had different three modes (city, a mobile battle station, and a Tyrannosaurus Rex). Like Omega Supreme he too was battery operated and could walk. Unfortunately, Trypticon’s appearances were usually shown enders as the battle would conclude with Metroplex beating the tar out of him. Whoever thought a T-Rex would make a good warrior must have been crazy. I mean those tiny arms? Come on. Here is a clip of his first transformation. One has to wonder how many humans were crushed in the birth of the new Decepticon.

Scorponok, like the next Transformer on the list, marked the end of the G1 Transformers. Once the Headmasters entered the storylines it was a strange new world where humans/ humanoids and Transformers merged to fight side by side. Scorponok is the second-largest toy from the original Transformers toy line and then only taller than Trypticon. Like many of the big Transformers, he had three different modes. Yet where Metroplex was a transport and a city, Scorponok was a giant killer scorpion and a flying city. This toy still outshines many of the new and improved Transformers of today. The following is his first TV spot.