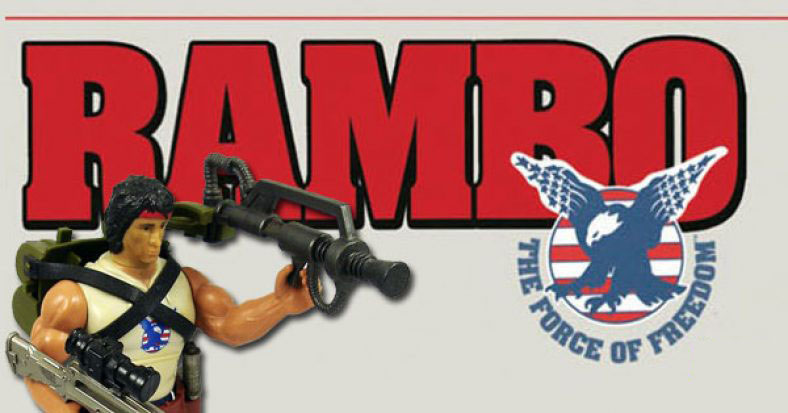 It seems hard to believe, now, but there was, in fact, a toy line for a cartoon series based on two Rated R movies. Certainly, there had been toys for Rated R movies in the past, Kenner's Alien being the most notable. This was different, this was a 6-inch toy line wrapped around a Vietnam War Veteran who was looking for his place in the world. Obviously, there were some changes, storywise, from the film to the cartoon, but when you look at characters like Sgt. Havoc, Col. Troutman, and John Rambo its hard to say there aren't directly from the film (Rambo: First Blood Part II.

Rambo & The Forces of Freedom Action Figure Toy Commercial
There is a lot to digest on this TV spot. It is the full product line for the cartoon series. It also features music from Jerry Goldsmith incredible score from both Rambo films!

Original Rambo Toy Commercial
First off, it only takes one missile silo to rule the world? Secondly, the rocket on Rambo's RPG was attached to a string. I know, I had one.

Havoc vs Turbo
Sgt. Havoc was the figure I really wanted when these came out. My parents got my Col. Troutman.

Kat and the Assult Vehicle
Who made up this sandbox for these actors to play in? It's amazing!

1991 Coleco Rambo Toy Advertisement
Where is Rambo in this spot? I appreciate spotlighting the villains but no hero in peril for the TV spot?

Col. Troutman and Sgt. Havoc
If Troutman did fire that machine gun, wouldn't he be flailing all over the place?

Savage Strike Cycle and Skybo Jet
Wouldn't Rambo freeze to death flying that jet without a shirt on? He did have a figure wearing a shirt (see the header image above).

Rambo: The Force of Freedom (intro | cartoon) 1986
Remember what I said about it not being like the movie? Watch the opening to the cartoon here and then the trailer for the second Rambo film below.