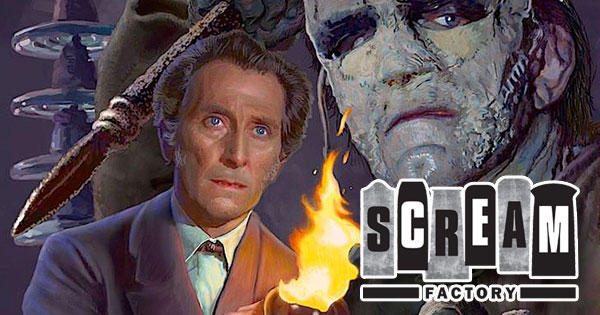 SCREAM FACTORY PRESENTS THE EVIL OF FRANKENSTEIN [COLLECTOR'S EDITION] ON BLU-RAY™ MAY 19, 2020

Hammer films are the greatest treat during the month of October. Since October seems like years away, today, we are thrilled that Scream Factory is released The Evil of Frankenstein in May! Full details, new cover art, trailer, and pre-order link below!

Press Release: The Evil Of Frankenstein [Collector's Edition] comes to Blu-ray™ on May 19 from Scream Factory. Customers ordering from ShoutFactory.com will receive an exclusive 18" X 24" rolled poster featuring our brand new artwork, available while supplies last.

Horror great Peter Cushing stars in this fantastic tale as the monster's creator, Baron von Frankenstein, determined to bring the creature back to life. Long thought destroyed, Dr. Frankenstein's creation is discovered frozen alive and resurrected in his laboratory. Unfortunately, the creature's mind is dormant and, much to the Baron's horror, he finds that only a hypnotist can order the creature to do his unfathomable bidding now.