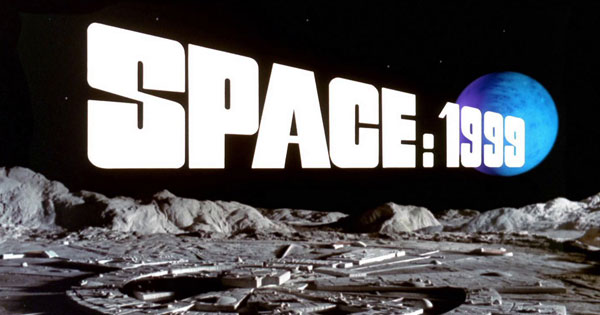 Relax. Don't panic. This not a lengthy review of the complete series of Space: 1999. In fact, I am still watching the series. I applaud Shout! Factory for releasing a complete box set of Space: 1999, with their usual amount of new bells and whistles. I asked them for this box set because I had long wanted to see what Space: 1999 was all about. I have seen model ships of the show's spacecraft, The Eagle, in numerous flea markets for years. The model was easily obtainable. The source material, the show, was not. I knew the star, Martin Landau (Ed Wood, North by Northwest), and knew it was about a space station on our Moon that was hurtling through space, but that was about it. Having seen nearly every episode of Star Trek (from every decade), Farscape, Buck Rogers, a lot of Doctor Who, and both Battlestar Galacticas, I wanted to jump in feet first. I am glad that I did.

Synopsis: September 1999: A nuclear waste dump on the lunar surface unexpectedly detonates, blasting the Moon out of Earth's orbit and taking the inhabitants of Moonbase Alpha on an unbelievable voyage of discovery and adventure. Under the command of John Koenig (Martin Landau), the Alphans hurtle through the stars, encountering fantastic worlds and beings in a universe where peril awaits at every turn. Together, Koenig and the Alphans face the ultimate challenge in the farthest reaches of space: survive ... and find home.

The series itself was not what I expected and yet it was. Space: 1999, much like Star Trek, was a show that clearly inspired the creators of Farscape, new incarnations of Star Trek, and other sci-fi shows to push the boundaries of storytelling and character. Character is what is lacking here in Space: 1999. It's not that there aren't any, it's just that there is no character development. Our commander, John Koenig (Landau), is a good guy and wants to do the right thing for his people. His science officer, Prof. Victor Bergman (Barry Morse), is a thinking man, someone who looks at a problem from every angle. The station's doctor, Helena Russell (Barbara Bain), works through both the physical and mental issues with all her patients. Finally, we have the station's lead pilot, Alan Carter (Nick Tate). He is a tad reckless and reacts before thinking through a problem. That is literally all I know about these characters and I have watched 7 episodes. There is the slightest hint that there is something between Commander Koenig and Dr. Russell, but so far, we haven't actually seen anything yet. If fact, if the two actors weren't married at the time, it probably wouldn't even be a thought. It's also odd of how much of the bridge crew we see on a regular basis, but don't know anything about them other than "he has a blue stripe on his sleeve and she has a brown one". Yet, there they are conversing with the principle leads week after week. It's a watch, rinse, and repeat type of show. Never do we see a character-defining moment carry over. So why invest your time then? Well, I'll tell you, the stories and the guest stars.

There is no set order to the episodes, outside of the pilot, so Shout! Factory has placed them in production order. This can be confusing sometimes, especially with only 300 people on the station and 1 or 2 people dying each episode.

"Breakaway" - The pilot sets the stage for this space station/ nuclear waste facility on our Moon. John Koenig takes over as the new commander of Moonbase Alpha and things go horribly wrong as the nuclear waste explodes and pushes the Moon out of Earth's orbit. The crew of Moonbase Alpha, with little choice, decide to go for a ride and hope they can find a liveable planet as they hurl through space. Little discussion is had about surviving, living conditions, or the other nuclear waste deposit which has yet to explode.

"Black Sun" - The crew is flying toward a Black Sun and Koenig decides to create a lifeboat of six people to survive on if the Moonbase Alpha does not survive the radiation. There is little tension between the crew on who gets a shot to live. Instead, it's all about the tension between Koenig and Dr. Russell, which is odd because, as the only physician on board, she is the logical choice to go.

"Guardian of Piri" - This has a space babe (Catherine Schell) who tempts the whole crew to wash away their worries on Piri. It ends very oddly opening up the possibilities that the Alphans may have to reestablish life on the planet.

"Matter of Life and Death" - Dr. Russell's presumed-dead husband, played by Richard Johnson, should have been a bit crazier than it was. This episode followed the pilot episode and we were lead to believe (a la the pilot) that mankind hadn't traveled too far into space, but here was this lost astronaut alive and well. A prime place for tension between Koenig and Russell but no romantic involvement or interest had been established.

"Earthbound" - This episode features the great Christopher Lee as a leader of a crew of aliens traveling to Earth. They allow the Alphans to realize that they are now 75 years away from Earth. They also have a sleep chamber that will allow one human to return to Earth with them. One crew member, a sleazy politician played by Roy Dotrice, who was seen in the pilot but not again until this episode, does anything and everything to go. The odd part is, he really has no function on the Moonbase as he was only there visiting when the accident happened. Koenig insists that the computer make an unbiased choice on who should go. Yet with no other real option (pregnant woman, terminally ill crew member, 1 half of a married couple), as a viewer, it should be the politician. Koenig's logic makes no sense.

"Another Time, Another Place" - This is one of those Sci-Fi episodes that gives us one possible ending but then allows the show to keep moving forward. The Alphans are split in time and live out a full 5 years on the surface of an Earth-like world. When the Alphans in our time investigate the planet, they find their future selves but direct contact with their older counterpart is lethal. One of the better episodes, thus far, and worth the watch.

"Missing Link" - Features another Hammer Films alumnus, Peter Cushing. Cushing plays an alien scientist who wants to observe Koenig and the Alphans, separately. We've seen this time of human guinea pig story before. What ruins the episode is how quickly Koenig falls in love with Cushing's daughter (Joanna Dunham). It's not even play-acting for Koenig to escape and left me wondering if I had missed maybe 30 minutes of the story.

Final thoughts (thus far): I am till entranced by Space: 1999. In trying to make sense of the order of episodes, I did notice that upcoming guest stars include Joan Collins (Star Trek), Julian Glover (Game of Thrones), Ian McShane (Deadwood), and Patrick Troughton (Doctor Who). Stories include finding one of the Voyager probes, the first birth on the Moonbase, attempting to grow more food on the Moonbase, as well as some strange looking red-headed woman (Catherine Schell in a different role) in Season 2. Why this show hasn't been rebooted is beyond me. It's a little Land of the Lost, a lot of Lost in Space, with a Star Trek sugar coating. The miniatures and space scenes are superb, especially for mid-1970's television. My final bit of advice is to give it a whirl, it's worth the trip.