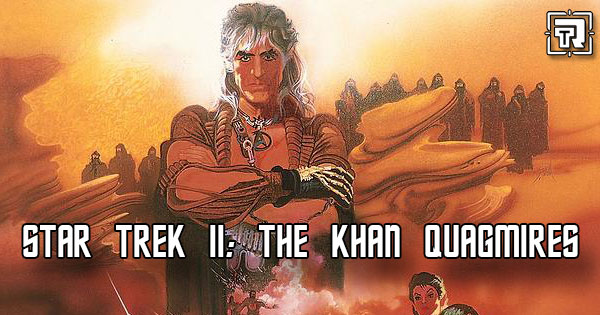 Star Trek II: The Wrath of Khan, what Trekkie doesn’t love this movie? It is a great adventure story, ties into the original series perfectly, and is the one we love to quote more than any other. I’ve seen this film at least a hundred times, but to watch it as a film critic, is to see it with a different eye. I noticed a few things about the story in The Wrath of Khan which, for my one hundred first time watching it, I thought would be fun to point out. Problems with the script are easily forgettable as Khan (Ricardo Montalban) and Admiral James T. Kirk (William Shatner) battle around Regula One and the Mutara Nebula quoting Herman Melville, John Milton, and Charles Dickens. So today, June 4th, on the anniversary of its theatrical release, let us look at a few of the quagmires that plague Khan.

I never forget a face, that I never met?!

To be fair it all started with my recent screening of the first season episode of Star Trek’s “The Space Seed”. I had watched Khan’s episode throughout the years and never noticed this one thing before. I noticed that one member of the Enterprise crew was not present, Chekov (Walter Koenig).  When Khan and Chekov meet on Ceti Alpha 5, Khan tells him that he never forgets a face and then says his name. This is funny because they have never met. Certainly, this could have been a moment off-screen, nonetheless, it made me wonder. This might be nothing new to a hardcore Trekkie, but it threw up the first red flag.

Earlier in the film Lt. Saavik (Kirstie Alley) has an emotional response during her test of the Kobayashi Maru test. An odd moment from a pure-blooded Vulcan and particularly odd because she knows that it is just a test. What about her crying at the end? Is she weeping for Spock as she would a bother like Spock did for V'ger (in Star Trek: The Motion Picture)? In doing a little research, online, it was removed from the film that Saavik is actually half Vulcan and half Romulan. Who, as all Trekkies know, are emotional beings.

The mute followers of Khan.

Chekov and Captain Terrell (Paul Winfield) apparently can’t emergency beam off of Ceti Alpha 5 nor put up much of fight; from people who probably have no phasers after being marooned on a planet for fifteen years. Khan’s unmasking, through incredibly dramatic, is also strange as if he was either the last one to arrive or watched everyone else undress. All odd, but let us talk about Khan’s ageless, mid-twenties followers. They seem more like the prodigy of those marooned, but that was only fifteen years ago. Also, how come none of them have the power of speech, save one (Judson Earney Scott, seated above)? Did Khan cut out all their tongues? Perhaps it wasn't in the film's budget to having Khan's minions speak?

The rats and the super phaser!

Another quagmire occurs when Doctor McCoy (DeForest Kelley) encounters a rat on Regula One. The slaughtered scientists haven’t been dead long enough for riga mortis to set in, but the rats have already come out of hiding? Rats, that exist on a science space station, in the 23rd century? Yeah, okay. Then, several minutes later, Captain Terrell turns a phaser on himself committing suicide. The beam blast is so powerful that it also disintegrates the very same phaser that emits the energy? What? There are more than just a few leaps of simple logic here.

I am not turning in my Trekkie card or telling you that I am more in the Star Wars camp than the Star Trek one. I still love The Wrath of Khan and upon my next screening, all this will just fade away. Just this once I saw it with a critical eye and noticed the universal favorite of all Star Trek movies does have its flaws too. For the next Trek release, I’ll tackle the film’s plethora of deleted scenes that have been circulating on television and in director’s cuts.