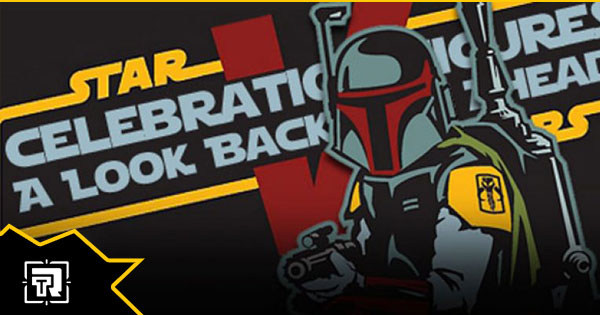 Star Wars Celebration is time for Star Wars fans to gather and indulge in their favorite obsession. This year, due to the pandemic, the event has been canceled and rescheduled for 2022 (see details HERE). As there has been with several Star Wars Celebrations, since 1999, there has been a variety of exclusive action figures  I thought I would take a look back at what Star Wars Celebrations have brought, in action figures. Thankfully, many of these "exclusives" have doubled for Comic-Con exclusives as well. This is not a complete list. Just a sample of what Hasbro, Lucasfilm Ltd., and, now, Disney, have brought us.

Celebration 1 (April 30-May 2, 1999) and Celebration 2 (May 3-5, 2002) were both unprecedented events in the history of Star Wars. If you know anyone who went to either they’ll equally rave about the event and about how long some of the lines were. The first event didn’t warrant an exclusive figure however Celebration 2 yielded Commander Jorg Sacul aka George Lucas as a Rebel X-Wing Pilot. A clever figure but not the last in a small run of the director in action figure form. Originally it was highly sought after by collectors. They soon became readily available in Europe and the figure lost some of its luster.

Celebration 3 (April 21-24, 2005) was completely focused on Episode 3 and who better to feature as an exclusive than Darth Vader himself. As collectability goes a graded one can fetch a good price. Then again what graded collectible can’t? The average price for Vader is around $20.00 on eBay. If you absolutely have to have it, it shouldn’t be that hard to get.

Celebration Japan (July 19-21, 2008) is really the one I regret not going to. I truly love Star Wars but to visit Japan and a Celebration would have been incredible. There wasn’t a traditional exclusive action figure but the TOMY Remote Control R2-D2 comes pretty close.

Celebration 5 (August 12 - 15, 2010) is really was a no brainer in what they were celebrating this year. After all this was the 30th Anniversary of The Empire Strikes Back. To commemorate both Celebration 5 and the movie the exclusive that year was a 4-LOM and Zuckuss two pack. The two bounty hunters came in retro Empire Strikes Back packaging. 4-LOM already had a retro figure out in stores then, yet the Zuckuss figure was not packaged this way. The packaging alone makes it a must-have.

Hasbro and Lucasfilm doubled up the exclusives that year with a comic book two-pack featuring both Cami and Fixer. These two characters were both cut from A New Hope. Their scenes were the stuff of legend but now can easily be found on the internet.

The first was a collection of characters that you meet on the Star Tours ride. Five crazy figures that will be a fond memory of the ride that once was. Disney has had a collection of robots and R2 Units in the past, exclusive to Star Tours, but this 5 pack was worth picking up for the nostalgia alone.

There was also a limited edition (to 10,000) "Starspeeder 1000" which was the new vehicle in next incarnation of the Star Tours ride. Star Tours reopened in 2011 with a new 3-D immersive experience.

Celebration Europe II (July 26–28, 2013) If you wanted this one, you had to travel all the way to Messe Essen Germany (but it did appear at Comic-Con that year too)! I made the trip myself and was thrilled to see this particular figure rise in value, however, there was more to the event than just this figure. Celebrations may come and go, but there is nothing quite like seeing Star Wars from a foreign perspective. If anything, it highlighted how alike Star Wars fans are, no matter what language they speak.

Celebration Anaheim (April 16–19, 2015) took us to California and close to Disneyland (literally right next door). It's great when after-hours fun at Celebnration can include a theme park with Star Wars atteractions. This Celebration had an exclusive Grand Admiral Thrawn. Now, Hasbro would re-release Thrawn on Force Friday II, however, he would not come with this insane amount of accessories. We are still on the hunt for this one and its all abount finding him at a good price.

Celebration Europe III (July 15–17, 2016) took place in London and brought to us a fabulous addition to the Black Series line. Here we received a Kylo Ren with not only Darth Vader's helmet, but a banner and stand with the logo of the First Order upon it. We did get the unmasked Kylo later, however, with the Vader helmet included, it makes this release one of those crazy accessories we have to have.

Celebration Orlando (April 13–16, 2017) had a special anniversary to commemorate, the 40th anniversary of A New Hope. This marked the first time that Hasbro would re-release Rebel Pilot Luke Skywalker (Archive being the most current release). What I particularly love about this figure, besides how great it looks and the packaging, is that, finally, this Luke, unlike his original Kenner counterpart, came with a lightsaber and a blaster.

Celebration Chicago (April 11-15, 2019) allowed Hasbro, Lucasfilm Ltd., and Disney will celebrate the 20th anniversary of The Phantom Menace. The Darth Maul was a re-release but the Obi-Wan was all new. The packaging is also a great touch as it reminds of us that long crazy night at Toys R Us waiting to buy new figures.

We'll see you at the next Star Wars Celebration!