Disney and Lucasfilm have revealed a slew of new products that are driving us nuts here at Total Toy Recon. Now there was a lot revealed today, with more to come. Below, under the press you will find what here will be ordering and hunting for in the weeks to come. The must-haves, right now, are the Retro Collection releases featuring 'The Mandalorian' characters. Many of these items are for presale on October 13th. #thisistheway

Press Release: Disney and Lucasfilm today launched “Bring Home the Bounty,” a global consumer products, games and publishing campaign to debut new Star Wars™ products every Tuesday from now through Dec. 28, helping fans find the perfect bounty for their family, friends and themselves this holiday season.

The 12-week program will include reveals of items inspired by the expansive Star Wars portfolio including Lucasfilm series like “The Mandalorian” and “The Book of Boba Fett,” classic content like the Skywalker saga films, new animated works like “Star Wars: The Bad Batch” and “Star Wars: Visions,” and much more. Each Tuesday, new goods across toys, apparel, action figures, accessories, books, comics, games content and more will debut on BringHomeTheBounty.com, as well as with retailers globally, helping fans to round out their holiday wish lists.

"With the Lucasfilm 50th anniversary coming to a close this year, we wanted to find a way to celebrate all of our beloved characters and stories from the classic to the new and everything in-between” said Paul Southern, Senior Vice President, Franchise & Licensing, Lucasfilm and National Geographic, Disney Consumer Products, Games and Publishing. “There will be something to excite every Star Wars fan this year with such a wide assortment of items to enjoy and engage with, whether fans are adding to their own collections or scouring for the perfect gift.”

New products and content across consumer products, games and publishing, including items from Hasbro, The LEGO Group, Funko, Mattel and many more, will be revealed each Tuesday at 6:00 a.m. PDT / 9:00 a.m. EDT, with select pre-orders starting Wednesdays at 10:00 a.m. PDT / 1:00 p.m. EDT. Products can be found at top retailers globally, including shopDisney.

Additionally, for this week only, as part of a collaboration with Disney and Lucasfilm, UPS will use vehicles for select delivery routes in both the New York City and Los Angeles metro areas that will be specially wrapped to resemble a Jawa sandcrawler - the huge treaded fortresses used by Jawas as transportation and shelter in the Star Wars galaxy. The collaboration will help build excitement and anticipation for the many bounties to be delivered this holiday season. To further engage fans, audiences will be invited to enter the Star Wars Spot the Sandcrawler Sweepstakes on the Disney Products Instagram page for their chance to win Star Wars prize packs from shopDisney.com. See official rules and learn more at StarWarsSpotTheSandcrawlerSweepstakes.com*.

About Disney Consumer Products, Games and Publishing
Consumer Products, Games and Publishing (CPGP) is the division of Disney Parks, Experiences and Products (DPEP) that brings beloved brands and franchises into the daily lives of families and fans through products – from toys to t-shirts, apps, books, console games and more – and experiences that can be found around the world, including on the shopDisney e-commerce platform and at Disney Parks, local and international retailers, as well as Disney store locations globally. The business is home to world-class teams of product, licensing and retail experts, artists and storytellers, and technologists who inspire imaginations around the world.

About Lucasfilm Ltd.
Lucasfilm Ltd., a wholly-owned subsidiary of The Walt Disney Company, is a global leader in film, television and digital entertainment. In addition to its feature film and series production, the company's offerings include cutting-edge visual effects and audio post-production, digital animation, immersive storytelling, and the management of the global merchandising activities for its entertainment properties including the legendary STAR WARS and INDIANA JONES franchises. Lucasfilm Ltd. is headquartered in northern California.

Lucasfilm, the Lucasfilm logo, STAR WARS and related properties are trademarks and/or copyrights, in the United States and other countries, of Lucasfilm Ltd. and/or its affiliates. © & TM 2021 Lucasfilm Ltd. All rights reserved.

About Disney+
Disney+ is the dedicated streaming home for movies and shows from Disney, Pixar, Marvel, Star Wars, and National Geographic, along with The Simpsons and much more. In select international markets, it also includes the new general entertainment content brand, Star. The flagship direct-to-consumer streaming service from The Walt Disney Company, Disney+ is part of the Disney Media & Entertainment Distribution segment. The service offers commercial-free streaming alongside an ever-growing collection of exclusive originals, including feature-length films, documentaries, live-action and animated series, and short-form content. With unprecedented access to Disney’s long history of incredible film and television entertainment, Disney+ is also the exclusive streaming home for the newest releases from The Walt Disney Studios. Disney+ is available as a standalone streaming service or as part of The Disney Bundle that gives subscribers access to Disney+, Hulu, and ESPN+. For more, visit disneyplus.com, or find the Disney+ app on most mobile and connected TV devices.

Description: "From the popular animated series on Disney+, Star Wars: The Bad Batch™, Kotobukiya presents a series of 1/7 scale model kits!
The Bad Batch, technically known as Clone Force 99™, is the result of Kaminoan™ experiments to create a specialist unit of clone commandos. Hunter™, their leader, was engineered with heightened senses, making him an expert tracker. Hunter, with his shaggy hair and skull tattoo that covers half of his face, stands out among the members. Details like the skull emblem, and the sheath from this vibro-knife on his left arm are carefully sculpted in 1/7 scale. You can display this piece with the knife from ARTFX Star Wars Wrecker™ in his left hand (knife not included in this product). Add Hunter to your collection today!" 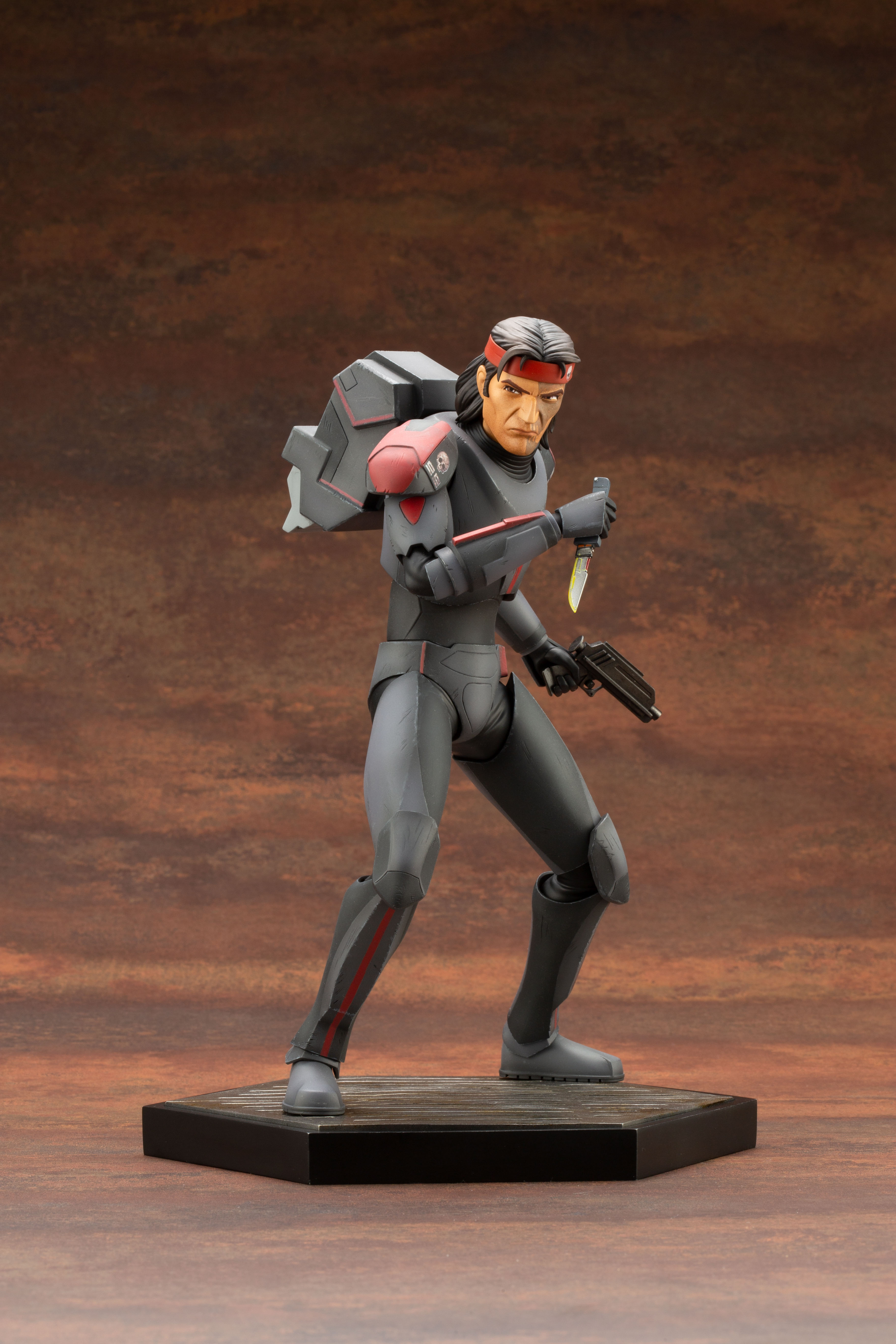 Description: This KX-series droid was created to perform additional security for the Galactic Empire, though he was reprogrammed to assist the Alliance in their fight against the Empire. Now is your chance to collect the exclusive Pop! K-2S0 (Jedha). Expand your STAR WARS™ collection with the exclusive, special edition K-2S0 (Jedha) which comes with a matching enamel pin. Pop! vinyl bobblehead is approximately 4.75-inches tall. Enamel pin is approximately 1.5-inches tall. 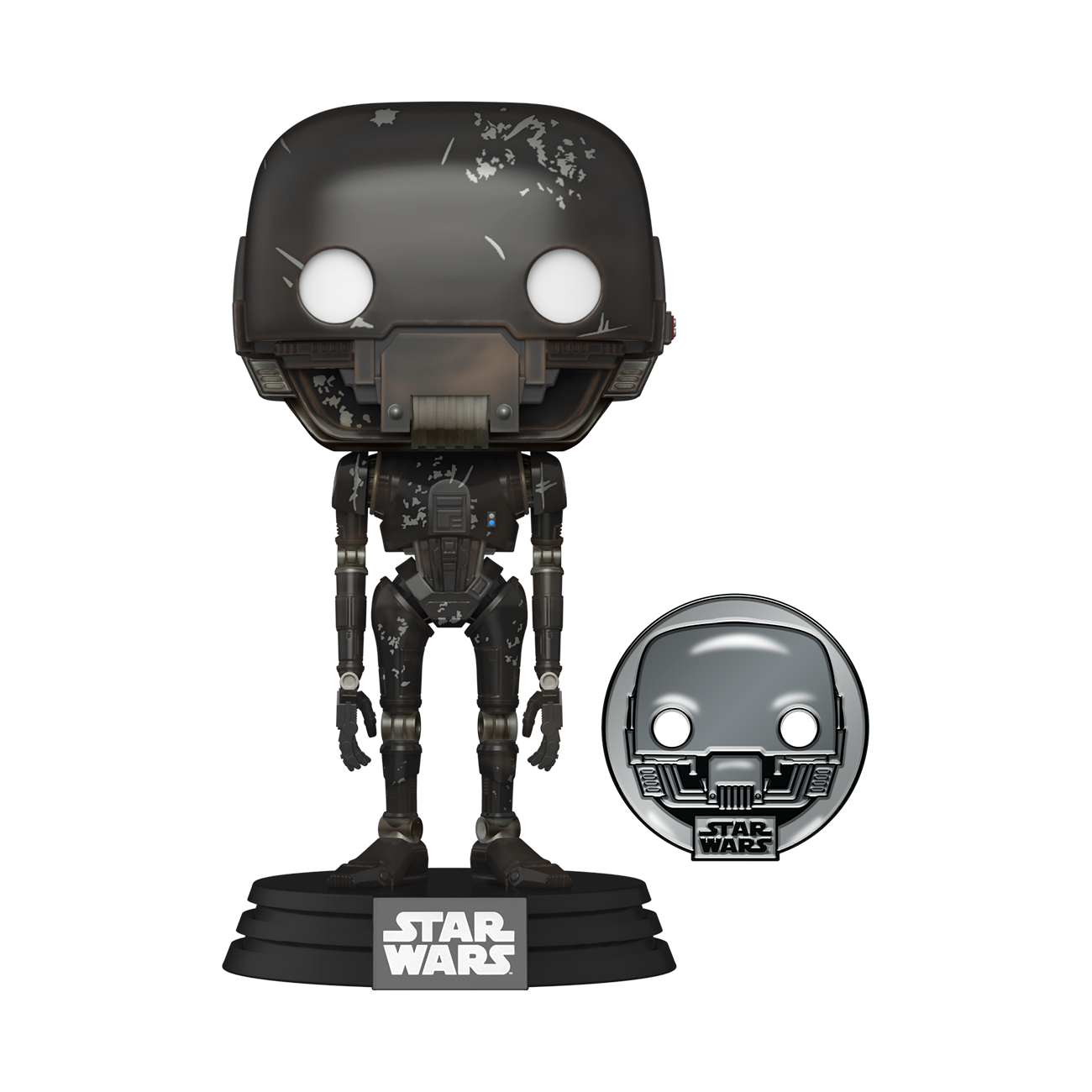 Description:
This Gigoran mercenary is available for hire for those needing a skilled gunner among their ranks. Now is your chance to collect the exclusive Pop! Moroff. Expand your STAR WARS™ collection with the exclusive, special edition Pop! Moroff. Pop! vinyl bobblehead is approximately 4.75-inches tall. 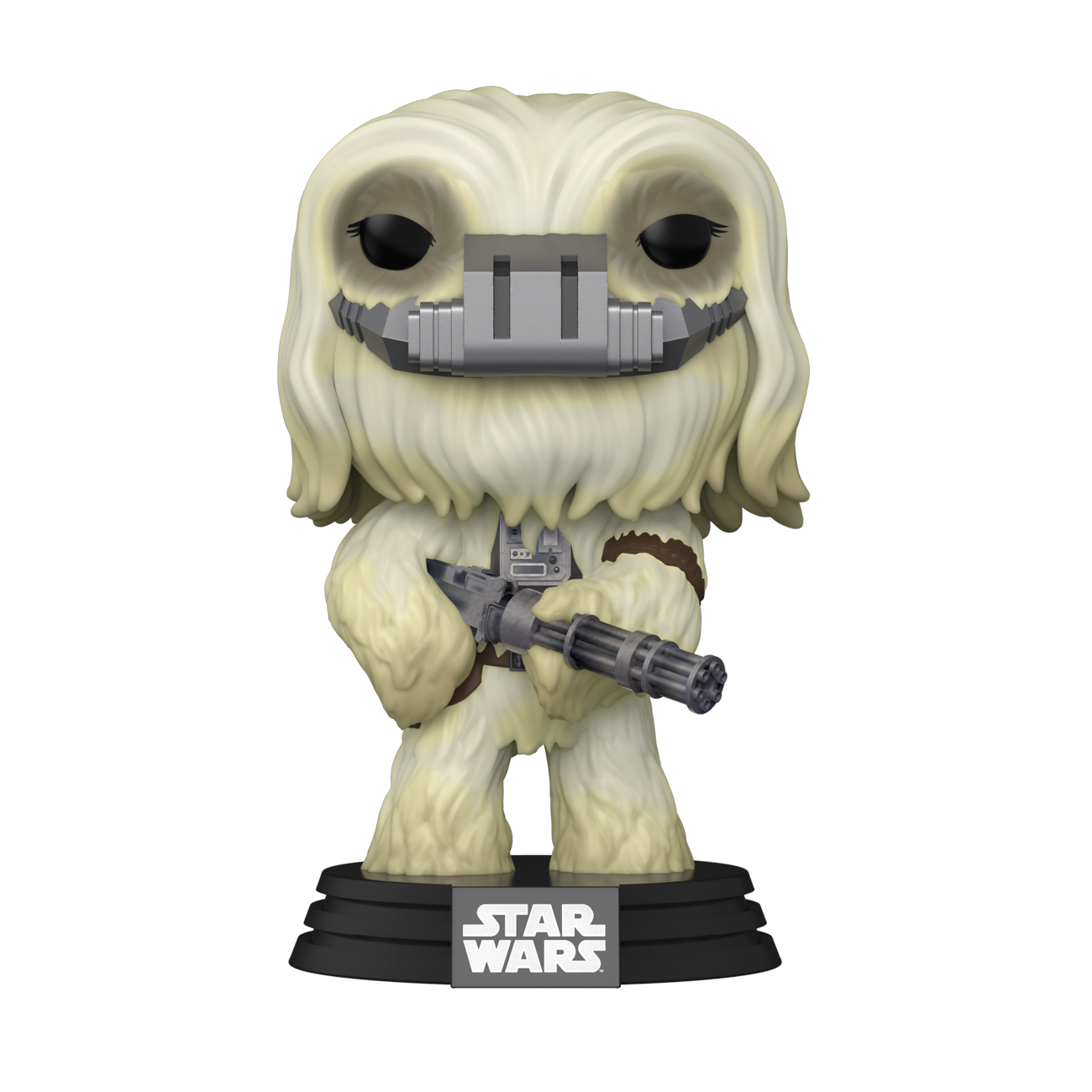 Description: These 3.75-inch-scale Retro Collection figures are detailed to look like the characters from Star Wars: The Mandalorian live-action series on Disney Plus, featuring design and detailing inspired by 1970s Star Wars figures.. With exquisite features and decoration, this series embodies the quality and realism that Star Wars devotees love. 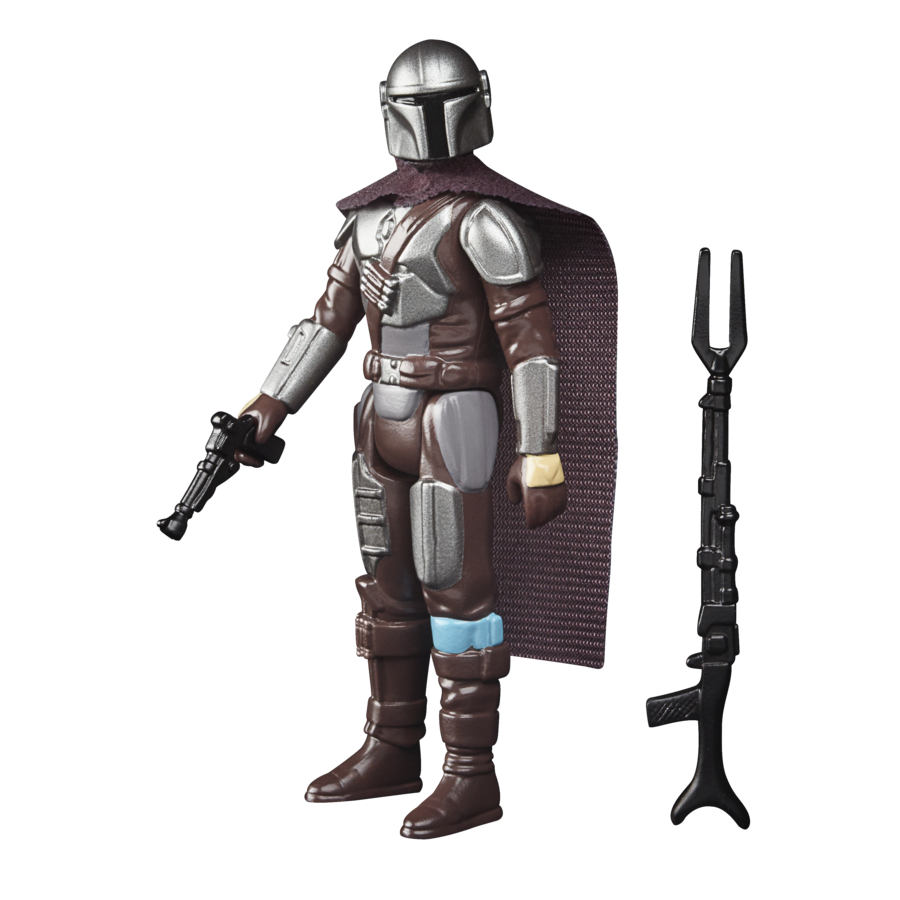 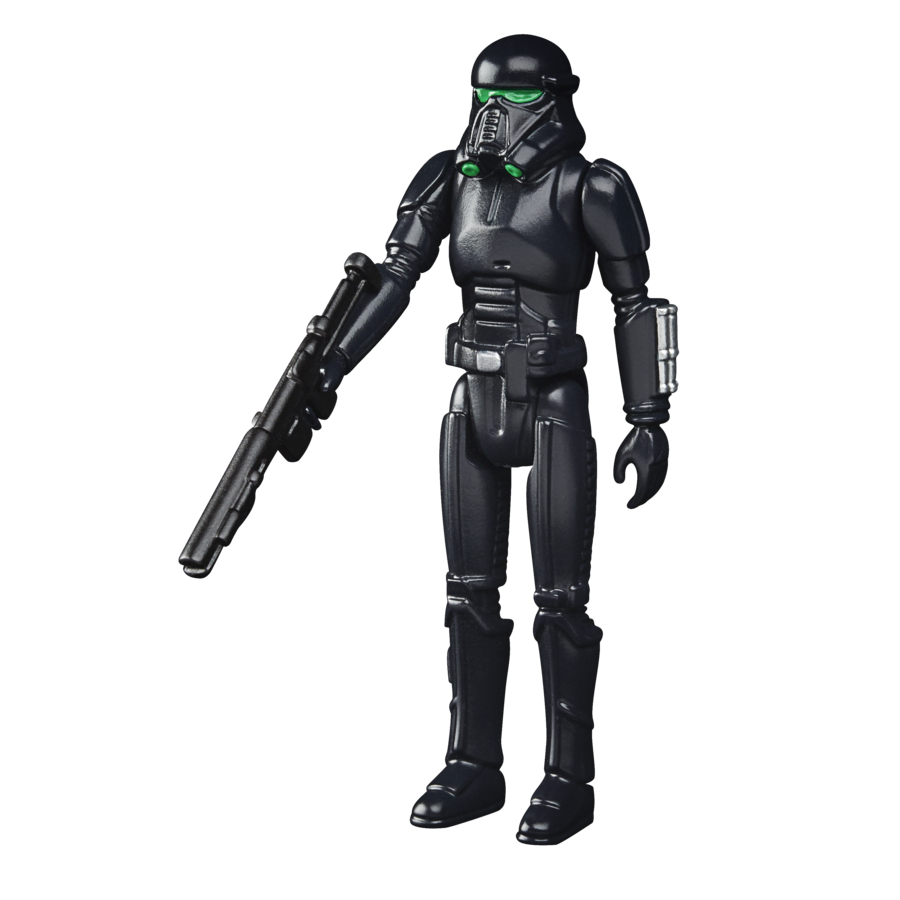 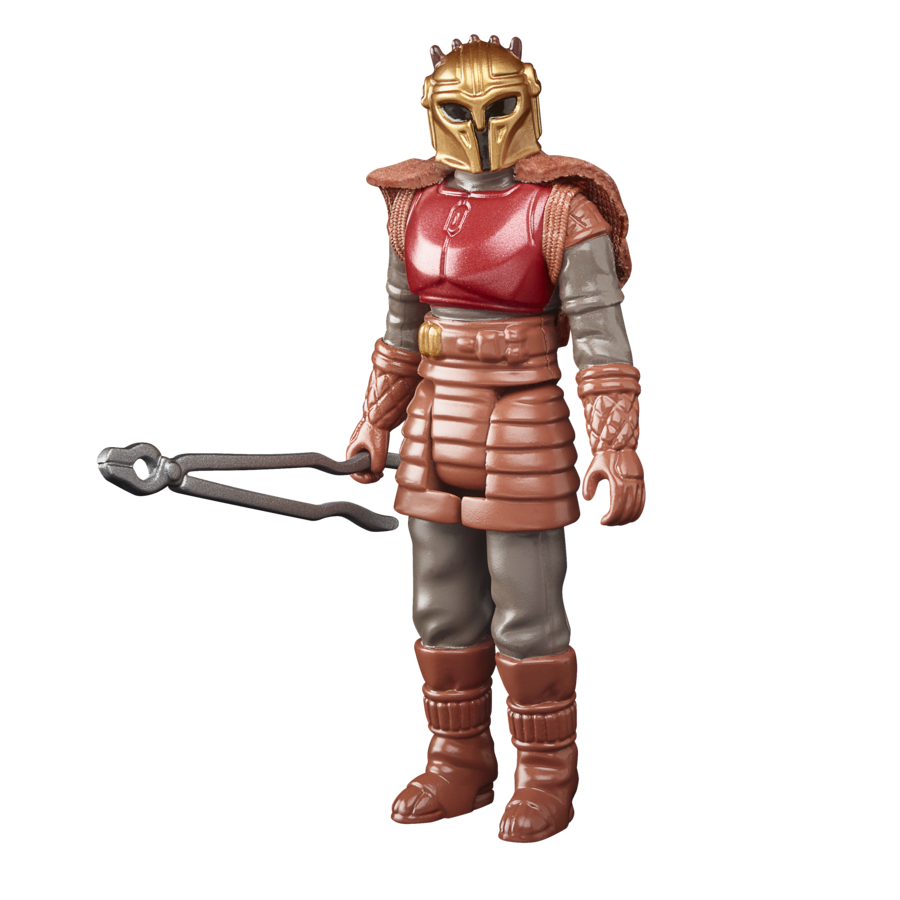 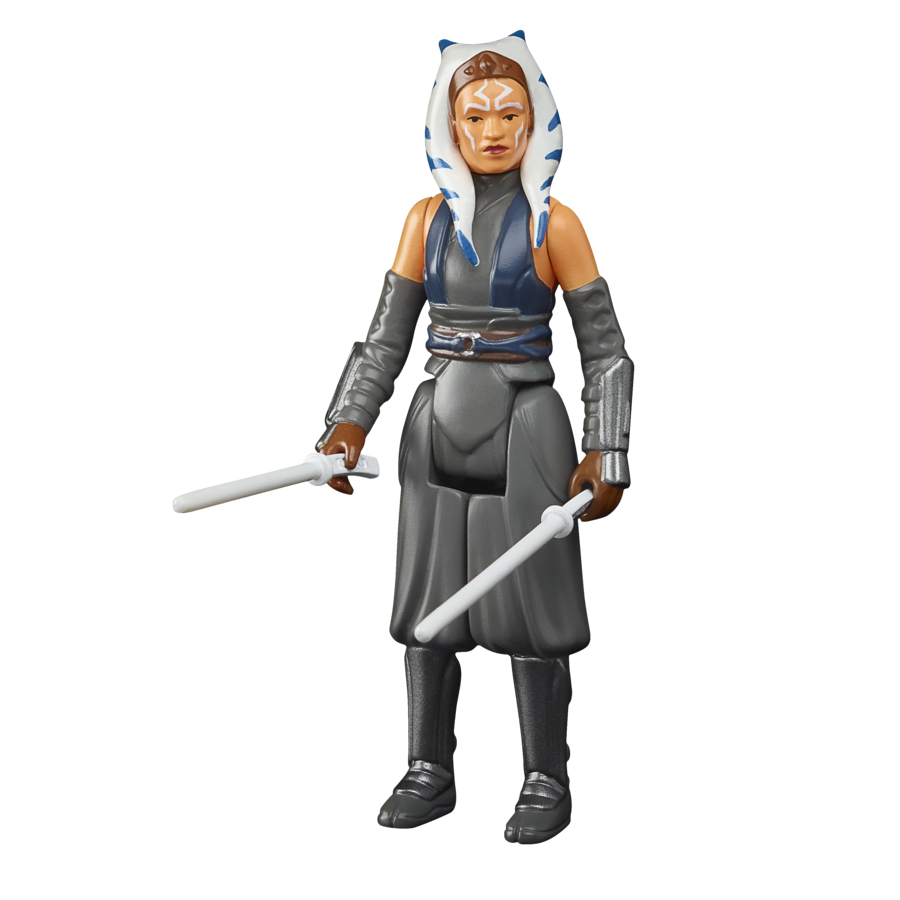 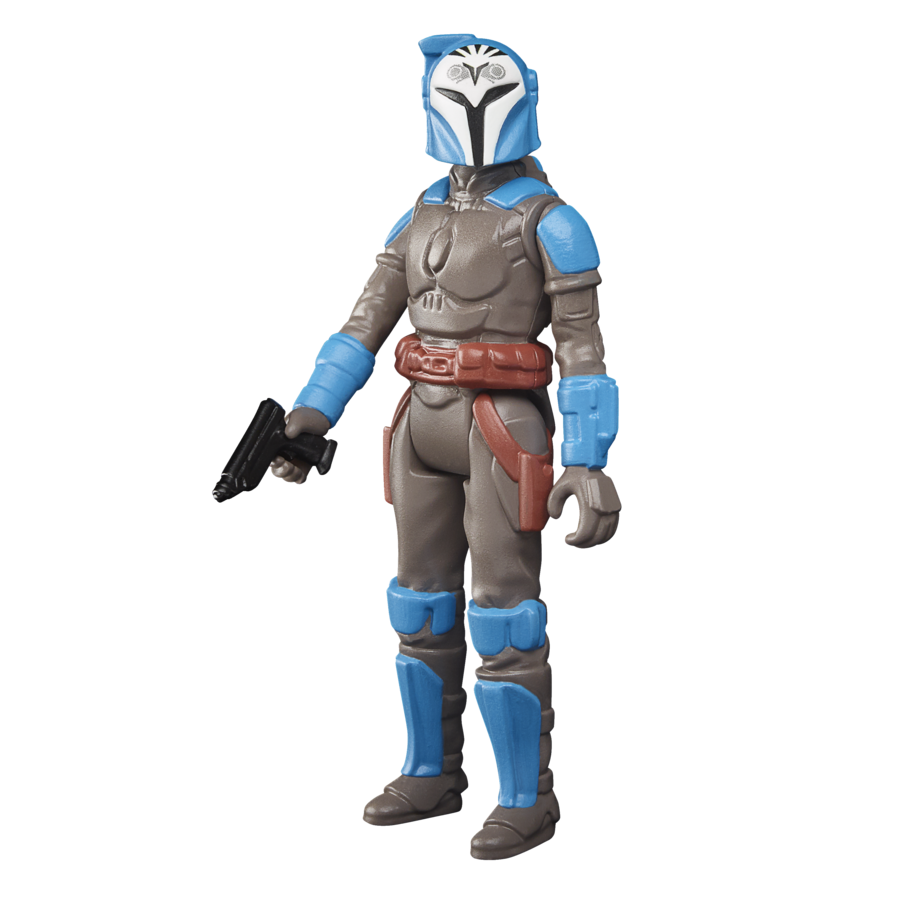 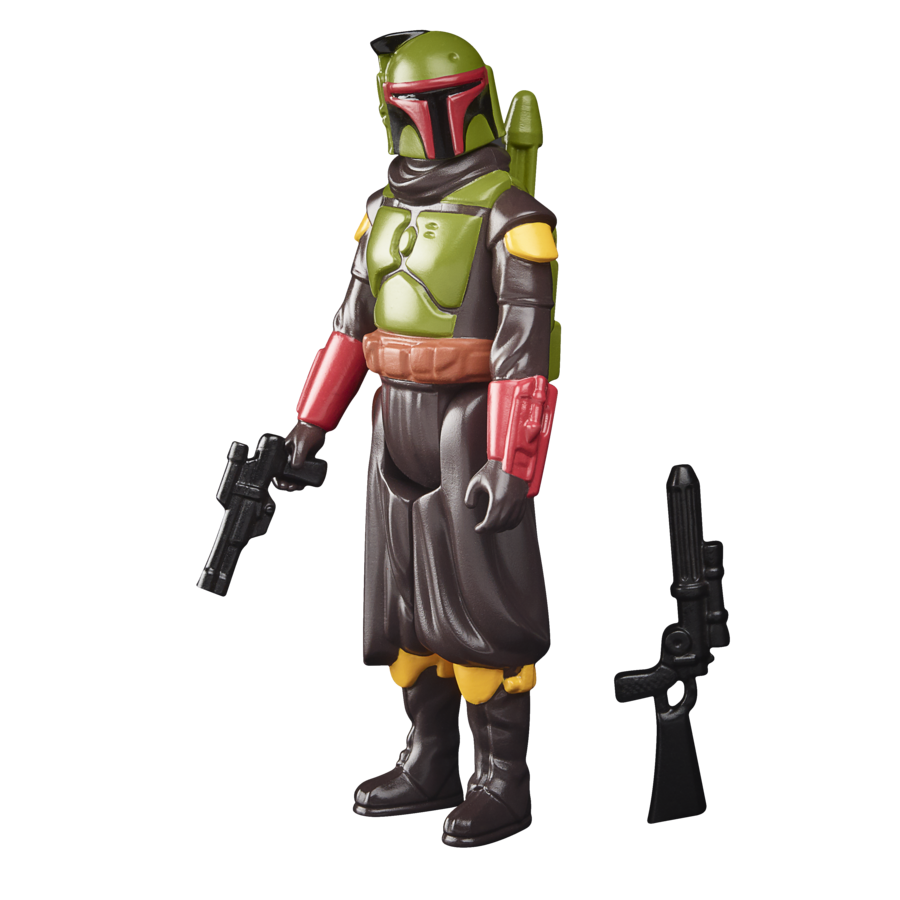