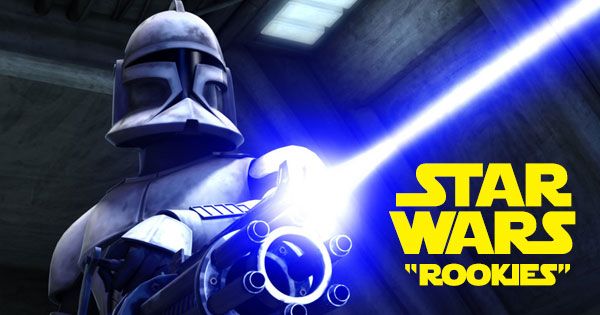 With the return of The Clone Wars to television, I happened to notice that Disney+ had a full set of essential episodes to watch before the return of series (this Friday, February 21st, only on Disney+). Being a huge fan of the series I knew that there one was essential episode to the series that had to be on that list. If it was not there, the list itself would be sub par. I skimmed through the episodes and there it was, "Rookies". This episode changed everything for me. However, I thought it would be best to unearth my original review of the episode and let my older self break it down for you.

The review below was posted to the website Mania.com in October of 2008.

“The best confidence builder is experience”. Fitting words that appear in front of the fifth episode of Star Wars: The Clone Wars. The first couple of stories in the series, the "Malevolence" arc, were really nothing new. The Jedi are trying to stop the bad guys who have created this bold new weapon. That arc was better than the Star Wars: The Clone Wars film however, stories that venture away from the prattling of Anakin (Matt Lanter) and his new Padawan could be the saving grace of this series. Those first words on the screen ring true for the “Rookies” episode. With the film and the first story arc behind them, Dave Filoni (series director) and Catherine Winder (producer) have finally delivered a hard hitting story about clones in this show called The Clone Wars.

“Rookies” shows a lot of experience and risk in the storytelling by leaving the Jedi outside of the story. Captain Rex and Commander Cody (both voiced by Dee Bradley Baker) go on a routine inspection tour of a tracking station. The rookies or “shinies” (called that because their armor is brand new) feel as if there was a bright spot in universe they are the furthest from it. There is no action on the outpost just the Grand Army of the Republic Radio to listen to and plenty of time to read field manuals. The Sergeant, Echo, Heavy, Cut Up, and Fives are then visited by the new Separatists Commando Droids (arriving like probe droids from The Empire Strikes Back) and everything falls apart.

Dee Bradley Baker does a superb job of giving all the clones different characters. The only fault with the entire episode is that they all look alike. Being "shinies" gives them little character distinction just by looking at them. As the episode progresses they get maimed, killed and eaten eliminating this problem.

The humor of the show has not been done very well before this episode. For some reason the writers and producers think it is hilarious to have Battle Droids (voiced by Matthew Wood) tell jokes. Often this sad attempt at humor comes too often and at the wrong time. Perhaps this is over my head or intended for children but why is the show on at 9 PM then? “Rookies” did a classic Star Wars joke and it actually fit the episode. There were a few additional moments that became comical when the clones themselves doubted the validity of their own plans.

Captain Rex was the singular highlight of the Star Wars: The Clone Wars film. Here he and Commander Cody really take center stage. They set the bar not only in the kind of stories that should be told but the quality of them as well. After the prequels the Jedi seem omnipotent. What can’t they do? If Star Wars is going to survive with this animated series the Jedi need to take a back seat and let the Clones take center stage. By having Rex play an intricate part to the stories the writers are free from the Star Wars cannon. Cody appears briefly in Star Wars Episode 3 Revenge of the Sith but Rex, until The Clone Wars film, has remained outside of that cannon.

“Rookies” was the turning point for this Star Wars fan. It kept me from turning off the TV and enabled me to give this show another chance. All because a little thing called Star Wars crept back into that TV show called Star Wars.

<end of the review>

Looking back, I was glad that the writers of the series didn't focus completely on the Clones. Where would Star Wars be today without Ashoka and Anakin's relationship? In looking back I cannot but help notice how strong, again, this episode was. It's the one I start everyone out on who asks? "Where should I start watching". Certainly, they want to see the likes of the Mandalorians and Maul's return, but here we get a sense fo the possibilities and path that the series will take and eventually strive towards to make it so beloved by fans. #theclonewarssaved