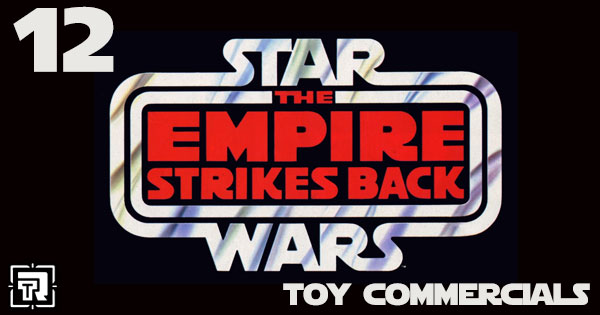 This year, for #StarWarsDay 2020, we thought we would look back The Empire Strikes Back. A film, that this year will celebrate its 40th anniversary! The Empire Strikes Back was a juggernaut of toys. This time Kenner was ready and boy did they bring it. Enjoy this helping of commercials that highlight the insanity of what being a Star Wars fan in 1980 was like. May the Force be with you... always.

The Empire Strikes Back Toy Collection
Ah, the days when there were only 47 action figures to collect.

Star Destroyer Playset
What a great to throw you off from what happened in the movie.

Slave 1
One could say it was the only Star Wars Vehicle to come with an "action figure".

Han Solo, Lobot, Ugnaught, and Lando Calrissian
Han didn't say "Long Live the Alliance" as he was being frozen.

AT-AT Commander and Zuckuss
Two of these characters are dressed for the winter. Come on Kenner, what are you doing here?

Tauntaun and Wampa
Did you see the Mom in the background fixing the flowers?

Star Wars Toys The Empire Strikes Back Collection
Yikes, Cloud City is a mound of dirt!

Turret & Probot Playset
You can use the lever or your imagination. Either one will destroy the Imperial Probe Droid!

Darth Vader Carry Case
Loved it, still have it, always on the lookout for another!

Rebel Transport
I love how they call them by the toy names and not "Rebel Scum "or "Imperial Nerf Herder".

Millenium Falcon & Snowspeeder
Where is Han and Lando? Why is some nameless Rebel Commander flying the Falcon?

Yoda and R2-D2 (w/Sensorscope)
This one is pretty spot on in relation as to what happens in the movie.