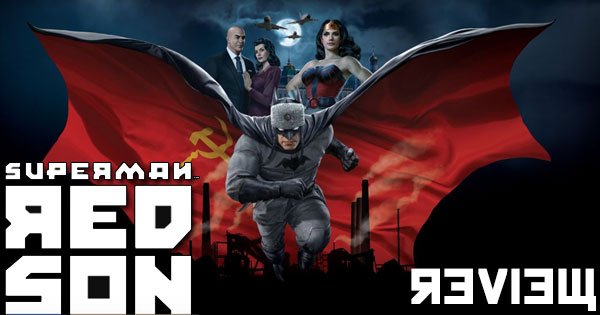 Any time that Warner Bros. Animation releases a DC Comics story, there are always fans that hold up their original comic books or their trade paperbacks and scream that it is not as good as the source. I get it, I understand it, but at this point, fans should know that the confines of a 90-minute story are never the same as the voice or pace of your mind when you read the tale. I read a lot of these tales and watch most, if not all, of these films. This time around I decided to let my memory of Mark Millar’s comic tale fade (I didn’t revisit it) and see what Executive Producer Bruce Timm (Batman: The Animated Series) and Director/Producer Sam Liu (Reign of the Supermen) concocted. Both of them, I respect a great deal.

‍
For those that do not know Mark Millar’s 2003 3-issue comic book, it is an Elseworld book in the DC Comics mythos. A what-if story that takes one central and familiar character and places them in new surroundings. We’ve had tales where Batman battles Jack the Ripper, in “Gotham by Gaslight”. Thomas and Martha Wayne found Superman’s rocket ship and raised Kal-El in “Superman: Speeding Bullets”. This time, our story at hand deals with a young Kal-El crash landing in the Soviet Union and not the United States titled “Superman: Red Son”.

Superman (voiced by Jason Isaacs), is a symbol of the people for General Secretary of the Communist Party of the Soviet Union Joseph Stalin, all that is right, powerful and true for the Soviets. On the other side of the world, we find that Lex Luthor (voiced by Diedrich Bader) is a brilliant inventor who is looking to put America on top of the Cold War. His wife, Lois Lane (voiced by Amy Acker), is the Editor and Chief of the Daily Planet. They all collide after a Soviet satellite is about to crash in Metropolis. Superman saves the day, as a gesture of goodwill… or is it? Perhaps it is nothing more than a display of powers in the true arms race of the Cold War- the propaganda machine.
‍

Mark Millar did his homework and brilliantly placed America’s favorite hero on the opposite side of the Iron Curtain. Here he uses both Superman and Lex Luthor against the viewer. How? We know that Superman is always the good guy and Luthor is his villain. Years of Saturday morning cartoons have taught us that much. What Millar accomplishes in this preconception, for this tale, is that though Superman is inherently good, the ideals and practices of Joseph Stalin and Karl Marx aren’t practical. Will they work with a Man of Steel enforcing those ideals? Luthor always being the villain is another cliche that Millar uses against us. What if Lex was the only person smart enough to stand up against this Superman? As Americans would we want, or be able, to even see his sinister plans if there were any?

This plays out very well in the 84 minutes that Bruce Timm and Sam Liu crafted. Thankfully, it is the heart of the story and the brilliance of the telling of it. As with any Elsworld tale, there are always ramifications for other characters. Batman (voiced by Roger Craig Smith), for one, is not Bruce Wayne, but a young boy that Superman liberates from the gulag. Growing up under Superman’s rule, he sees what his beloved country has become and decided to make a stand. Wonder Woman (voiced by Vanessa Marshall), remains the Amazon Princess, only here, she finds an easy alliance and has faith that Superman will unite the world. These two side characters only help to push the Superman/ Luthor story to its climax. All in all, if the story lacks any true sidestep or character development, it may be with the Green Lantern. Perhaps there should have been just a few more minutes of build-up for these men who believed that they could stop the Superman.

It all comes back to Superman in the end. Despite growing up in communist Russia, Superman, at his core, is a hero- a good man looking to do the right thing. It’s his short-sightedness and trust in others that are his downfall. In the universe the we know, Superman has Batman, Wonder Woman, and the Justice League to believe him and set an example. Take away those allies and what you have is Superman: Red Son, a man with a singular vision, and it's flawed. Flawed heroes make the best kind of stories. If you have never seen or read this, you are going to love it.