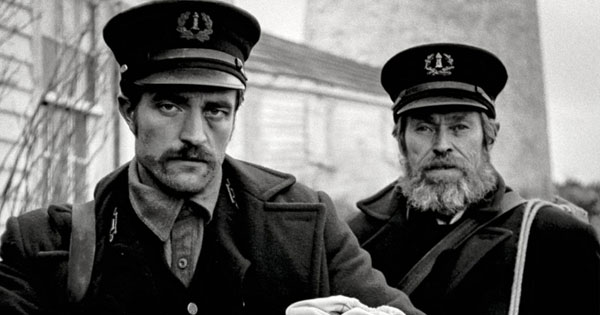 In the current age of movie making, original concepts and thoughtful creative production are luxuries the fast-paced, money driven industry cannot afford. For this, credit must be given to filmmaker Robert Eggers, who blazed a welcome trail with “The Witch” by dialing the bells and whistles down a notch. He created, for all its faults, a haunting, well-acted, genuine piece of artistic cinema. It is not surprising, then, that attention must be paid to “The Lighthouse”, Egger’s latest project, which is already receiving acclaim in indie film festivals near and far.

The story centers on ex-lumberjack, Winslow (Robert Pattinson), who takes up work and residence at a gloomy lighthouse on a small New England island to assist the aging keeper, Thomas Wake (Willem Dafoe). What unfolds is a slow, painful, descent into madness in the midst of isolation, drunkenness, and maybe ghosts? The waves pound the rocks and the gulls and sea spirits lurk and loom as the tempestuous relationship between Winslow and Wake unravels and explodes.

What will appeal to film lovers straight away is that “The Lighthouse” was shot on 35mm black and white Double-X 5222 film. It was even augmented with vintage lenses to give that real old-timey feel. Indeed, the cinematography is dripping with savory soft light and bold shadows that compliment the eeriness of the setting perfectly. One will also appreciate the obvious influence of Melville and Stevenson, and a host of other writers and artists who famously captured the world of the Seaman.

The other best part of the film is Dafoe’s performance (which should come as no surprise). If there had been a standard for the way his character should be played, Dafoe knocked it out of the park. In fact, I guarantee you’ll forget to breathe during the delivery of his “sea curse” monologue. Sadly, as much as Pattinson tries, and despite the camera being focused on him most of the time, his performance doesn’t hold a candle (no lighthouse pun intended).

Like “The Witch”, “The Lighthouse” is a trippy, unsettling, performance-centric piece that will send viewers into sensory overload. Indeed, one might experience more of a psychotic episode than a movie-watching experience. This seems to be a common result when Egger’s visions are translated to screen and, while I appreciate what he is trying to accomplish in terms of creating an experience, I once again find myself captivated during the first act, only to be let down by the second. Like biting into a jelly donut with no actual jelly, what we have here is a beautiful and intriguing shell of a film that promises more than it can deliver.