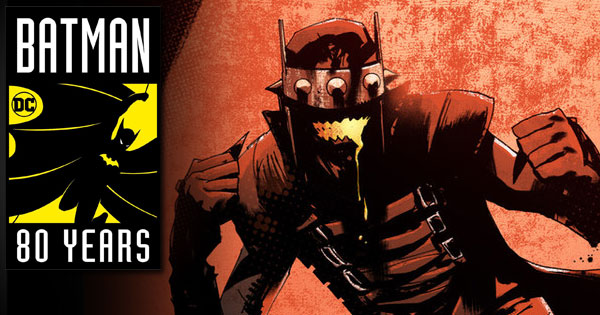 The Problem with The Batman Who Laughs - #Batman80 Column

The problem with The Batman Who Laughs. A look at the relaunch Batman/Superman books (1-4). There will be spoilers ahead.

A majority of the Batman/Superman books have led to some pretty amazing stories. Some of which have been made into damn good animated movies as. In fact. We'll definitely be looking at those books in the near future as I consider them to be must reads for Batman and Superman fans. I was excited to see the solicitations of them relaunching this title. I hate the gimmick of restarting a series just to have that "Number 1 issue" again, but I felt that this was definitely a series that needed to continue on. It only had DC's two most popular characters after all.

The only part that I was bummed about was the inclusion of The Batman Who Laughs (TBWL) on the first cover. Since his debut and rise in popularity, DC has saturated its books with him. I Initially, and in many ways, am a fan of the character. I actually own a wallet of the character drawn by Jim Lee. However, DC has had a hard time creating new villains, so I'm guessing the thought was to bring him into the main focus and Batman/Wolverine syndrome the character. In case you were wondering, that's what fans reference as those two characters were put in almost every title the two publishers had at one point.

I think they should use TBWL when appropriate but sparingly. He's already been in multiple story arcs as well as his own limited series. Now he's back and making other characters "who laugh" before their names. Between the merchandise being pumped out and the character showing up everywhere, it's become old hat, and honestly boring. I found myself fatigued reading these books honestly. The excitement wasn't fully there, at least for me. The books start out general enough. Batman fighting some of his rogues and Superman coming in at the end to help wrap things up. They are put on a case of a kidnapping of a little boy by Commissioner Gordon and eventually find The Batman Who Laughs' Batcave. In it they discover that six Batarangs had been cast with Nth metal. These Batarangs were poisoned with the same Joker toxin that created TBWL.

We are then introduced to The Shazam Who Laughs. Meh. Again, personally it feels to be old hat. There is a crossover single shot "King Shazam" but I haven't gotten around to it yet. Again, these books were hard enough to get through. The Batman Who Laughs has a plan. A plan that revolves around turning certain heroes in "Who Laughs" character. The plan is to bring TBWL's watchtower from his Dark Multiverse to the regular continuity to infect the world.

After 4 books, I'm pretty much done. I have no desire to finish the story. There is no eagerness or excitement. I really hope DC can somehow turn this around. I can't be the only fan who has had enough of TBWL already. He would've been a perfect special occasion villain. After his limited series he should've stayed away for a while. At least in my humble opinion. Definitely won't recommend this title to anyone reading. It's a swing and a miss.