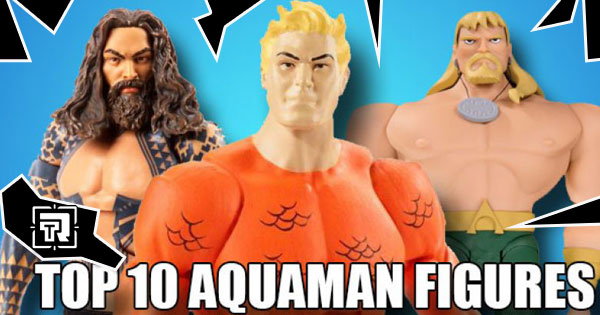 Never did we think that this list of Aquaman figures would be so difficult to post. When we did unearth one, we suddenly found 1 or 2 more that we never knew existed. It was as if we suddenly found the coolest figure ever and then two more to knock that one out of the pack. More often than not we find it difficult to list 10 good/ great figures for a character or property, however, this time it was difficult to post only 10. So, rest assured, these 10 below fought their way onto this list.

The following are in no particular order!

DC Direct leads the pack with this fantastic rendition of Aquaman from Alex Ross' "Kingdom Come". Most, if not all, of these figures, are leaps and bounds over what Mattel is doing right now. Sadly the market dictates that mass playability supersedes craftsmanship like this figure above.

Kenner really brought a Star Wars level of collectibility to their Super Powers line. Backed by years of syndicated cartoons, the Super Friends, and a hot cartoon Saturday morning property, this was was the best of what DC had at the time. Each figure had some sort of action to it as well, Aquaman had a deep sea kick.

Mego is back, however, they are only producing DC heroes in the 14-inch scale. Hopefully, Aquaman will get the green light soon. What we particularly love about this rendition are the gloves. Yes, they look like oven mitts, but that was the style back in the day.

This Aquaman, by DC Direct, has that right bit of smile from the Super Friends, the color design from the comics, and looks like a hero. Again, DC Direct nailed. Damn, we miss that line and the figures they produced. Yes, we know that they are now DC Collectibles, we're just nostalgic for 2009 toys.

This fantastic two-pack came with perfect cartoon renditions of Aquaman and Black Manta. To take it one set further it even came with stands for the figures and a mini version of Black Manta's ship.

In 2010 Aquaman was going through some changes, visually. In many ways, this leads us to the version of Aquaman in the upcoming film. Thankfully, the spear/ hook/ water hand has gone away. What we love about this Aquaman is that he looks like the King of Atlantis and not a happy go lucky guy who performs magic tricks.

Like his Kenner counterpart, this is the Aquaman, we all know and love. Call us sentimental, this is the Aquaman we secretly wanted in the film. He's not very realistic or gritty, but we are glad to see Jason Momoa wear the green and orange in those promotional images.

This is the latest offering from DC Collectibles and a great incentive to join DC Universe Streaming Service (HERE). Go DC Collectibles, keep cranking out these renditions from Bruce Timm's universe and we'll keep buying them.

The Pre-Order for the One:12 Collective Justice League Aquaman was over a year ago. He just arrived in the hands of the collectors and is, again, a top-notch release from Mezco. It will be interesting to see where this figure settles in price after the release of the Aquaman film, especially if it is a monster hit. Regardless, the one thing about One:12 releases, they retain their value.

Mattel released this tree pack with a re-creation of "Aquaman" No. 35 (from 1962 comic) which featured Aquaman duking it out with Ocean Master and Black Manta. This premium three-pack had detailed six-inch figures with 23 points of articulation, retro styling and interchangeable hands for a variety of combat conditions. Hands down, it was the best SDCC Exclusive for Aquaman ever.