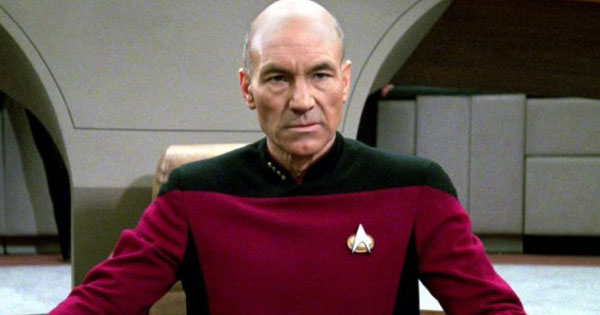 Picard is back, baby! Well almost (January 23rd), and we thought it was a prime opportunity to lay out 10 episodes from Star Trek: The Next Generation that not only highlight the character but gravitas that Patrick Stewart brought to the role. These episodes will help fans both old and new (the Millennials) appreciate the scope of what more Star Trek: Picard stories mean. Only TV episodes here, all of which are available on Netflix, Hulu, and CBS All Access. #makeitso

Editor's Note: Below you find the original teaser for the 10 episodes and a reason as to why we picked them.

This is one of the few episodes of STTNG where Picard is totally on his own. A group of terrorist sneak into the Enterprise to steal its toxic waste (during a routine cleaning) and Picard is the last man on the ship to defend it. Think Mission Impossible with Jean Luc!

Forced to take a vacation Picard gets involved with time traveling aliens, the Ferengi, and a Femme Fatale. "Captain's Holiday" is both exciting and fun, without ever being campy.

Part one of "Gambit" is all set up. Picard was killed and the crew of Enterprise wants to know why and hold the people who did it accountable. Turns out he faked his death and threw himself in with a band of pirates who are seeking out a superweapon. Genre fans will love seeing Richard Lynch, a classic TV genre villain actor, and Robin Curtis, Search for Spock's Lt. Saavik, back in a new Trek role.

Picard is forced to protect a woman (Famke Janssen) who is to wed a world's leader. She can adapt her personality to be with whatever her "mate" needs to her to be. It does not end well for either of them.

A fantastic episode where Picard is given the "It's A Wonderful Life" treatment in reverse where he changes one thing in his past. Oh, and all this is thanks to Q (John de Lancie).

We could literally write volumes on these two episodes. This is where the whole game changed for The Next Generation and where the fans and studio realized how much power the Stewart (acting prowess)/ Picard (the character) combination had for the series.

Again, the whole series changed in Season 4. Here we see Picard go home to France and his family to wrestle with what the Borg had done to him and the effect it had on so many other lives.

Picard is abducted and forced to live out an entire existence on an alien world. This may be one of the most heartbreaking and best performances in the history of Star Trek, ever.

Part 1 is all filler, but worth the setup. In part 2, Picard gets taken prisoner and is tortured by veteran actor David Warner. Basically, this is two great British actors with a table between them acting their asses off as interrogator and captive. You'll go out and hunt down the t-shirt that exists for this episode after watching it. Trust us.

As for the die-hard Trekkers, We haven’t forgotten about you!  We suggest the “Randomizer”. Josh Kowarski has created a search engine that randomly picks you an episode from every Star Trek series (except the animated series) via Netflix. You must be logged in to Netflix for it to work, but it really does open up the possibilities of discovering Trek you might not have seen before. Check it out here.