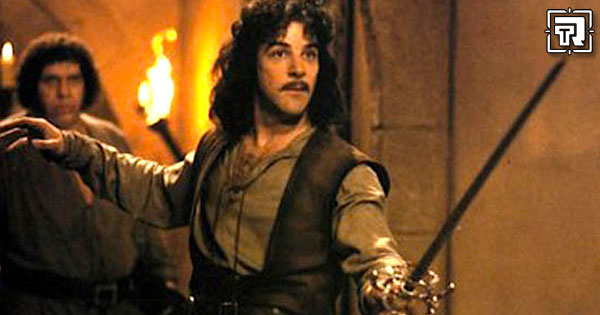 We decided to list our Top 10 Cinematic Sword Fights. How does a Star Wars duel rank against that of one from the Adventures of Robin Hood? Find out who made the list twice!

10. INDIANA JONES VS. THE SWORDSMAN - RAIDERS OF THE LOST ARK
All right, so it is just a tad lopsided but it is cinematic gold. The truth behind this moment is just as fun, not for the cast and crew, as watching it all take place. Originally, there was going to be a fight between Indy (Harrison Ford) and the Swordsmen (Terry Richards) which can be seen here on YouTube. It doesn’t compare to the final product (sorry about the music attached to this one).

9. WANG VS. RAIN - BIG TROUBLE IN LITTLE CHINA
This fight is absurd. These two men go flying through the air sword fighting from the hip without getting a scratch. This is fitting because the whole movie is absurd. What clinches it is when Wang (Dennis Dun) gives Rain (Peter Kwong) the “how about that” eyebrows. At that moment, you know Wang will emerge victoriously.

8. GANDALF VS. THE BALROG - LORD OF THE RINGS
To see it all happen, we do need to leave Gandalf (Ian McKellen) for a while. Peter Jackson really added scope to this fight by not only having its combatants fall but continue to fight all the way down. To watch it all still gives us chills.

7. ROBY ROY VS. ARCHIBALD CUNNINGHAM - ROB ROY
Who would have ever thought that Tim Roth (standing at 5' 7") could ever be a match for Liam Neeson (6' 4")? The fight itself is a bit long and drawn out; Roth does have Neeson in the palm of his hand the entire time. What places this fight on the list is the ending. It is like nothing you have ever seen before.

6. YU SHU LIEN VS. JEN YU - CROUCHING TIGER HIDDEN DRAGON
They aren’t many sword fights involving ladies in the real world. In Anime films there are several. In Crouching Tiger Hidden Dragon, these ladies battle not only with swords but a gallery of weapons making each moment fresh and unique. Ang Lee not only created a cinematic wonder with the film, he reinvigorated the sword fight.

5. WILL TURNER VS. JACK SPARROW - PIRATES OF THE CARIBBEAN: CURSE OF THE BLACK PEARL
By the time the first Pirates movie came out, filmgoers had seen it all when it came to sword fights. The trick here was to make it fun, establish a character for both our heroes, make it entertaining as hell and then have both of them live through it. Mission accomplished.

4. ROBIN HOOD VS. SIR GUY - THE ADVENTURES OF ROBIN HOOD
This was actually the rematch (between Errol Flynn and Basil Rathbone) to their 1935 duel in Captain Blood (seen here). It is, of course, played on a grander scale in The Adventures of Robin Hood. The lavish colors don’t hurt either.

3. DARTH MAUL VS. QUI-GON JINN AND OBI-WAN KENOBI – STAR WARS: THE PHANTOM MENACE
The time had come. Finally, we were going to see what Jedi, at their height, could really do. Episode 2 did have Yoda squaring off against Count Dooku and Episode 3’s final fight was long in coming. They both pale in comparison to this.

2. WESLEY VS. INIGO MONTOYA - THE PRINCESS BRIDE
Clearly taking its cue from the great Errol Flynn sword fights of the day. Rob Reiner crafted an elegant duel for us to not only witness but learn and care more about both characters. There hasn’t been a finer duel between two characters since. A credit to both Cary Elwes and Mandy Patinkin.

1. THE BRIDE VS. THE CRAZY 88 - KILL BILL VOL.
Who else but Quentin Tarantino could bring the samurai into the modern era? This sword fight also has scenes that are in black and white. Why? Censors. Who cares, really? It does make it so much cooler and the pure piece of pulp fiction it is.