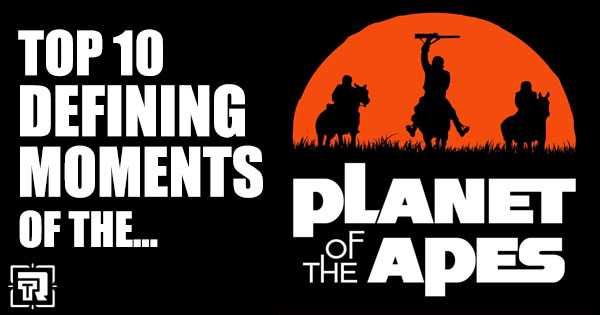 TOP 10 DEFINING MOMENTS OF THE PLANET OF THE APES

The Planet of the Apes, for me, was something that was passed to me by my father. He had recently introduced me to The Twilight Zone and thought I may like it. He ignited a strange obsession with me and truly one of the geekier things I love about Pop Culture. For me, it has always been the mirror that the Ape franchise, both past and modern, holds up to our own society. It is a way a looking at our own problems with the same thin veil of science fiction that made Gene Roddenberry and Star Trek household names. We have compiled our own "Top 10 Defining Moments" from the franchise.

What a Planet of the Apes TV series episode leading our list? Yes! In the third episode of the series General Urko (Mark Lenard) is trapped in an ancient subway with Astronaut Burke (James Naughton). Together they have to dig themselves out to survive. Ape and Human helping each other is not something new in the TV series. Galen’s (Roddy McDowall) relationship with the astronauts is the show’s very foundation. However, it is here that Gen. Urko learns the truth, that humans once had the superior civilization. It’s an earth-shattering moment for the character and shakes his very foundation. Imagine, everything you ever held dear and believed in was a lie. A lie revealed in a poster.

This is a quick moment and one that happened by chance, on set, while filming took place. At the moment it is easy to see its significance, know the truth as Doctor Zaius (Maurice Evans) does, it takes on a bigger meaning.

"The Hunt" is still powerful and shocking after all these years. This scene was actually in the trailer. You cannot say it was a spoiler, after all, it is the title of the movie. What makes it a defining moment is Taylor’s (Charlton Heston) face when he sees this animal riding horse in a civilized way.

Caesar Sees How Man Treats His Own Kind
Film: Conquest of the Planet of the Apes (1972)

Up until this point in Caesar’s (Roddy McDowall) life, he has lived among humans, who have kept his secret and treated him as an equal. After his friend and protector, Armando (Ricardo Montalban), is killed, Caesar is placed into Ape processing and conditioning. It is there he learns what his own people have been subjected too. The seeds of rebellion are sown in these few short moments of Ape horror.

Hasslein Wants to Stop the Future
Film: Escape from the Planet of the Apes  (1971)

Dr.Hasslein (Eric Braeden) is the obvious villain of the third Planet of the Apes film, however, his methods and reasoning are sound as he is just trying to prevent the end of civilization as we know it.   What would you do in his situation?

There are a lot of similar moments too from the new Ape franchise that are reflections of the old one. Koba’s (Toby Kebbell) betrayal of Caesar (Andy Serkis) is not one of these. This Ape betraying Ape scene might look like it for the most obvious of reasons, power, and control. However, here it is because they each have different conceptions of what humans capable of.

This should have been a great eye-opener for Taylor in the film, yet it completes proves his point to Doctor Zaius. No Ape would make a human doll could talk. The truth revealed in a human's ancient toy.

Caesar’s Speech - Original Intent and Theatrical Version
Film: Conquest of the Planet of the Apes  (1972)

This is an incredible scene, but not the one that is in the theatrical release. The original ending, seen above, was to have Governor Breck (Don Murray) killed by the gorillas. It tested so poorly that the Roddy McDowall came back and recording new dialogue. This explains why we see only shots of his eyes, during the speech. I think the original ending is incredibly dark and fitting for the tone of the film. With that being said, I like the change, it shows that the Apes, under Caesar can be better than their former masters.

Igniting the Alpha and Omega Bomb
Film: Beneath the Planet of the Apes  (1970)

Even with his brief screen time in the film, Taylor still gets to destroy the world he loathed so much. The irony here is that it is not the Apes that obliterate the Earth, it is still man’s hand that ignites the weapon.

The Statue of Liberty Reveal
Film: The Planet of the Apes (1968)

Like you didn’t think this was going to be our number one. It is one of the best and most iconic moments in all of movie history. Outside of its significance to the film’s story, this moment is so iconic that it has been on practically every box and poster for the film since. Talk about well-known spoilers, this may be the one that everyone knows on planet Earth.