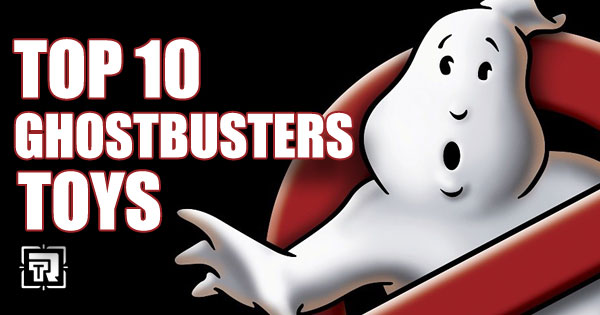 Today is the official anniversary of Ghostbusters (June 8th, 1984). So we decided to bring you a top 10 of the crew who battle the nasties that make those bumps in the night. We dove deep into the Ghostbusters collection of goodies to give you the full spectrum of items, enjoy!

Now I'm sure everyone is thinking, "how did a Walter Peck make it onto my top ten list?" Well, it's plain and simple. This figure doesn’t make it based on the merits of Walter Peck, no, it makes it solely off of the accessory that it comes with. There is no other way to have a close-to screen accurate Containment Unit. So, if you open and display your figures, this makes the Walter Peck a must-have. Also, for everyone who’s wondering, "yes, it is true, this man has no dick.

The most highly anticipated new Ghostbuster figures are coming out this Fall (finally). Some may prefer the Blitzway release, but I was lucky enough to see these in person at Toy Fair last year, and they looked amazing; the head sculpts are spot on and the jumpsuits and packs are killer as well. There is no doubt in my mind between how good they look and the price point, these will be the ones to look out for. I'm not going to lie to you, I am already a giant Mezco Toyz Fan. All I can say is I love Mezcos’ plan, "I'm excited to be a part of it".

This has to be one of the largest pieces in my collection and one of my favorites. From the cool carrying case to the full diorama, I don’t believe there was a better way to do Mr. Stay Puft. Though one of the biggest Stay Pufts ever released, I almost didn’t add it to the list due to some of the issues this figure has experienced over time (from the yellowing that caused Matty Collector to have to offer a return program to the soft material that they used that shows every ding and dent). Whenever I look at the face on the Stay Puft, plus the diorama, its clear yellowing or not, this is hands-down my favorite. I just keep telling myself I've been going about this all wrong. "This Mr. Stay Puft is okay! He’s a sailor, He’s in New York if we get this guy laid we won't have any trouble."

Where do I start with my #7 pick? The Retro Action line had me from the moment it was announced. I wasn't a fan of the Mego-Style figures but once they added in The Real Ghostbusters property I knew things were about to get real. This set hits so many high points from the series and the Ghostbusters all around. You get the Firehouse cutout (which is amazing) a Samhain figure, a miniature Slimmer, and "no she’s not a strange person she’s Janine Melnitz from our staff".

When I heard that Toys 'R' Us was going to get the exclusive Minimates The Real Ghostbusters line, I started saving my money right away. Then, I saw the lineup of the series. I was going to get my first action figure of my favorite character: The Boogieman! Growing up, being a Ghostbusters Junkie at a young age, the first time I saw "The Boogieman Cometh" episode I was hooked for life. It was the first time I had genuinely been creeped out by an episode. Even though it took so long to finally be made into an action figure, it's even more of an exclusive for me.  This toy came and saw and kicked my ass!

I knew when I started this list I had to have at least 1 slimed character included. For me, Diamond Select hit another home run with the Slimed Peter Venkman. This figures likeness and facial expression take you back to the moment many Ghostheads fell in love with the character for the first time. Staring down the hallway at slimmer on the radio “It's right here Ray, it’s looking at me”.

I had to have this in the top half of the list; my favorite Ray Stantz figure that has been made so far. This recent Diamond Select release captures everything you need to know about the heart of the Ghostbusters. Ray lives and breathes Ghostbusters, all day every day, and when he finishes working all he has to do is unzip his flight suit and he's good to go. Personally, I love the head sculpt on this figure, I think it’s very true to Dan Akroyd likeness and captures that smirk that made his character is so beloved. Don’t forget without Ray there would be no Ghostbusters, I mean doesn’t everyone have three mortgages nowadays.

This Ecto-1 hits that nostalgic groove for me more than any other item on this list. I can remember playing with the toy as a kid for hours and hours, or more recently, with the one that I bought my son to “play with."  Though many of you may be setting up a second mortgage to buy Blitzway's upcoming Ecto-1, I  would pick this one for my top Ghostbusters vehicle. Every time! All this bad boy "needs is some suspension work and shocks. Brakes, brake pads, lining, steering box, transmission, rear-end. New rings, mufflers and a little wiring".

This one finds its spot at #2 because it’s fitting tribute to the first Ghostbuster to make his way to the other side. The Courtroom Battle Egon figure was the last figure to come out of the MattyCollector line. I always enjoyed the MattyCollector line because for the true Ghostbusters fans, they gave you the largest range of figures. The first two from this series, Courtroom Ray and Peter, both came with a Scoleri Brother. For the Brains of the Ghostbusters, they fittingly included his tools and experiments that made Egon the eccentric genius character we all loved. Or as Peter would say “it’s always the quiet ones”.

Ok, I have to admit as a diehard Ghostbusters fan picking the #1 slot here took a lot of time and internal debate. I cycled through all the pieces in my collection and the few things I don't have that I thought would qualify a figure to end up at the top of my list. When it came down to it and I thought to myself, which Ghostbusters item did I have to have? Then, it became clear. It had to be the Lego Firehouse that I drove to Delaware (no state tax) and waited in line with ten other Ghostbuster fans for. This piece is on the pricey side but I can’t think of another item that gives you all the Ghostbusters, plus a bunch of other characters from the movie, all in one place. This giant set has so many fun little Easter Eggs and throwbacks to the movies and The Real Ghostbusters show that the franchise rights alone will make you rich beyond your wildest dreams!