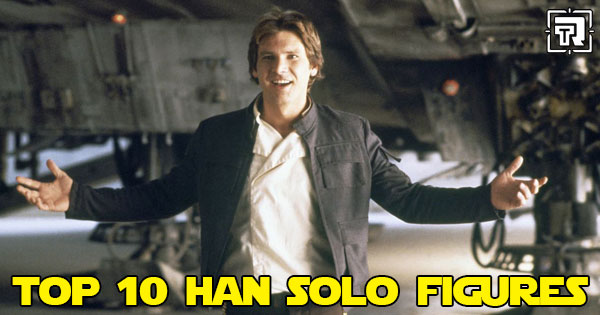 We thought it was the high time to highlight the past figures of our favorite smuggler. We dive deep here and opened the selection up to higher end collectibles as well. Agree? Disagree? Give us your choices in the comment section below!

Company: Hasbro
Year of Release: 2008
Film: Return of the Jedi
The Why: We start our top 10 list with a rare Han Solo. So rare that he came and went back in 2008 with little notice. He was part of The Legacy Collection Build A Droid line. However, it is that fact that this Han is from a deleted scene in Return of the Jedi. Yes, Junkies, we are going for its rarity, non-existent screen time, and straight-up coolness. Watch the deleted scene HERE on YouTube.

Company: Hasbro
Year of Release: 2007
Film: None (Pre-production)
The Why: Not the first Han Solo to come with a lightsaber! In fact, this is the concept Han Solo from Ralph McQuarrie's original designs that George Lucas commissioned. This whole line is fantastic, but only really something for the serious Star Wars fan!

Company: Hasbro
Year of Release: 2004
Film: A New Hope
The Why: There are a lot of Han Solo figures. In fact, when this Han debuted, Sra Wars figures had been back on the market for nine years (since 1995 POTF). Many of those early Hans were too muscular, too skinny, or just off in the face. This is a simple straightforward Captain Solo. Ready for whatever adventure you are about to take him on.

Company: Hasbro
Year of Release: 2010
Film: The Empire Strikes Back
The Why: In 2010 Hasbro, finally, released their figures in their original Kenner style package. This Han is somewhere between Hoth Han and Bespin Han from the old Kenner line. A Han to work on the Falcon in that cold hanger! Great unique accessories and cool points of articulation as well.

Company: Hasbro
Year of Release: 2015
Film: The Empire Strikes Back
The Why: The first Black Series on our list and a great two-pack featuring Han's noble steed from Hoth. This is the Hoth Han you want when the snow is mounting up and you want to take a few great pictures. The price is a tad steep now, then its initial release, but keep your eye out for a good deal on this one Junkies.

Company: Hasbro
Year of Release: 2013
Film: The Empire Strikes Back
The Why: What? Yes, Han is frozen, but it is still an action and the only one on our list with no points of articulation. This two-pack is the only way you can actually get a Black Series of Captain Solo frozen. It comes with a fantastic display and true piece for the Star Wars Junkie.

Company: Kenner
Year of Release: 1978
Film: A New Hope
The Why: To a regular person, they are the same figure. Die-hard collector's know that there is a Big Head Version and a regular version of the original 1978 Han Solo figure. Big Head Han was a tad harder to get into the Falcon's cockpit, but then again so was the original Chewbacca. To compare the two figures, Big Head Han does look more like Harrison Ford. Collectors will always prefer the one they had a kid. I had both and loved them both!

Company: Hasbro
Year of Release: 2014 (left), 2017 (right)
Film: A New Hope
The Why: Essentially the same figure, outside of the packaging, The Black Series Han Solo is/ was the Han Solo we always wanted. Two belts, two different set of hands, and more importantly a perfect likeness of Harrison Ford as the character.

Company: Hot Toys
Year of Release: 2014
Film: A New Hope
The Why: Yes, we just jumped into Hyperspace. Certainly, you will pay a lot of this set, but it is easily the centerpiece of any great collection. If Only they made a Falcon to this scale. Sorry Junkies, this set is sold out. Look for it on the secondary market (See the full listing HERE).

Company: Hot Toys
Year of Release: 2016
Film: A New Hope
The Why: Again we look to Hot Toys (distributor through Sideshow) for another stellar release. Harrison Ford's swan song for Star Wars, Episode VII, was exactly what the actor wanted and was heartbreaking for fans. What better way to immortalize that performance than by picking up this breathtaking Hot Toy. Sorry Junkies, old Han is sold out.