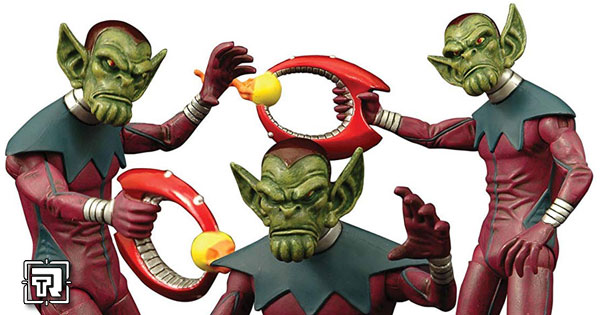 With the retro insertion of the character in the Marvel Cinematic Universe (because this film is a prequel to all that has come before), we are finally got the dreaded Skrulls. Yes, that alien race that premiered in Fantastic Four #2 (Vol.1, 1962) has gone from annoyance to legitimate threat for the characters of Marvel Comics. Since they have a long history in the comics, they also have a variety of action figures.

We often forget that Hasbro was troop building even back in 2010. Check out this "alien armies" two-pack of a Kree and Skrull soldier.
Release Date: February 2010
Company: Hasbro

Release Date: September 2009
Company: Hasbro
Yes, we know. Many of you are upset that Hasbro and Marvel have shifted to making primarily Marvel Legends and the Marvel Universe line (3.75-inches) has been abandoned. We haven't forgotten them and love this Walmart exclusive of Skrull Giant Man and Bucky Captain America.

Release Date: 2006
Company: Toy Biz
Sculptor: Phil Ramirez
Now the awesome thing about this Skrull is that if you don't want the "Thing" one, there is a Flaming Super Skrull and an Invisible (clear) Skrull figure too! Toy Biz really did set a lot of precedents for action figures before Hasbro took it on at full force.

Release Date: March 2007
Company: Toy Biz/ Diamond Select Toys
Leave to DST to bring us a 7-inch Skrull 3-Pack, but also in to put them in their original Fantastic Four #2 outfits. Here you get troop of aliens with funky ray guns!

Release: July 2008
Company: Toybiz/Diamond Select Toys
Certainly, the Skrull Warrior that comes with Skrull Elektra (aka "Pagon" from Marvel's Secret Invasion storyline) is a color variant from the previously mentioned 3-pack. Do we feel cheated by that? Hell no, one more Skrull for the army!

Release Date: 2010
Company: Hasbro
When Funko debuted the Pop! Vinyl line we really thought Hasbro was going to crush it because Mighty Muggs were out there in full force. Yeah... boy, were we wrong about that. The original Mighty Mugg may be long gone, but we still relish in their pop culture coolness.

Release Date: 2018-2019
Company: Hasbro
The most recent Skrull action figure on this list. We hope that we get another one and maybe even one with Ben Mendelsohn human head to swap.

Release Date: 1995
Company: Toy Biz
Toy Biz did love their gimmicks and we love this "super extending power punch action", complete with Thing arms! This Skrull is from the Fantastic Four cartoon series and worth picking up for its invisible feet and mini flames. We really do need a Super Skrull Marvel Legend in this style.

Release: November 2008
Company: Hasbro
Yep, Skrull Elektra is back only this time she comes with Ronin (aka Hawkeye, in disguise). This Marvel Legend two-pack is a hot item because not only do get the Skrull Elektra but one of the first, if not the first Ronin action figure.